Mnuchin says there’s ‘no signs’ of a US recession, defends Trump for using tariffs

U.S. Treasury Secretary Steven Mnuchin said Sunday that he sees “no signs” of the U.S. economy heading into a recession as he defended President Trump for threatening Mexico with tariffs to solve national security issues.

Mnuchin told CNBC on Sunday that the U.S. economy is “still the bright spot of the world” despite the May jobs report released Friday showing the U.S. added a less-than-expected 75,000 jobs last month.

“As it relates to the employment numbers, I wouldn’t focus on any one number: There’s plenty of volatility in these numbers,” Mnuchin told CNBC in Fukuoka, Japan, where he and G-20 finance leaders met over the weekend. “We still see the growth in the U.S. as really quite strong.”

Mnuchin said U.S. officials are more concerned about “what we see as a slowdown in Europe, China and other areas of the world.” 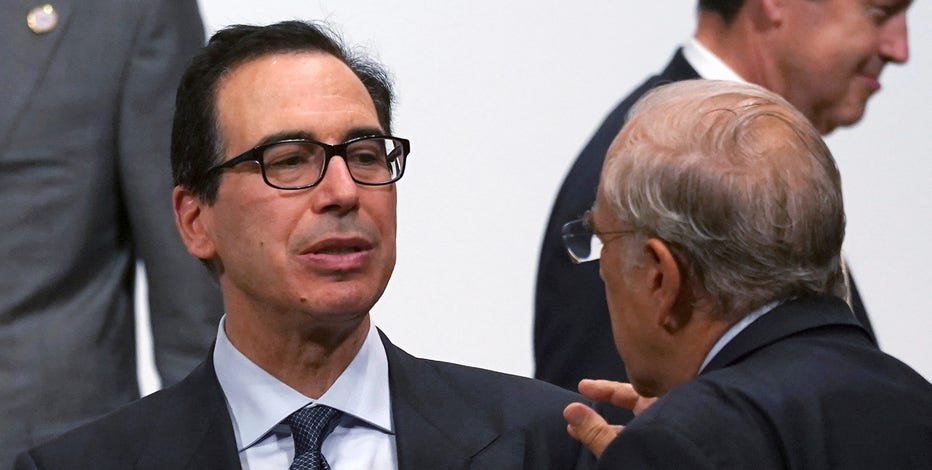 “I don’t see any signs of a recession. I would say the bond markets are predicting … a lowering of interest rates. We are in an environment where global interest rates are very low around the world, so I think that’s what you’re seeing in the U.S. bond markets,” he said.

“But, no, we see no signs of a recession. We see another strong quarter in the United States,” Mnuchin reiterated.

Mnuchin on Sunday also defended Trump for using tools such as tariffs to solve national security issues, saying Trump did a “great job” using the tools toward the country’s advantage. Last week, Trump threatened to impose a 5 percent tariff on Mexican goods if the country did not stop the flow of illegal immigrants and drugs across the border. The president announced the U.S. reached an agreement with Mexico on Friday, three days before the tariffs were set to go into effect.

“I think it’s very important that we have all these tools, that we use them. And President Trump has really done a great job at using these tools,” Mnuchin told CNBC.

Mnuchin said he “couldn’t be more pleased” that the U.S. and Mexico had reached an agreement before Trump’s proposed tariffs were implemented.

“The immigration issue was a very serious issue, we couldn’t be more pleased that Mexico came to the table and negotiated an agreement, and because of that we don’t need to put tariffs on them,” he said. “I have every reason to believe they [Mexico] will meet their commitments. But if for whatever reason they don’t, the president reserves the right to put on tariffs.”

The U.S., however, is still embroiled in a trade war with China that could intensify if Trump decides to impose tariffs on “at least” another $300 billion worth of goods. Washington also placed Chinese tech giant Huawei on a blacklist that effectively bars U.S. companies from supplying it with computer chips, software and other components without government approval.

Mnuchin emphasized Sunday that Huawei was a national security issue, not a trade problem, but said Trump may loosen restrictions against the tech company if he is satisfied with a trade agreement with China.

“As we’ve said all along, the Huawei discussions are really national security discussions, they’re separate from trade. Both we and China have acknowledged that,” Mnuchin said. “These are separate issues, they’re not being linked to trade.”

Mnuchin said he met with China’s central bank Gov. Yi Gang over the weekend but provided no specifics.

“Had constructive meeting with PBOC Governor Yi Gang, during which we had a candid discussion on trade issues,” Mnuchin wrote on Twitter.

Mnuchin told reporters after his meeting with G-20 finance officials that he expected that any major progress to resolve the trade war will come during Trump and Xi’s meeting at the G-20 summit in late June. The Treasury secretary added that Trump hasn’t decided if he will impose the additional tariffs he mentioned Thursday.