For all the excitement over what a trade agreement with China could mean for U.S. farm purchases, traders may just have to be happy with the first crack they get today at the headline numbers in the Phase One deal to be announced by the White House.

Why? Because the Trump administration has decided to withhold from the public a key component of the agreement that lists specifics of what and when China will buy in terms of U.S. agriculture.

Other Than Dollar Value, Little Clue For Grains Traders

What this basically means is that the 86-page document to be released after Wednesday’s signing will not tell traders how to exactly position their bets on soybeans and corn, in anticipation of China’s purchases of the two U.S. grains for animal feed and other uses.

What’s more, caution may be necessary on the part of traders, because Messrs Lighthizer and Mnuchin said on Tuesday that none of the U.S. duties applied on Chinese goods over the past 18 months will be removed despite the deal. The tariffed amount stands at more than $360 billion.

This basically means that aside from the dollar value printed on the document for purchases, it is pretty much up to China to decide how it wishes to proceed with its U.S. farm buys.

While there may be a deal that officials on both sides are privy to, the traders would have no advance knowledge of the details until they see the numbers reflected in belated data released by the U.S. Department of Agriculture — or get them leaked by sources in the right places.

Even With Deal, Trade War Not Over

Even more important, traders have to beware that for all intent and purposes, the trade war is far from over — proving precisely what Taoran Notes, a blog linked to China’s state-run Economic Daily newspaper, said.

Beijing has described the Phase One as “just the first round of a game” through that social media account,

“We must bear in mind that the trade war is not over yet – the U.S. hasn’t revoked all its tariffs on China, and China is still implementing its retaliatory measures,” said the Taoran Notes, which is used by the Chinese government to manage trade talk expectations. “There are still many uncertainties down the road.”

Phillip Streible, chief markets strategist at Blue Line Futures in Chicago, concurs. “Reports that Chinese tariffs are to stay on until after the U.S. election despite a trade deal, would merit further caution” on the part of traders.

Both U.S. and Chinese officials agree that to make the Phase One work, a Phase Two is integral. But reaching consensus on what is likely to be an even more vexatious round of talks seems daunting to each side, with President Donald Trump even suggesting that it be put off till after the presidential election in November.

So, back to the question of where this leaves soybeans and corn — as well as wheat, which, however, isn’t a major Chinese import.

Some analysts say U.S. grain prices have trended flat or higher since the start of this year in anticipation of better demand from China after the Phase One deal. 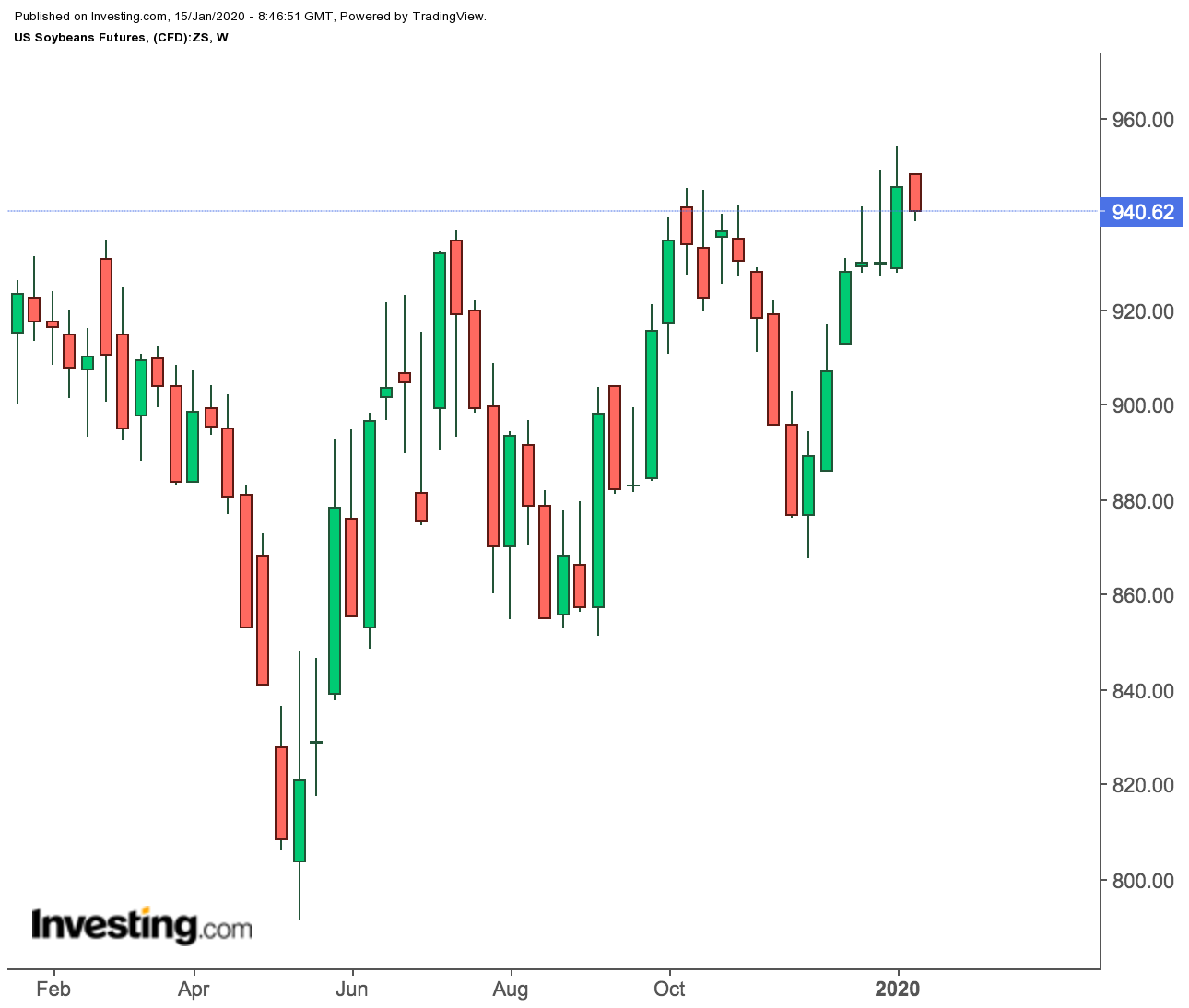 Some Still See Phase One As Catalyst For A Grains Rally

“The trade agreement is a likely catalyst and could have big implications for corn,” said Eric Scoles, commodities strategist at RJO Futures in Chicago.

He said the bigger factor driving corn now was demand. “If the U.S.-China trade deal moves forward there is huge potential for increased demand for corn; whether it’s for livestock feed, human consumption or production of ethanol.” 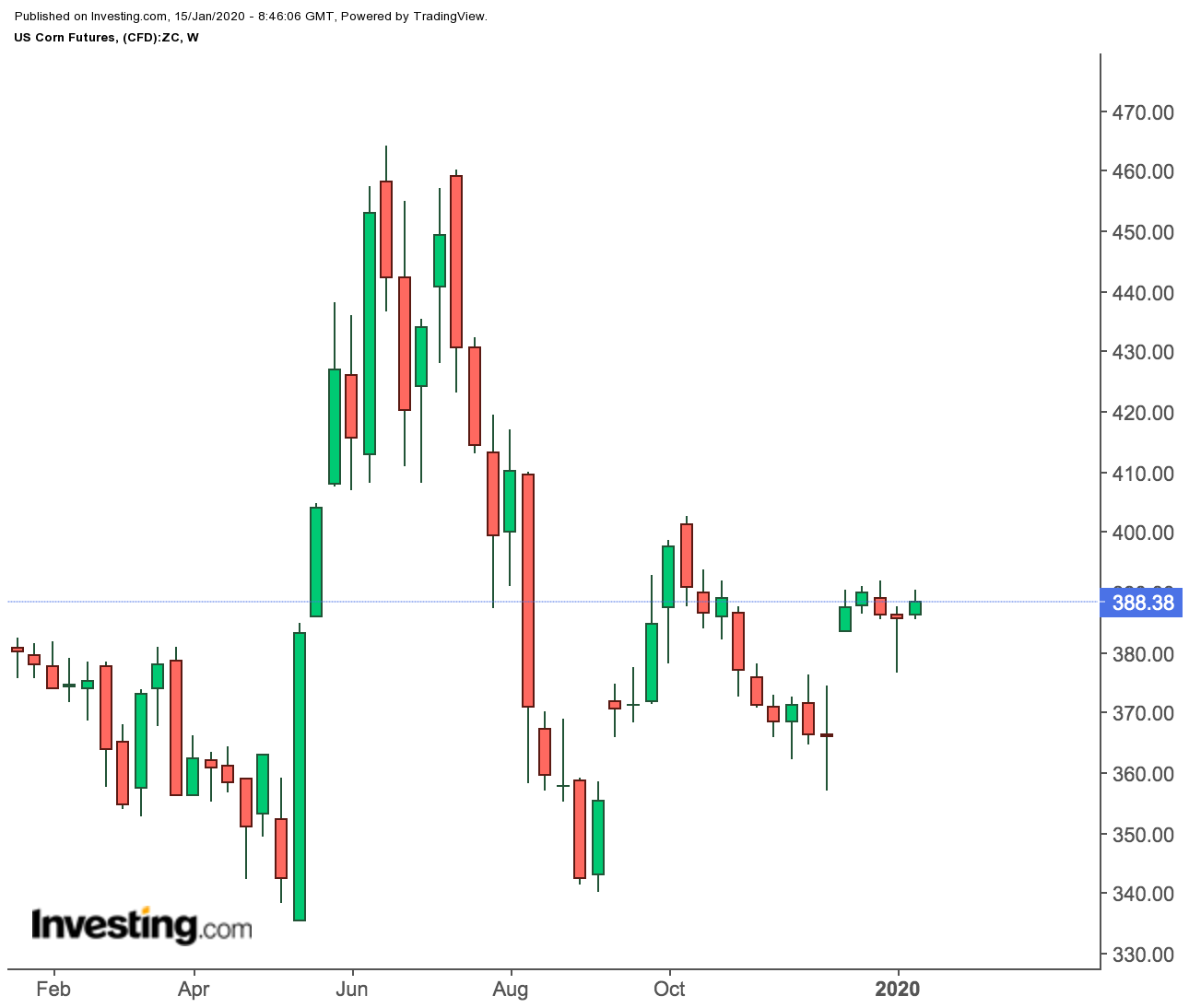 Investing.com has a “Strong Buy” recommendation on U.S. corn, projecting a near-term resistance of $3.92.

Investing.com also has a “Strong Buy” call on U.S. soybeans, projecting a near-term resistance of $9.57.

Investing.com has a “Strong Buy” recommendation on U.S. wheat too, projecting a near-term resistance of $5.88.

Here’s what China agreed to buy from ...