Is The Party Over For Palladium? Its Cheerleaders Might Not Agree

Based on logic, palladium prices should have continued crashing with stocks, and other assets carrying risk related to China and its debilitating coronavirus.

Yet, from what we know — or, at least, have seen — markets aren’t always logical.

Palladium, the world’s number one catalyst and emissions purifier for petrol- or gasoline-driven cars, was back in rally mode in Asian trading Tuesday, snapping a four-day red streak that had wiped nearly 9% off its prices.

The silvery-white metal was up about 1% on the day — relatively modest for a commodity used to setting one stupendous record high after another, as investors stayed in perpetual fear of its tight supply, amid worries that the world might one day run out of palladium. 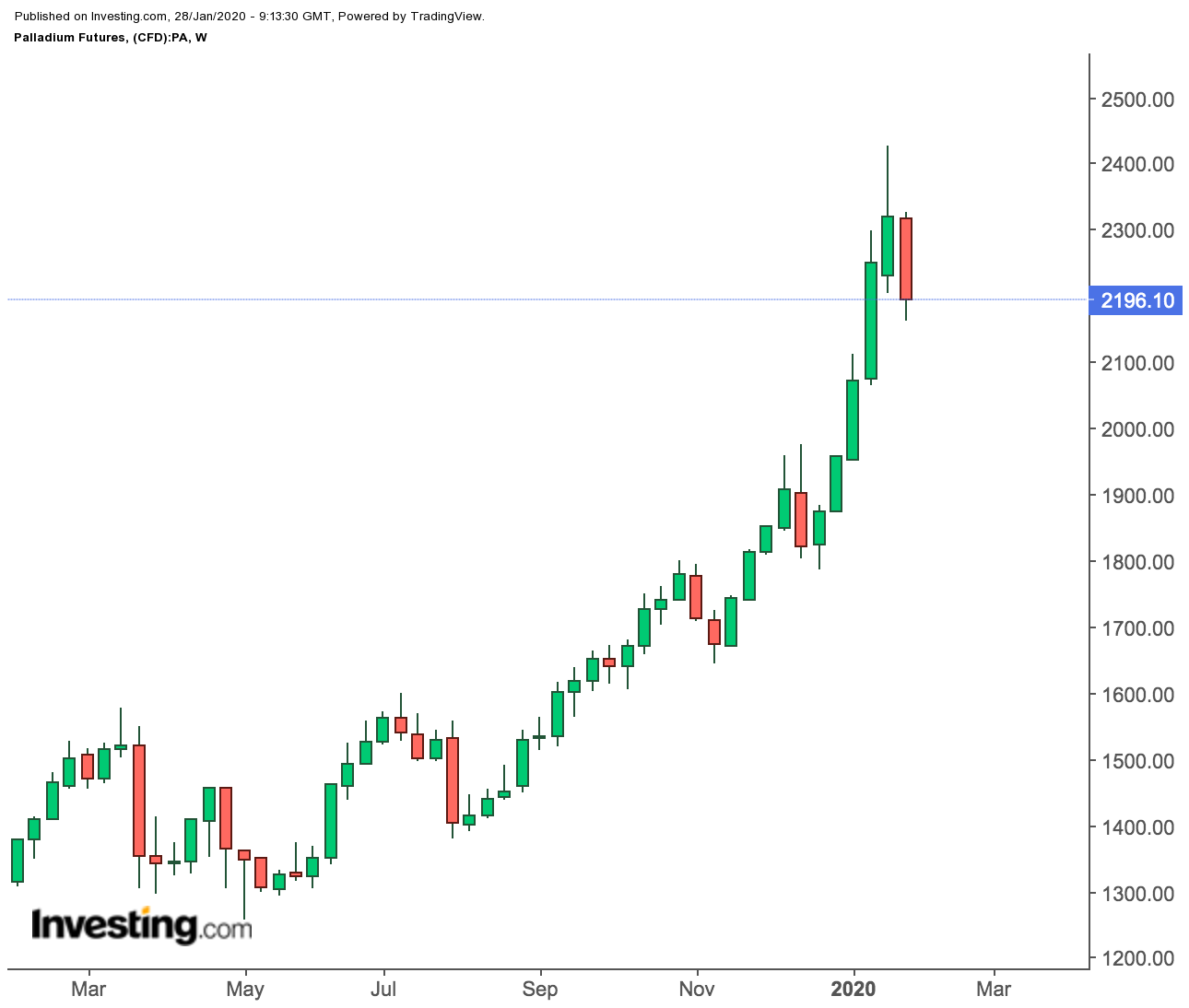 Whatever the case, Tuesday’s rebound in the precious metal seemed outrageous, when stocks in South Korea had crashed more than 3% amid broad declines in Asian equities and Wall Street’s biggest rout since October had occurred just a day earlier.

What’s Next For Palladium?

“Is there any stopping it from reaching another high?” Arkadiusz Sieron, an independent investment adviser, wrote on the Kitco precious metals site, referring to palladium. “What’s next in store for the white metal?”

While the year isn’t even four weeks old, palladium has gained four times more than , its best rival in precious metals. Ahead of Friday’s month-end, is up 20% for January, while show a 16% gain. In 2019, the spot market rose 48% and the futures finished up 55%, trouncing all major commodities. 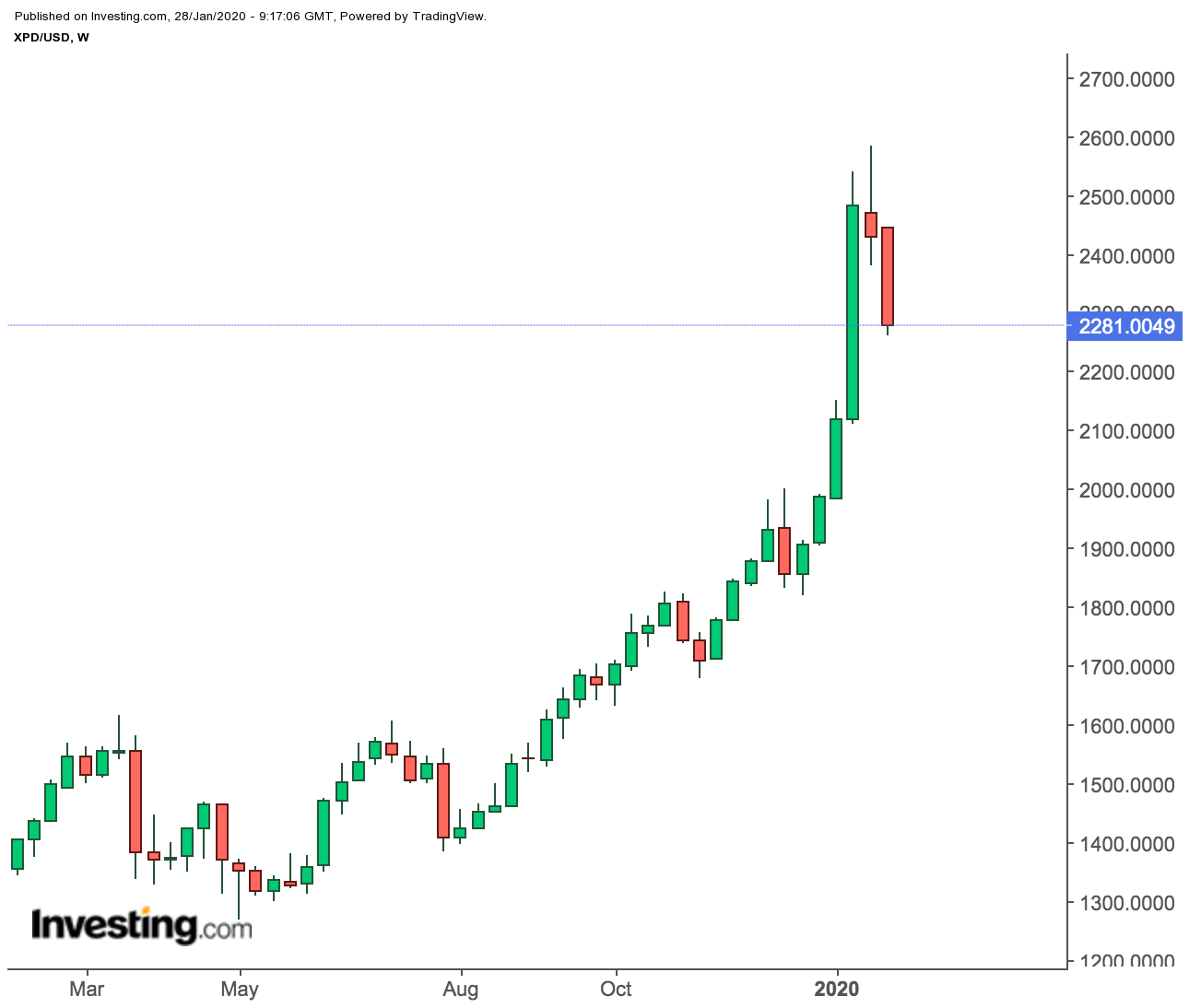 Analysts at Bank of America Securities predicted on Monday that palladium will reach $3,500 an ounce before it runs out of steam. That’s an 85% premium over last year’s close and 50% or more above current prices — though still lagging the metal’s astronomical rally of 1,500% since 2009.

Like most analysts, I can understand the upside price pressure that has brought palladium this far. We can all see the chronic squeeze on the metal’s supply in top producing centers South Africa and Russia and that there are very few practical alternatives for the automobile industry to this metal.

While there have been suggestions that the cheaper , which serves as catalytic converter and emissions purifier for diesel cars, can be a substitute for palladium, the cost of retooling auto factories for the change might just outweigh any cost benefits.

But It’s A Different Reality Now

To me, a palladium rally in the present circumstances will just seem surreal.

And my argument has to do with fundamentals too. Just like the supply squeeze that produced one record high after another for palladium, there should now be a demand vacuum for the metal as the Chinese car industry — the world’s largest— is going to be in the slow lane, thanks to the coronavirus.

China typically accounts for nearly 30% of world vehicle production, exceeding the European Union’s production or even the combined output of Japan and the United States.

Right now though, automakers are withdrawing employees from China and weighing whether to suspend manufacturing in the country as the coronavirus ravages industries across the board.

Automakers Taking A Break In China

Honda Motor (NYSE:) and PSA Group (PA:), (OTC:) are among the big auto names withdrawing employees working around Wuhan, the city of 11 million people that has become the epicenter of the viral outbreak, CNBC reported on Monday.

Manufacturing in China was temporarily halted in honor of the Lunar New Year, which kicked off this weekend, and normal operations are due to resume this week. But automakers across the globe with operations in China could keep their plants closed even longer, people familiar with the matter told CNBC.

As I said earlier, some logic should prevail now over palladium’s cheerleaders.

Where Is The Demand For Palladium?

China, the world’s largest carmaker, is in contraction and that logically means demand for palladium should at least be easing, if not shrinking, alleviating the months-long squeeze placed on the market. The shutdowns in China may not have made enough material impact for automakers to roll back on their demand for raw materials. Yet that could very logically follow.

Some will argue that the negative impact on palladium is more perceived than real, and that those bullish on the metal should stay the course, taking it to new highs. Yet if psychological fears related to Chinese oil demand can drive crude prices down 10% in a week, can’t a potential slowdown by the largest car producing country on the globe even stall the palladium rally?

Fundamentally, palladium should give back a chunk of its recent gains built on the notion of ever-increasing demand from automakers. If not, it should at least stop making crazy new highs in the interim.