Is Gold Having Its Last Hurrah For 2019?

The Fed pause couldn’t do it. Nor the safe likelihood of Brexit 2.0. And now, the partial U.S.-China deal— bears’ last big bet for the year—has been tossed to the wayside too as the haven continues reaching for the stars.

Something has happened to gold, and no one can figure out what.

For a market that just two months ago looked doomed after leaving its comfort perch of $1,500, gold has been rock solid over the past week.

The first was the Dec. 11 Federal Reserve decision that there will be no more in 2019 after the three back-to-back quarter-percentage-point reductions between July and October. Gold always tends to benefit from rate cuts, particularly if the reductions are sharp enough to prompt a massive switch of positions to gold.

Next up, was Boris Johnson’s landslide Dec. 13 reelection as U.K. premier, a win that paves the way for Britain to finally leave the European Union. Gold has been a hedge to Brexit amid its futile attempts to exit the EU over the past three years.

The last was the Dec. 15 cancellation by U.S. President Donald Trump of new tariffs on China that would have added another 15% duty on $160 billion of Chinese imports. More than the Fed and Brexit factors, the U.S.-China trade war has been the primary reason for gold’s outperformance this year as the yellow metal stood side-by-side with the dollar as a hedge to the showdown between the two global powers.

Three major bearish events and gold prices actually went up on the week.

Benchmark U.S. gold futures finished last Monday, or the first trading week of Nov. 9, at just under $1,465 per ounce. 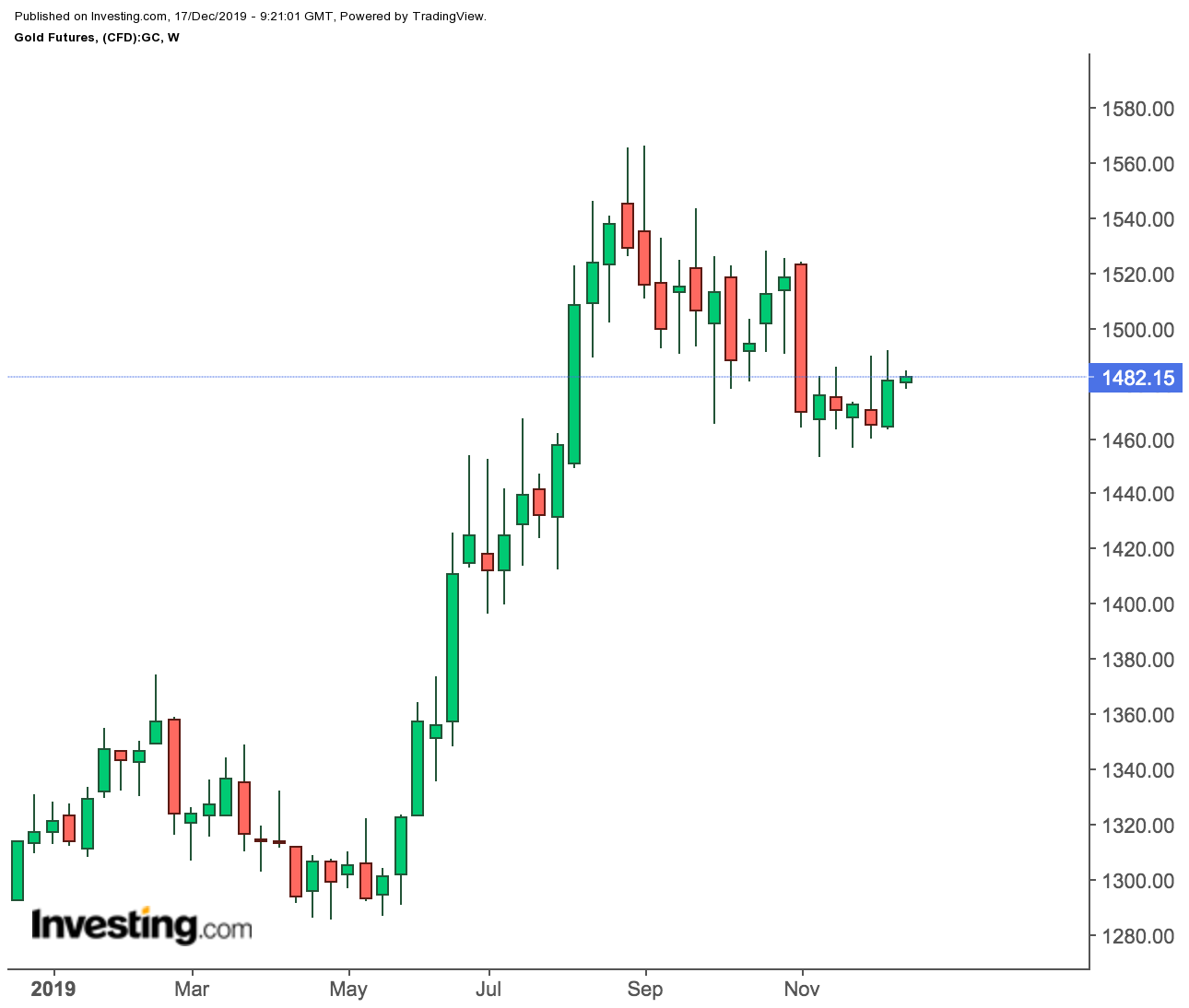 A weekly gain of $16, or 1%, may barely register for gold bulls at other times. But as outlined earlier, this was an extraordinarily trying week for gold and the fact that it did not crash makes the yellow metal an absolute winner.

All of which raises the question: Is gold on some sort of last hurrah for 2019?

Three months ago, some of the more optimistic analysts out there joined me in forecasting a $1,600 finish for gold this year.

While most of us have abandoned the top-end of our forecasts, we remain somewhat optimistic that a return—or at least a test—to the $1,500 level cannot be ruled altogether in the final two weeks before 2020. As baseball legend Yogi Berra would have famously said: “It ain’t over, till it’s over.”

Gold’s fairytale run for 2019 certainly isn’t over, though we’ll have to see if it has the gas and endurance to inch all the way up to $1,500.

Even without a return to $1,500 levels, looks poised to finish 2019 up 15%, while gold futures are showing an annual gain of 13%. Independent gold trader and analyst James Hyerczyk said in a post on Tuesday that gold futures had to take out the $1497.70 resistance to proceed to the $1,500 test.

“The market seems to be waiting for that one big buyer to launch a breakout to the upside,” he added.

TD Securities, one of the research houses that had a $1,600 target for gold in late summer-early fall, said one reason for the market’s comeback was the notion that the Fed could cut rates again if growth worries return in 2020. Therefore, for investors, maintaining a position in gold, even a modest one, might be key, the Canadian bank-backed broker said.

All Wild Cards, From Fed To Brexit And Trade War, Still There To Support Gold

“Gold has maintained its luster because the Fed’s reaction function remains asymmetric, which suggests they will either cut rates further if growth disappoints or stay the course if growth recovers, ultimately pressuring real rates further in either case.”

“This lends strength to the view that gold will continue to bounce higher into 2020.”

The Fed aside, both Brexit and the U.S.-China dispute remain major wildcards going into 2020 as no one knows for sure how the U.K. would cope without the EU and whether Washington and Beijing would not go back to having another showdown.

Whatever the case, TD Securities tells investors: “don’t expect much CTA flow into year-end in the precious metals complex” as Commodity Trading Advisors were often fickle, minimalists with trading volumes and commitments at this time of year.

Amazon sellers are the latest casualty from ...

Forty five to be the third impeached