Is Coronavirus A “Black Swan”? The Oil Market Debates

Being the first to call something is a privilege — especially if you’re right.

So when Olivier Jakob of Zug, Switzerland-based oil risk consultancy PetroMatrix termed the new coronavirus fear sweeping across the globe the “Black Swan event of 2020”, it raised more than a few eyebrows in crude markets. Oil traders wondered if the world’s latest health scare merited that label when so little was known about it.

Thus, before Thursday was over, at least two media outfits — Financial Times in London and The Globe and Mail in Toronto — ran in-depth analysis of the energy note Jakob issued during European hours that day, where he spelt out his innermost fears on the virus identified as the 2019-nCoV.

You’re probably reading the third analysis of the series, after I decided to just cite Jakob’s note briefly in my Thursday noon oil report for Investing.com, and leave the greater part of his text for later musing — which I’m doing now.

“2020 is starting with a Black Swan event in the form of the coronavirus,” wrote Jakob, who started PetroMatrix 14 years ago after serving companies such as Russian oil firm Lukoil and U.S. commodities group Cargill in different roles like trader and risk manager.

“A black swan event is an unpredictable event that is beyond what is normally expected of a situation and has potentially severe consequences,” Jakob went on to say. “This is an event that risk managers do not like.”

He said the potential impact of 2019-nCoV on oil — after the 18 deaths, more than 600 infections and lockdown of the Wuhan city of 11 million in China — has already outweighed this week’s crude supply outages in Libya and last September’s global oil disruption caused by the Saudi attacks.

“The recent supply events in Saudi Arabia or Libya are not black swan events as they included some market risk anticipation,” Jakob wrote.He added:

“The supply disruptions in Libya are far from being a real surprise, and for that reason, the headlines about it had a marginal market impact. The price impact of the Libyan supply disruptions will come through the physical market rather than the screen.”

“Full Surprise”, No Real Assessment Of Damage Yet

“On the other hand, the coronavirus came as a full surprise. It has the potential of having a major effect but no one can make a real assessment of it yet.”

Goldman Sachs said in a note on Tuesday it anticipated a 260,000-barrels-per-day negative shock to global oil demand on average, including a 170,000-bpd loss of jet fuel demand, from the 2019-nCoV. Its analysis was based on comparison with the 2003 SARS health epidemic which shook global markets, including oil.

Jakob acknowledged the relevance of comparing the coronavirus to the SARS, which also originated in China. But Beijing was more important to the world economy now than in 2003, and China’s increase in refining capacity will cause major stress to its energy industry and, consequently, the world’s, if its domestic demand faltered, he said.

As it is, spring demand for jet oil was already under question, he said, referring to the Goldman Sachs outlook.

“The coronavirus could be a weakness accelerator for refinery margins, which will then negatively impact the backwardation. The corona-virus is the return of “old-time” risk valuation in the oil markets,” Jakob wrote.

And while the advance of technology makes it possible to assess the reality of supply disruptions in less than 24 hours, “satellite imagery is of no help to rapidly assess the seriousness of the coronavirus, and that leaves the market to speculate about its impact — the same way that supply events led to wild speculation when there was less technology,” he concluded.

Sheppard says while traders may not yet grasp the full impact of the coronavirus, oil bulls already wavering in their conviction of the market’s inability to rally after the Libya supply disruptions will find it “safer to sell now and worry about the final toll later”.

OIl prices hit nine-week lows on Thursday, with down 9% on the year while , the global crude benchmark, sunk 6%. 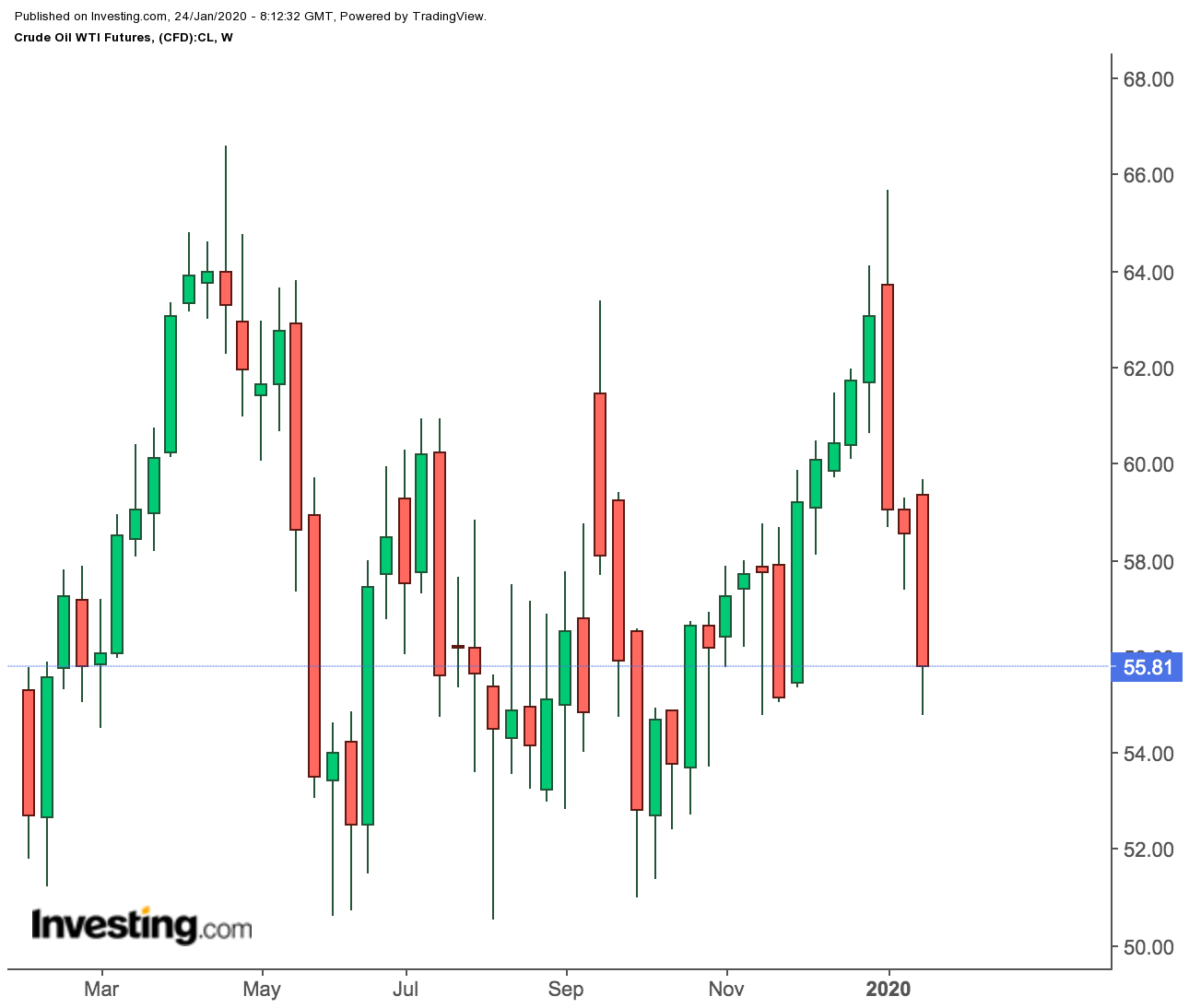 Sheppard cited countervailing research by London-based Energy Aspects that indicates demand for jet fuel will not fall dramatically this spring, arguing that the majority of flights were likely to continue even if they carried fewer passengers.

“But depending on how an airline hedges its fuel exposure, problems in the sector can have an outsized influence on oil prices, if buyers are forced to start unwinding various trades,” Sheppard said. “Traders are right to be cautious.”

Eric Reguly, European bureau chief for The Globe and Mail, said predicting oil prices “has always been a mug’s game”.

“And betting right in today’s market has proved especially difficult, even impossible, because of the arrival of a dreaded Black Swan event.”

He noted that Texas law firm Haynes and Boone had reported that that 50 U.S. energy companies, most of them oil and gas producers and oilfield services companies, have already filed for bankruptcy in the first nine months of 2019.

“How will oil traders and energy investors protect themselves from the coronavirus nightmare?” Reguly asked. “They can’t, really, for the simple reason that Black Swan events don’t play by any rules.”

From my perspective, I find it hard to decide if Jakob’s characterization of the coronavirus as a Black Swan is premature. Just two weeks ago, Dave Ernsberger, global head of commodities pricing at S&P Global Platts, called the oil tanker disruptions on the Strait of Hormuz after the brief escalation in U.S.-Iran tensions a Black Swan event.

We all know that wasn’t.

But like Sheppard, I agree that that fear begets fear.

Even if the real trading slowdown in oil due to the 2019-nCoV can be contained, the stampede to get out of long positions could do bigger and longer lasting damage to crude demand and prices.

We’ll have to wait and see.