Traders work on the floor of the New York Stock Exchange.

Stock investors are hedging in a big way against something scary coming at them this time next year and it could be related to the outcome of the presidential election.

The price of buying downside puts, meaning a negative bet on the S&P 500 is at a historical level compared to the price for upside calls, or an opposite bet in the option markets for higher prices, according to Julian Emanuel, head of equity and derivatives strategy at BTIG.

By this time next year, the Nov. 3 election will have been over for a little over a month.

“To hedge out past the election, the price of downside puts relative to upside calls is literally pricing an election apocalypse,” said Emanuel. “We have said it forecasts either a less business friendly attitude or a civilizational conflict with China after the election.”

Emanuel said it’s unclear which way investors think the election would go. “The left, the right and the center are all worried about highly unstable electoral outcomes,” said Emanuel.

Those fearing a less business friendly environment could be hedging against a Democrat, like Sen. Elizabeth Warren or Sen. Bernie Sanders winning. On the other hand, investors could fear President Donald Trump’s trade war with China will continue and get worse after the election.

Emanuel said if the hedging was for a month out it would not be that unusual. “But when you’re pricing an option a year out, that volatility is a big deal,” he said. 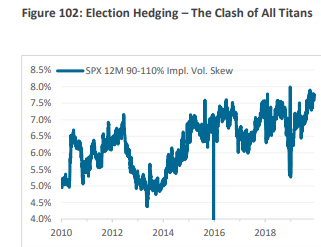 Emanuel calls it “unprecedented apprehension” on the part of investors. He said the S&P 500 skew, meaning how expensive puts are to calls, is in the 99th percentile and at a historic level over the election date.

Emanuel and other analysts say investors are placing bets on the election early, in this presidential cycle, relative to other years. He said sectors are also moving ahead of the election. For instance, health care started outperforming a couple weeks ago.

“You’re getting paid to take those risks. [Health care] is trading relatively cheap against the S&P 500, and its own price history, compared to 2016 when it came into the election season expensive and traded off the entire year,” he said.