bugs got the same memo as everyone else: “Don’t Fight The Fed”. What no one told them was they had to tussle with stocks for the same money the Federal Reserve was freely throwing to prevent markets from seizing up due to the coronavirus.

The trillions of dollars the Fed, Treasury and Congress have been — and will be — approving to disburse as loans, grants and outright aid to shield businesses and individuals from the sharpest downturn in American history is, without a doubt, great for that safe-haven called gold.

Yet, gold bulls that saw the pandemic as a chance to cross into the long-eluded territory of $1,800 an ounce — and even get to $1,900 where a new record high awaits — didn’t expect to be in such a dead-heat with stocks for all that stimulus money and near-zero U.S. rates.

In one of the most astounding recoveries ever from a collapse, the is down less than 4% on the year, after plunging as much as 33% in March, at the height of the COVID-19 lockdowns. The , down 36% on the year just three months ago, is off less than 8% now. Both indexes, incidentally, hit three-month highs this week. If that wasn’t enough, the tech-heavy has been positive on the year for a couple of weeks now, showing a 7% annual gain.

A Bumpier Ride Than Stocks

Gold futures are up nearly 12% on the year, while the spot price, which tracks trades in physical , has gained almost 13%.

But throughout the rally, gold has also been fighting to stay above $1,700. In April, it slipped to as low as $1,576 at one point. This week, the struggle was evident again, with gold futures getting to around $1,690, before rebounding to reach $1,725 on Thursday.

Each swing lower in gold has invariably coincided with a swing up on Wall Street, which often ran off with any stimulus news faster than gold could respond to, as a potential inflation concern.

And before the full impact of the U.S. fiscal response to the pandemic hit markets, gold has been hobbled by stocks in another way. In the early weeks of the crisis, as equities went into near free-fall, gold also crumbled, as investors dumped their profitable long positions to raise cash for margin calls on embattled stocks.

Dollar Has Been The Lesser Evil For Gold

All these have made stocks a worse nemesis for gold through the pandemic than the . While a strong greenback has traditionally tended to act as a drag on gold, it has proven a lesser evil this time, gaining just 5% on the year.

While “engagement in the stock rally is nowhere near 100%”, the dips, however, remain shallow and the price action consolidative, not corrective,” he said.

That makes gold vulnerable each time it crosses $1,750, and strong whenever it gets under $1,700. “The balance of probabilities is still suggesting that more downside pain remains for long gold positioning, possibly meaningfully so.” 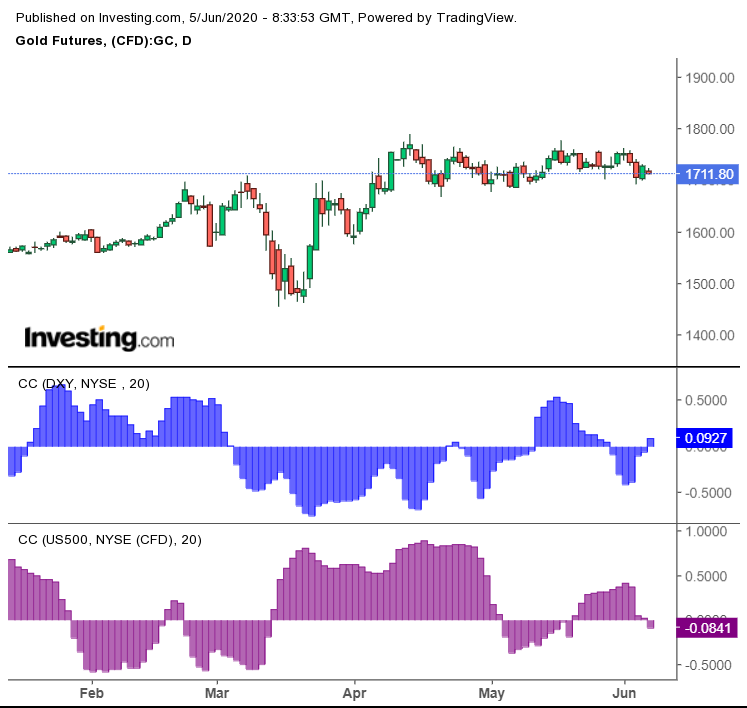 Gold Correlations With SPX And DXY

James Hyerczyk, a Florida-based technical analyst for gold, concurred. “August gold futures haven’t made a new high for the year since April 14,” he wrote on Friday.

“This tells me that investors are not willing to chase the market higher at this time. Their only alternative is to play for value, which is why I think bullish traders are going to allow this market to pull back into at least $1621.90 to $1582.40.”

Technically Challenged Maybe, But $1,800 Still A Target for Gold

Technically too, gold in a stalled mode, writes Rajan Dhall, analyst on FXStreet. “If the $1,750.00 per ounce level is broken, analysts can look for higher levels once more. Until that point, the Fib extensions on the downside could be the potential targets.”

“At the moment the 200 Simple Moving Average is providing some resistance and the price is also under the 55 Exponential Moving Average. The Relative Strength Index indicator has pulled away from the oversold zone allowing some more space for another move to the downside.”

Others have a more positive view.

“Yes, I recognize that we are in the midst of a major ‘risk on rally’, but at the end of the day there are so many moving parts out there that could cause problems,” said independent trader and analyst Christopher Lewis said in a column on FXEmpire. “It is extraordinarily difficult to get comfortable shorting gold anytime soon and of course we have plenty of support levels underneath.”

George Gero, long-time managing director for precious metals at RBC Wealth Management in New York, says gold is the only multi-hedge asset capable of meeting a rash of challenges from geopolitical unrest to currency devaluation, equity market correction and inflation.

“I feel this is a temporary good pull back just as the pull back … Over the long term towards the end of the year, I’m still looking for a $1,800 gold price.”