In Planning OPEC’s New Oil Cuts, Could The Saudis Have Forgotten Nemesis Trump?

In ‘The Best Laid Plans’, celebrated novelist Sidney Sheldon tells of a protagonist so blinded by ambition that he fails to see the nemesis who could ultimately wreck his plans. Saudi Oil Minister Abdulaziz bin Salman might want to read that book as he could be missing the nemesis before him now: U.S. President Donald Trump.

After various tete-a-tete meetings with trusted individuals and influencers in the Organization of Petroleum Exporting Countries, Abdulaziz appears ready to convince other members and allies of OPEC at a beginning on Thursday that the cartel should deepen existing production cuts. 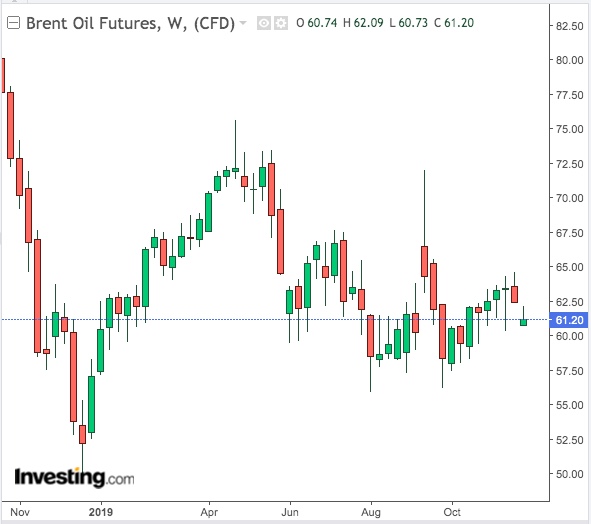 In December 2018, the enlarged OPEC+, which includes key ally Russia, reached a pact to reduce 1.2 million barrels per day from its output to boost oil prices, which hovered at 18-month lows of under $50 for a barrel of , the global crude benchmark. In July, with Brent averaging $65, OPEC+ agreed to extend that pact until March 2020.

As of last weekend, Brent was above $62 a barrel, well under its April high of $75 but still up 12% on the year. Until last Friday, what oil traders knew was that OPEC+ was to meet on Dec. 6, one day after OPEC’s members-only meeting, to discuss another 3-month extension to keep prices supported.

That was before the seismic shock delivered to the market on Monday by news reports that the Saudi-led OPEC leadership was mulling a 1.6-million-bpd cut instead—400,000 barrels more than the previous one.

Until last week, Abdulaziz was having trouble getting OPEC members to even honor the 2018 pact, with “serial offenders” like Iraq and Nigeria habitually breaching their production quotas.

That wasn’t his only headache. Russian Oil Minister Alexander Novak was even suggesting that OPEC+ wait until April—a month after the expiry of its current pact—to deliberate an extension. Novak seemed clearly against doing anything more than rolling the pact forward by another three months. But now Abdulaziz was lobbying to hike cuts by a third and his plan appeared to be supported by a good number within OPEC—including by the infamous quota-breaker Iraq.

At the time of writing, it was not known whether Russia will support the latest Saudi gambit on cuts. As we outlined yesterday, Moscow’s assistance has been integral to OPEC initiatives to lift oil prices since 2016.

But regardless of what Russia decides, one thing seems certain: Trump is unlikely to be happy with any additional OPEC cut—the same way he hasn’t been happy with any OPEC cut in the past.

And a Trump unhappy with OPEC could cause problems for the cartel, as it did before.

Saudis Want To Deliver A ‘Positive Surprise’ For Aramco

While Abdulaziz may have surprised the market with his latest move, there was no mystery on why he was doing it. According to Reuters, it was “to deliver a positive surprise” to Aramco, the Saudi state oil company whose IPO price is set to be announced on Thursday, the same day as the OPEC meeting.

While the Saudi objective was understandable, one should also not lose sight of what’s important to Trump.

Despite the U.S. president’s closeness with the Saudi royal family, he opposes OPEC’s market manipulation because higher oil prices could lead to higher gasoline prices in the United States, which could hurt the U.S. economy and possibly his reelection chances in 2020.

But Why Should Trump Even Care About Aramco?

“The Saudis want a great listing for Aramco. We get it. But do you seriously think Trump cares more about them than his reelection in 2020?”

As Reuters oil analyst John Kemp reasoned in a May blog, “the president calculates, correctly, that the marginal voter in his electoral coalition in 2016 and likely again in 2020 is a motorist in the Midwest rather than a driller in Texas.”

Kemp adds that Trump “risks losing more voters from a rise in (gas) prices than he does from a fall”.

It explains why Trump spent so much of his energy fighting OPEC in the run-up to the November 2018 midterm U.S. elections.

Last year, Trump used his charm offensive with Saudi royals first to get them to raise production ahead of the midterm elections, to enjoy some immediate relief from lower oil prices. Then he gave sanction waivers to importers of Iranian oil, flooding the market with supply. That move alone wiped 40% off oil prices over just two months.

It’s unlikely that Trump will be able to pull off such a stunt again with the cooperation of the Saudis. But if global oil supplies really tighten from additional OPEC cuts, the president could again signal that he’s ready to consider sanction waivers or even a diplomatic settlement with Iran despite the hostilities between the two sides this year.

As Kilduff puts it:

“Anything’s possible with Trump. You just have to imagine it and he’ll do it.”

… Or He Could Start Tweeting Again About Oil

One other thing Trump could do—and that he does exceedingly well—is to tweet negatively about high oil prices and the damage it is doing to the U.S. and global economies.

A typical tweet would ring like this: “Gas prices are up & they are doing little to help. This must be a two-way street. REDUCE PRICING NOW!”

There’s little doubt whom Trump refers to whenever he uses “they” in a sentence about high energy prices: OPEC.

While the long-term impact of such tweets on oil prices is hard to quantify, on some occasions, Brent and have fallen 2% or more in a day after a particularly damaging Trump tweet.

And the U.S. president may have his work in suppressing oil prices cut out now by the seemingly never-ending U.S.-China trade war, which continues to hang heavily over the global economy and energy market sentiment. A negative Trump tweet on China, in most cases now, is a negative tweet for oil.

There’s no saying when Trump will turn his full attention to fighting OPEC, though a safe bet might be when U.S. pump prices are closer to $3 per gallon. The national average for gasoline has stayed at or below $2.60 for months now, according to American Automobile Association—explaining why the oil market has also remained under the president’s radar for a while.

And Trump may not even have to do all the battle against oil himself, particularly if the rally in crude gets strong enough to stir another huge uptick in U.S. production that will ultimately push the market back down.

Shale, the bastion of U.S. crude output, might have slowed this year, but it continues to help the country churn out a world record of 12.9 million barrels per day.

As a Bloomberg story suggested on Monday, OPEC is making an audacious bet that 2020 will mark the end of the golden age of shale as U.S. drillers continue making cutbacks. Yet, the story also argues, non-OPEC production continues to flourish in Brazil and Norway, posing newer headaches for OPEC.

To sum up, Abdulaziz and OPEC have many adversaries, and Trump is one nemesis they shouldn’t ignore.

He dropped out of Harvard Business School ...