In Cocoa’s Rally, A Three-Way Fight Is Emerging

It’s the second best performing commodity of the year among U.S. “softs”, driven by Asian demand. And prices of New York-traded cocoa could go even higher if a cartel and farm lobby get their way — though demand destruction might also set in from consumers who balk at higher costs of their candy.

At Thursday’s settlement, on ICE (NYSE:) Futures U.S. was up almost 7% on the year — putting it only slightly behind , which had advanced by nearly 7.5%. The other two components of the softs complex, and , traded in negative territory. 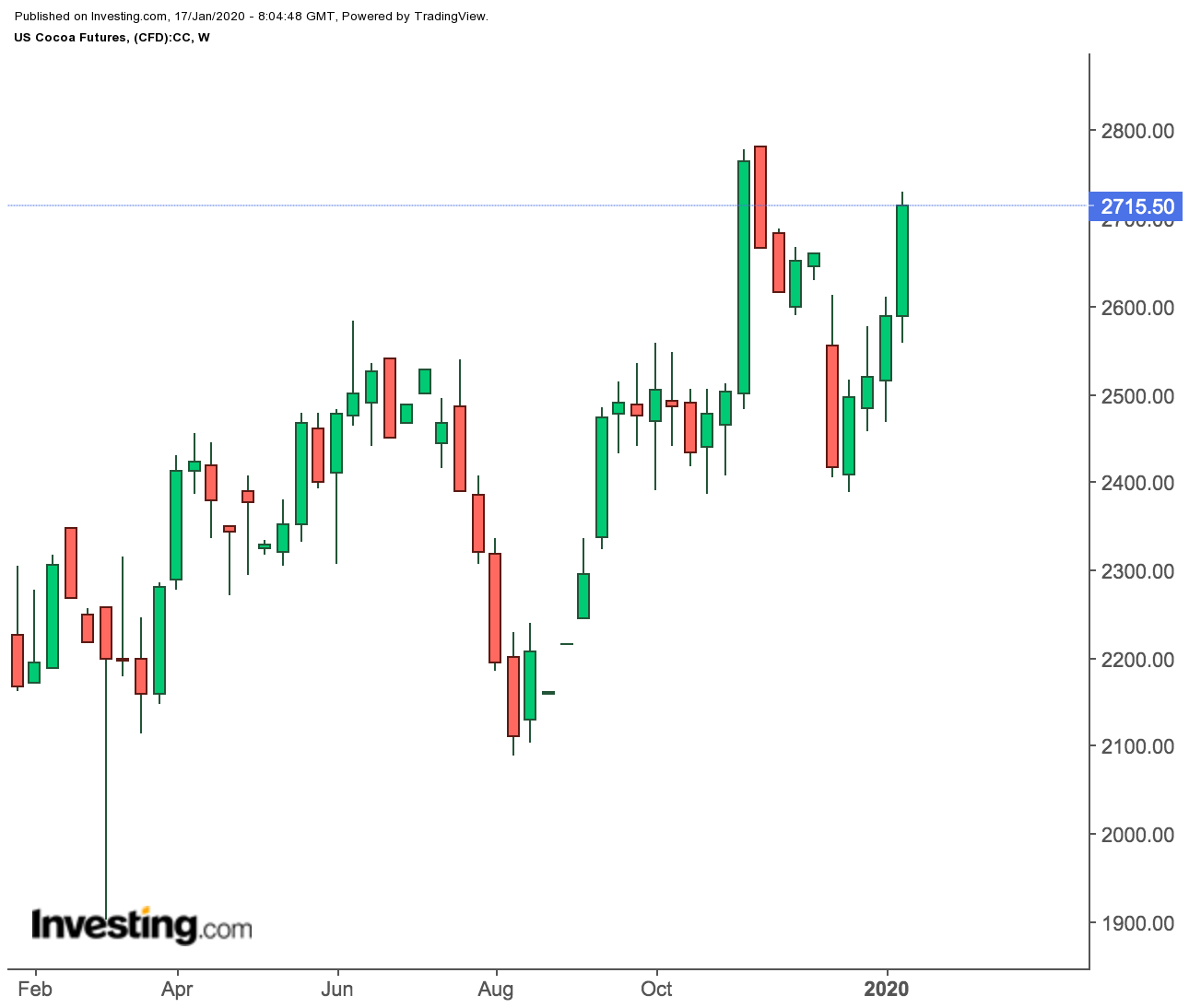 Bloomberg provided some answers for cocoa’s outperformance, citing Asian demand for chocolate, based on grinding numbers for the commodity in the region, that it said was growing faster than in both Europe and North America.

Bean grindings in Asia probably climbed 7.5% in the fourth quarter from a year earlier, rounding out an annual record, according to a Bloomberg survey of analysts, brokers and grinders. The surge in Asian grinds matches almost perfectly the cocoa rally in New York since the start of the year in percentage terms.

“The only real growth is coming out of Asia,” Jonathan Parkman, co-head of agriculture at London’s Marex Spectron Group, said, referring to cocoa consumption. “We are not seeing significant growth outside of that area.”

Cocoa processing in the West, meanwhile, has come under pressure as factory profits eased, bean prices rose and chocolate demand showed signs of weakness. In the three months through late December, U.S. retail sales of chocolate candy fell 2.8% in volume from a year earlier, according to Chicago-based market researcher IRI.

Will Confectioners Be Happy With Rising Cocoa Costs?

But will the strong Asian demand for chocolate hold if cocoa prices keep rising under cartel and farm lobbies? How much higher costs will confectioners be able to absorb before they pass it on to consumers?

These are valid questions amid the cocoa cartel formed by Ivory Coast and Ghana and farm lobby spearheaded by the Cocoa Barometer Consortium — both West African initiatives.

The Ivorian and Ghanian cocoa cartel is inspired by the OPEC model for oil led by the Organization of the Petroleum Exporting Countries.

The Wall Street Journal, which reported on this initiative early this month, says the cocoa cartel — dubbed COPEC by some — wants to charge an extra $400 for a metric ton of cocoa. That’s a 15% premium over prevailing New York cocoa prices.

The Cocoa Barometer Consortium is a West African industry initiative, separate to the cartel. It calls for every chocolate and cocoa company, and every sustainability standard, to develop and publish a living income policy, including a clear statement on what the minimum farmgate price should be.

And What About The Farmers?

“Currently almost no cocoa farmers in the main cocoa production countries in West Africa are earning a living income,” says the Cocoa Barometer in a position paper published by the Voice Network.

It adds that without a living income for cocoa farmers, cocoa will never be sustainable. If a farmer must choose between feeding his family and not cutting down his old growth trees, it isn’t a choice. Other challenges facing the sector – such as deforestation and child labour – will be impossible to tackle if farmers still live in poverty​.

”The paper cites Dutch chocolate brand Tony’s Chocolonely, which has aligned its price with Fairtrade and pays the same per metric ton. The main difference is that Tony’s calculates the Fairtrade premium as part of the Living Income Reference Price.

Moreover, premiums are part of a communal fund, are not fully paid to the farmer, and the paper says they should not be considered part of the farmgate price. Dutch retailer Albert Heijn is also purchasing according to the Tony’s Chocolonely model.

“It should be abundantly clear that living income is the starting point of a conversation on farmer income, not a finish line. Those people reading this paper would not be satisfied with earning just a living income. Why should a cocoa farmer? Every farmer should be able to earn at least a living income, but preferably a lot more​,” said Antonie C Fountain, one of the paper’s authors.

Paul Schoenmakers, head of impact at Tony’s Chocolonely, told Confectionery News, another trade publication: “To really change the system and make an impact, paying a higher price is not enough. ​You need all five sourcing principles: traceable beans, a higher price, strong farmers, long term commitments and investing in productivity & quality. No cherry-picking!​”

“Now that it appears the drama and fear caused by a flare-up of tension in the Middle East has settled down, cocoa prices are moving up,” Scoles said.

“With demand concerns and market anxiety mostly resolved, the bulls have become confident in cocoa again. Fundamentals are supportive.”

Yet, continued rise in prices could lead to demand destruction as well, as said earlier.

In the past, large multinational confectioners have seen cocoa prices well above $3,000 a metric ton and dealt with them by making candy bars smaller, adjusting the amount of cocoa used in their products and in many instances, by raising prices.

Of course, it’s not just candy bars that could get pricier. Ice cream — made from cocoa butter, the smooth velvety product that comes from the grinding of cocoa beans — and biscuits and other baked goods — produced from cocoa powder which also emerges from grinding — will get more expensive too.

To sum up, African farmers need better-than-living-incomes, confectioners have to keep their cocoa costs manageable and consumers must be happy with the quality and size of the chocolate they’re paying for.