If Wall Street Can Act Irrationally, So Can Gold

This CNBC story published on Monday had a great point: Wall Street has been spooked this year by a trade war, a potential recession and multiple geopolitical concerns, including Brexit. Yet, the stock market keeps hitting one record high after another.

With the joining Monday’s all-time peaks on the and , the “most hated bull market in history” observation — so often repeated on Wall Street in recent months—might become the worst market cliche of the year, CNBC added.

Now, apply the same situation to gold—since something similarly logic-defying is happening to the yellow metal.

When the stock market rallies, gold is usually expected to drop. One is a risk instrument and the other a safety hedge. 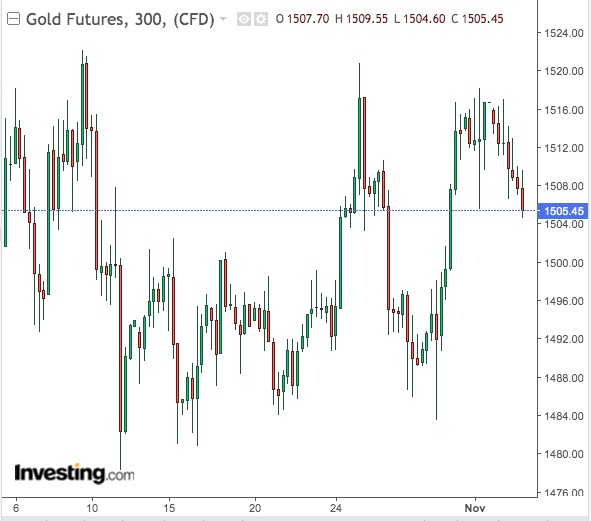 Yet, since Friday, both and have remained steadily above $1,500 an ounce, a level generally deemed as bullish. To be fair, the yellow metal has shed modest amounts of its value in recent days. But it hasn’t moved away from that key bullish perch, to the dismay of those who had shorted it, expecting a price crumble.

Just like the argument that there are many inherent weaknesses that make the current surge in equities untenable, there’s also the contention that gold doesn’t have what it takes to prevent a fall back to $1,400 or lower.

For these arguments to be acted on, it depends who’s hearing them. If they’re equity bulls, then what will matter are the broadly positive third-quarter corporate earnings, stellar growth for October and growing speculation that the Trump administration and China might reach a partial trade deal soon.

Similarly, for those pro-gold, the argument would be that until the threat of the trade war is fully or sufficiently defused, and permanent or acceptable solutions are found for Brexit and other geopolitical risks, investors will need the precious metal as a hedge. Also, the heady sentiment in stocks could reverse into a meltdown anytime these elements get out of hand.

All Will Sort Out Or Get Sorted Out

Parsing both sides of the debate proves one thing: both stocks and gold will sort out their anomalies eventually. Or will get themselves sorted out by market forces.

But, for the time being, if stocks can behave irrationally, so can gold.

TD Securities had a sound explanation in its Monday note on how the rallies in both markets were interconnected.

The Canadian bank-backed brokerage said while the Federal Reserve had indicated that it was done with rate cuts for 2019 after three back-to-back quarter-point , a clear and present danger of an economic slowdown could force the central bank into more easing next year. A Fed stay in rates has been touted as one of the main reasons why investors should get out of gold.

“For the moment, precious metals markets have also taken a liking to the apparent 2020 optionality, with data dependence and persistent inflation worries keeping the Fed’s potential path tilted towards easing.”

In such a scenario, the brokerage said, gold could still provide an effective hedge against further deterioration in growth, while further rate cuts potentially in the first half of 2020 would allow capital to embrace risk in the near-term in spite of global growth concerns.

TD Securities added that its theory suggested that a positioning-driven sell-off in gold, forecast by the naysayers, “could be more shallow than would otherwise be anticipated”.

Interdependency Between Stocks And Gold Rally

Fawad Razaqzada, technical analyst at forex.com, outlined a similar interdependency between gold and stocks, saying a hedge was needed against recent “weakness in data and not (so) brilliant corporate earnings”.

“It remains to be seen how much further trade-related optimism will support Wall Street, and risk assets in general, going forward.”

Joseph Young, a Hong Kong-based financial analyst, added in an article on Saturday:

“The upside momentum of gold during an extended stock market rally indicates that investors are not fully convinced fundamental issues, including geopolitical risks, are resolved.”

“The rising gold price suggests that while investors are moving towards riskier investments, they are not disregarding the possibility of a selloff in the markets. Analysts believe the gold bulls still have the upper hand in 2019.”

Ayanna Pressley, in break from the ‘Squad,’ ...