If ‘Phase One’ Of Trade Talks Is Really Coming, It Better Come Quick For Oil

For a third straight day, oil prices rose Tuesday. And for a third day in a row, some investors and traders were left wondering just what had changed so dramatically in the supply-demand of crude and related products to justify a near 6% gain since Thursday’s close. 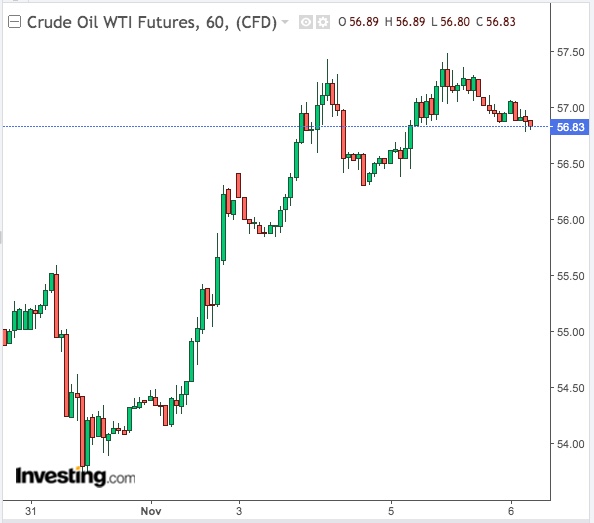 Of course, all market participants knew the key driver behind the price action, but the question that bugged the naysayers of the rally was: how long can the market be propped up on one utopian promise?

That promise is the so-called phase one of the U.S.-China trade deal that has saturated almost every market headline since Friday, driving not just the S&P 500 and NASDAQ indices to their customary record highs but also pushing the broader to all-time peaks—an achievement that previously occurred in July.

Concerted Effort To Push Market Up

There’s been no shortage of effort by officials in both countries in recent days to drive the media speculation for a deal.Since this week began, unidentified negotiators on both sides had leaked to the press plans to roll back more tariffs than traders had initially expected. Once reported, these instantly translated into record highs on the stock market, pushing oil prices up as well.Even gold, a hedge to equities, had rallied in recent days, caught up in the broader market’s crosscurrent.The way U.S. West Texas Intermediate and U.K. oil performed, particularly, gave the impression that the phase one agreement was all but signed, and about to deliver demand for millions of barrels of new crude and products to the market.Only, it was not—neither was the trade deal done, nor had the implied demand come through yet. But it was easy to see why oil bulls had been so excited by all these.

A Promising Start To 2019 That Fizzled

After a promising start to the year that took crude prices up nearly 50% at one point, oil has languished in frustrating range-bound trading.

Even the hype of September’s Saudi oil attack crisis fizzled within days.

This trade deal could be the all-important breakthrough for those long the market. At the least, it could help WTI round the year out at its current 25% premium to 2018.

There could be real demand gains for an oil market unshackled from the trade war.

Rystad Energy said the mere impact of the trade war was what forced it to cut its 2019 oil demand growth forecast to 1.2 million barrels per day from a previous outlook of 1.4 million bpd.

The International Energy Agency, which acts as a watchdog for Western energy consumers, cut its oil demand growth projection by 100,000 bpd for both 2019 and 2020, citing global macroeconomic concerns that included the U.S.-China trade dispute.

Producer group OPEC, meanwhile, said its output of crude and other energy liquids was expected to decline to 32.8 million bpd by 2024 from 35 million bpd in 2019. While OPEC’s announcement seemed more of a strategy for it to cover price-supportive output cuts, the cartel could also increase production if market conditions warranted it.

“It is worth considering at this point what might happen to the price of oil if the world’s two largest economies reach a long-term agreement. Over the last year, oil prices have been pushed down because of fears over the trade dispute, a global economic slowdown and decreased demand growth.”

“If those fears turn out to be unfounded, it could rock the market.”

A 6% gain in three days is indeed rocking, although the market began Wednesday’s trading in Asia lower after preliminary data on stockpiles for last week showed another jump.

Bottomline: ‘Phase One’ Has To Move From Talking To Signing

The point we need to make is that there’s only so much that oil can gain on the notion of a coming trade deal.

Unlike the stock market, where the combination of a few rallying counters can spark and sometimes sustain one record high after another, crude represents a physical commodity with specific supply and demand.

Without real market events that drain stockpiles or lead to game-changing supply shocks, talk is cheap in oil. And such empty talk will ultimately drive the market lower.

So, if a phase one is coming, it better come quick for the bulls.