It’s the question reverberating across the gold universe: With the yellow metal well past $1,700 an ounce, is $1,900 and a new record high happening this year?

Before we get to even that, there’s a more pressing question: How will gold react to the reopening of the U.S. economy from the lockdowns imposed over the coronavirus pandemic?

To me, this is even more important given President Donald Trump’s discernible impatience with the drag in stay-home and social distancing measures that have largely crippled the $21 trillion U.S. economy, putting him at odds with various state governors on the right time to bring Americans back to work.

Adding to the urgency of the question were remarks by Trump’s economic adviser on Tuesday that the president was expected to make “some very important” decisions in a day or two on this. 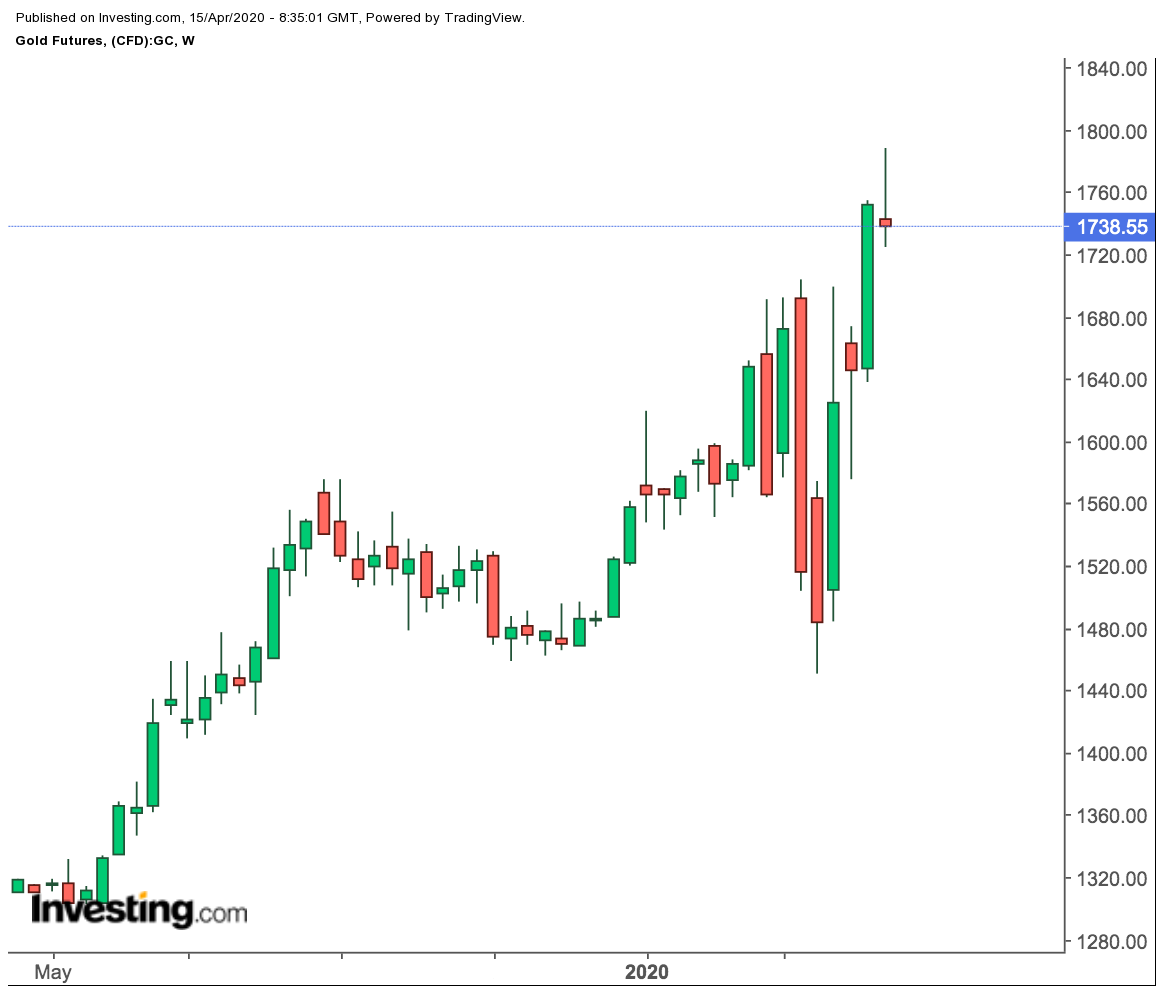 So, will gold’s “fear-charged” run — which has seen the safe-haven hit seven-year highs in five of the last eight sessions —  be reversed by a U.S. reopen from COVID-19?

Going by what an array of analysts and fund managers think, the yellow metal may not collapse from its recent trajectory, though immediate volatility in the $1,750-$1,800 range is highly possible.

“If the White House and states agree to a timeline on the reopening of the economy, you can see gold falling immediately into a sideways trading range of $50 as the market tries to figure out the next game plan,” said Eli Tesfaye, senior market strategist at RJO Futures in Chicago.

“This does not mean the gold rally is over by any measure. Any economic reopening agreed at this point is going to be conditional on what the medics say on a day-to-day basis. In the meanwhile, jobless claims or outright job losses are going to continue piling and any government assistance in the form of relief checks won’t be adequate. All these are bullish for gold as a safety hedge.”

Tariq Zahir, founder of Tyche Capital Advisors in New York, which trades gold as part of its macroeconomics program, agrees that the decision to reopen U.S. businesses will not deprive gold of its safe-haven catch.

Rather, the focus will be on the historic debt that the United States and most governments will be undertaking as they print and spend tens of trillions of dollars worldwide to rescue their economies, causing massive currency debasing and meteoric valuations in gold.

The U.S. budget deficit alone is expected to exceed $3.8 trillion this year due to the pandemic and its debt could be larger than the size of its economy, the Committee for a Responsible Federal Budget said in a report on Monday.

“I’ve no doubt that we’ll get to the high $1,800s on gold and my macro program is positioned for that,” Zahir said. “The logical course of action for gold is to maintain its trajectory toward $1,900 and aim for a new record. But whether it gets there right away will also depend on Wall Street’s trajectory, as the two asset classes have been joined at the hip this year.”

In Tuesday’s trade, COMEX gold for June delivery scaled $1,788.75 — the highest for a front-month gold futures contract since October 2012, when it reached 1,794.80. With Tuesday’s settlement, gold futures have gained as much as $165 an ounce, or 10%, since the end of March in a rally that’s seen few stops. 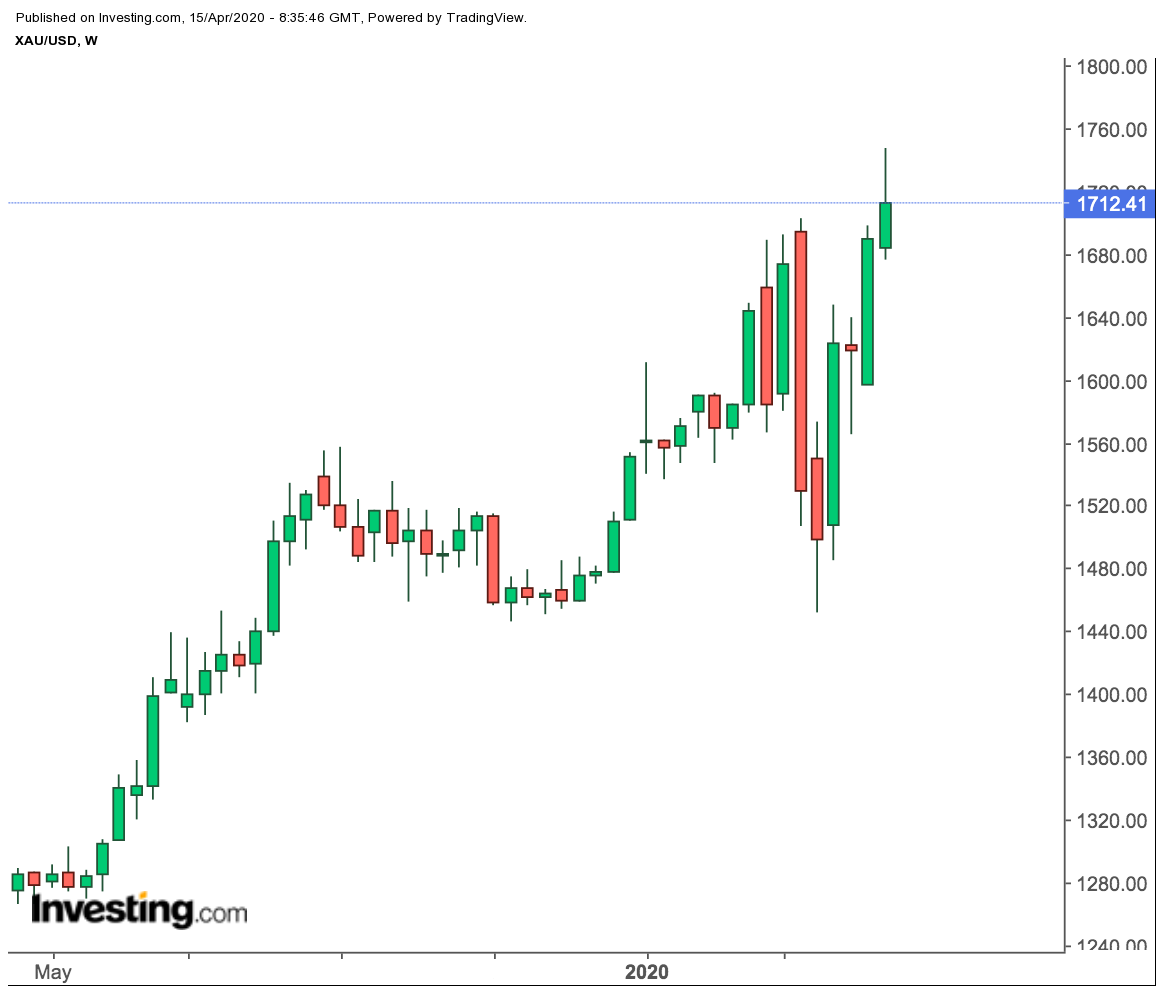 But spreads between futures and spot prices of gold remained wide on Tuesday, suggesting thinner liquidity, and exacerbating price dislocation. , which tracks live trades in bullion, peaked at $1,747.66 in Tuesday’s trade — about $50 off from the high on COMEX futures.

Since last month, the United States has announced a series of epic fiscal responses to the COVID-19, energizing gains in gold, which are up about 13% for 2020. The only other commodities with gains for the year are , rice and orange juice.

The U.S. Congress has passed a $2 trillion coronavirus stimulus. The Trump administration is trying to get a further $350 billion approved for small business relief and is mulling the sale of 30-year and 20-year COVID-19 bonds. The Federal Reserve, meanwhile, has other trillion-dollar market relief programs.

But it was the central bank’s announcement on Friday of $2.3 trillion in additional aid for corners of markets hardest hit by the pandemic that proved decisive for the gold rally. The Fed support came as U.S. surged for a third straight week, rising by 6.6 million to bring to about 18 million jobs lost in just three weeks.

“It was like a switch that suddenly flicked on the floodlights for gold, bringing its brilliance out in 1,000-watt fashion,” said Phillip Streible at Blueline Futures in Chicago. “Now, the supply of gold is being attacked from all angles as everyone is hunting for the physical metal as well to be hedged.”

If anything, it has removed market uncertainty from more than a week ago created by the surprise decision of Russia’s central bank, the top bullion buyer, to stop accumulating gold bars. Some analysts had predicted then that gold might slip to $1,400 levels or below.

“I think $1,400 is too cheap,” said Tesfaye of RJO Futures.  “$1,700 is the new norm. The market has been tested, truly. So, it’s going to sit tight here because it’s a very precarious situation for the economy going forth.”

The Fed’s market programs “could see long-end rates rise during the recovery phase, but not without rising inflation expectations, which should keep real rates suppressed,” TD Securities said in a note. “In this context, we suspect that investment demand for gold will continue to rise as capital seeks shelter from a long-term environment in which real rates are negative.”

The economic data is even worse than ...