If China’s Love Won’t Do It For Soy And Corn, What Will?

It was just what grains markets seemed to have waited for months: China, China, and more China.

And when people familiar with China’s grains demand indicated on Wednesday—albeit through Bloomberg—that Beijing will import at least $20 billion of U.S. agricultural products a year if the two countries sign that partial trade deal suggested earlier this month, how did the soybeans and corn markets react?

prices edged deeper into the red in Chicago trading on Wednesday, while those of managed to finish just in the positive. By the next session, both were lower.

In market analogy, that reaction was equivalent to OPEC bigwigs whispering to the media that they’ll cut output by another million barrels per day, only to see prices fall again.

With the soy and corn story though, more surprising was that there was affirmation to some extent on Thursday that the signals to Bloomberg by Chinese agricultural sources probably contained more than a grain of truth.

That validation came from none other than the U.S. Agriculture Department. The USDA released data showing that private exporters sold 264,000 tonnes of U.S. soybeans to China for delivery in the 2019/20 marketing year, amid hopes for the partial trade deal between the two sides.

Reuters reported that it was the first U.S. government confirmation of a soybean sale to China since President Donald Trump said on Oct. 11 that Beijing would buy up to $50 billion in American farm products as part of a trade agreement.

Analysts’ forecasts for the weekly report had ranged from 800,000 tonnes to 1.6 million tonnes.

Lack Of Ags Market Moves Looks Jarring To Some

The Hueber Report in St Charles, Illinois, which covers the daily moves in ags commodities, could not hide its disbelief at the lackluster performance of the soy and corn markets over the past two days despite the talk and data over higher Chinese demand.

Hueber Report analyst Kelley Herwig remarked that Thursday was “a rather uneventful day in grains”.

“Overnight, China said they had agreed to purchase $20 billion worth of U.S, ags products as part of the first phase of the trade deal expected to be signed in the next few weeks.

China started to follow through with that statement this morning, with a spot export sale of 264,000 metric tonnes of soybeans for delivery in the current 2019/20 marketing year.” 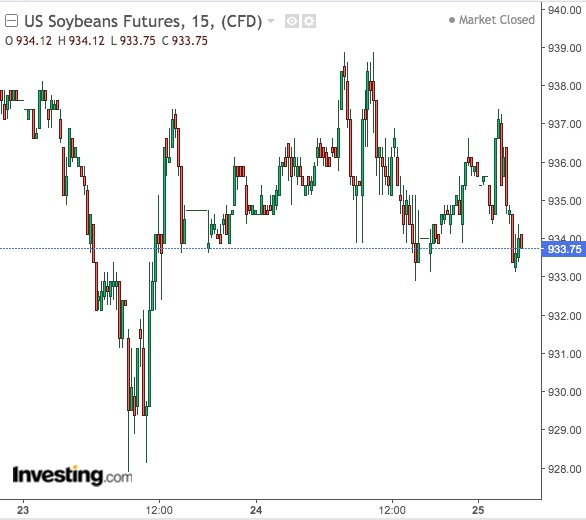 Yet, soybean prices were unable to hold their strength into Thursday’s close, with the benchmark January contract closing a half cent down at $9.47 per bushel, she noted.

“The soybean market has turned sideways, and it wouldn’t be surprising to see a pullback to the 927’0 area.” 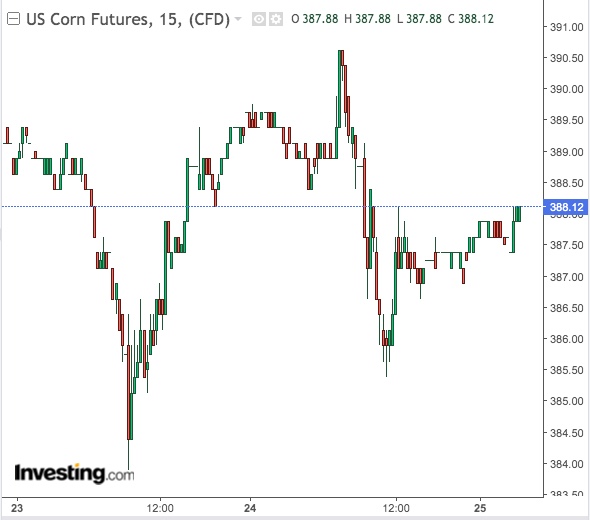 Likewise, corn started Thursday higher on the USDA report on China before slipping by the close, Herwig said.

“Like soybeans, corn has traded sideways over the past several days and it wouldn’t be surprising to see a pull back in this market either. Support is near $3.8025 and $3.73”

If not for the partial trade deal being pursued by the two sides, China might have little reason to buy more U.S. corn and soy now as animal feed, given the wholesale damage to its hog population caused by the African swine fever.

From No Let Up In Trade War, The Two Sides Are Now Talking Again

Just before October, there seemed to be no let up in the tariffs battle between the two world powers, with the Trump administration applying duties on $550 billion of Chinese goods. The Xi Jinping administration, on its part, had tariffs on $185 billion of U.S. products.

Beijing had also imposed hefty duties on imports of U.S. pork as part of the trade war.

Despite the damage to its hog population, China’s total purchases of U.S. pork last week stood at 2,002 tonnes—the smallest in five weeks. That was down from record-large weekly purchases of 152,599 tonnes reported in the week ended on Oct. 10, although USDA said sales from previous weeks may have been included.

Jack Scoville, who writes the daily ags report for the Price Futures Group in Chicago, said the cautious moves in soy and corn over the past two days could just be a a “wait-and-see” attitude by ags traders.

“The problem is that the issues to be resolved are big and very complicated and will require a lot of time and work before success can be claimed by both sides.”

But Scoville also notes that China has removed tariffs on up to 3 million tonnes of U.S. soybean imports by private industry as a show of good will towards the talks.

“The good thing is, the two sides are talking again.”