Since ancient Greek mythology and Old World pagan beliefs evolved into the modern-day personification of the northern hemisphere’s cold season, “Old Man Winter” has become a necessary evil in our lives. The trouble is he hasn’t been a forceful enough evil for natural gas bulls this winter.

As those long Henry Hub gas futures on the New York Mercantile Exchange, or the (NYSE:) ETN, hunker down to wait for the U.S. government’s weekly data on due at 10:30 AM ET (15:30 GMT) today, the ominous feeling is that the numbers aren’t going to be good.

Analysts’ projections are that the Energy Information Administration (EIA) will report a drawdown of 53 billion cubic feet (bcf) from storage by utilities in the first week of 2020 to warm up the United States as the northern hemisphere winter begins earnestly.

For perspective, that 53-bcf draw for the week ended Jan. 3 compares with a reduction of around 91 bcf during the same week a year ago, and a five-year (2015-2019) average withdrawal of about 169 bcf for the period.

That comes after the EIA’s reporting of a 58-bcf draw for the previous week to Dec. 27 — which again was markedly lower when compared to the earlier week’s 161 bcf decline and five-year average of 89 bcf.

The volume of gas pulled from underground for heating has been mostly underwhelming in the 2019/20 cold season, which kicked off with the fall period that began Sept. 23, and continued with the official onset of winter on Dec. 21.

For last week, there were just 145 heating degree days (HDDs) versus a 30-year average of 200 HDDs for the period, temperature readings showed. HDDs measure the number of degrees a day’s average temperature is below 65 Fahrenheit (18 Celsius), and are used to estimate demand to heat homes and businesses.

Adding to the woes of gas bulls has been the unyielding highs in gas production, which again hit an estimated record of 95.4 bcf per day (bcfd) last week.

All that resulted in a price of $2.141 per million metric British thermal units at Wednesday’s settlement. Prior to settlement, the contract hit a five-month low of $2.084. Gas for February delivery is also down by a net 1% since the start of 2020, after losses of 13.4% in November and 4% in December on the front-month contracts then. 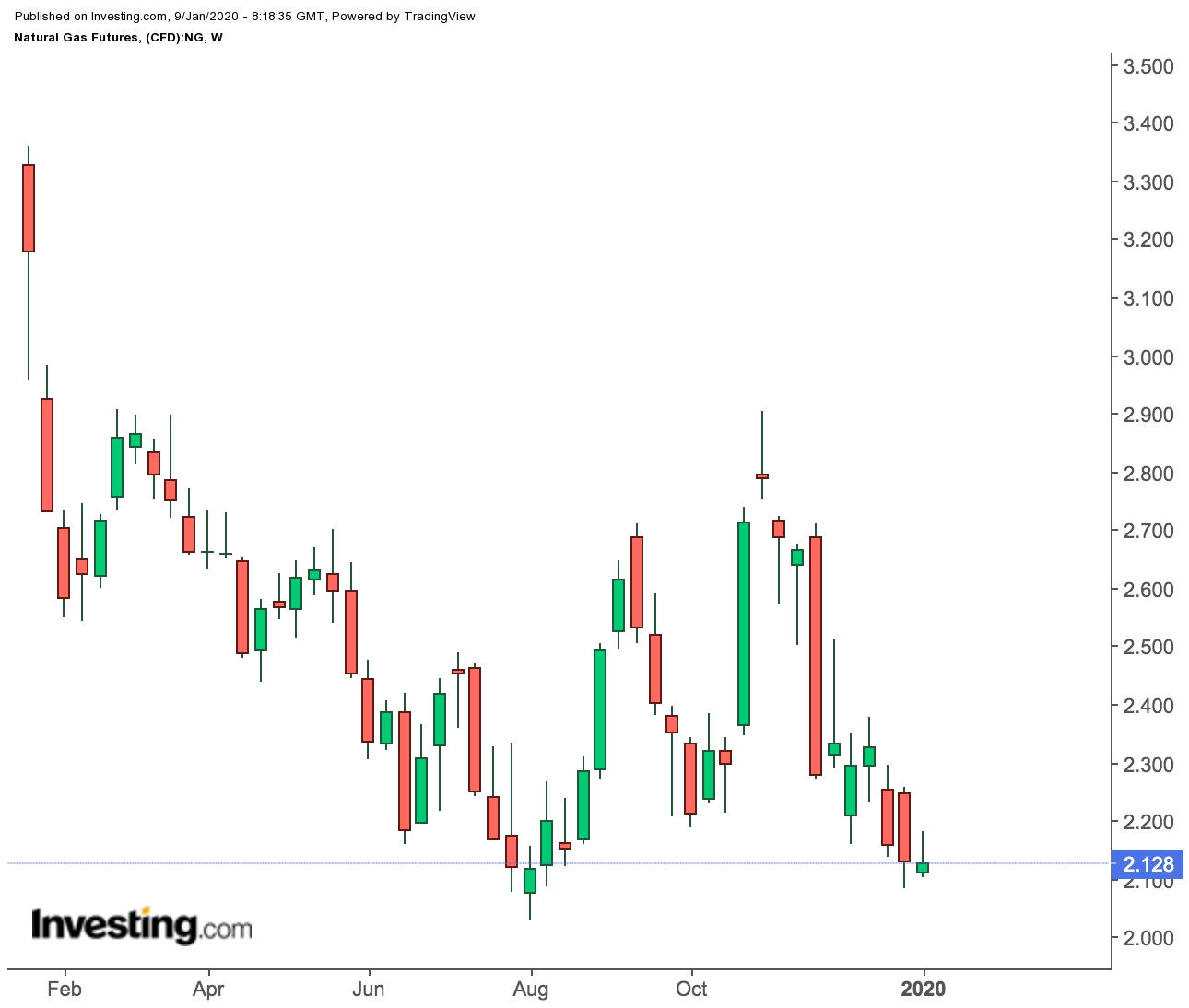 There has been speculation that this winter could turn out to be as bad for gas bulls as the 2011/12 season — which was the warmest for last decade, with only nine of the 48 contiguous U.S. states experiencing “near-normal cold” between end-December and the onset of spring at end-March. If something like that recurs, the bet is that Henry Hub’s front-month will break its $2 support. That doesn’t look likely to happen now, but it could.

“Granted, we could have a cold February or March, but still, we’re going into the heart of winter, and we don’t have enough demand or enough cold forecasted to make a difference,” Elaine Levin, president of Powerhouse, a Washington-based gas fund, was quoted as saying by naturalgasintel.com.

“The cure for low prices should be low prices, but I think we could be staying low for a while.”

Scott Shelton, energy futures broker at ICAP in Durham, North Carolina, is another who thinks the market has more to lose. But he reckons that funds in the game — generically known as Commodity Trading Advisors, or CTAs — were also playing the long waiting game with Old Man Winter.

“I wonder if we have run out of selling, to be honest, from the CTA side,” Shelton wrote in a commentary earlier this week, shared with Investing.com. “I would think that should temperatures globally continue to remain warm, there should be another leg lower in the market.”

Dan Myers of Houston-based gas risk consultancy Gelber & Associates held a similar view, saying the cumulative gain of 1.8% in the three sessions to Tuesday was a “false start”, with the market returning to the red on Wednesday. Said Myers:

It Could Get Colder, Though Not Where It Matters Most

So, could it get colder in the near future?

Yes, depending where you are, says Dominick Chirichella of the Energy Management Institute in New York.

Chirichella said unseasonable warmth will remain a key feature across the Eastern United States — the country’s largest gas-driven heating market — in the next nine to 10 days.

“But a big push of colder air will also set up shop across the North Central U.S. and there will be a sharp dividing line between the two air masses,” Chirichella said.

“Below normal temperatures will also be likely across the Northeast, especially New England. The dividing line will be somewhere from Texas to New England and changes are certainly possible closer to that line.”