To those looking for the next breakout in gold, watch for this number: 1968.

Technical charts show that , which reflects trading in bullion, needs to get to that level in order to recover at least some of August’s frenetic momentum that took it to record highs above $2,000 per ounce.

Make no mistakes: $1,968 is only the beginning. There are multiple pressure points for gold bugs to cross if they wish bullion to journey back to and beyond its Aug. 7 record high of $2,073.41.

And at each level, gold bears will await—and most likely so will a vicious , as the nemesis to the yellow metal often defies the odds these days in staying strong against the and other major rivals.

“After $1,968, spot gold’s test will be $1,993,” said Sunil Kumar Dixit, independent technical analyst and chartist for precious metals. “Whether it crosses $1,993 itself is a cryptic clue.” 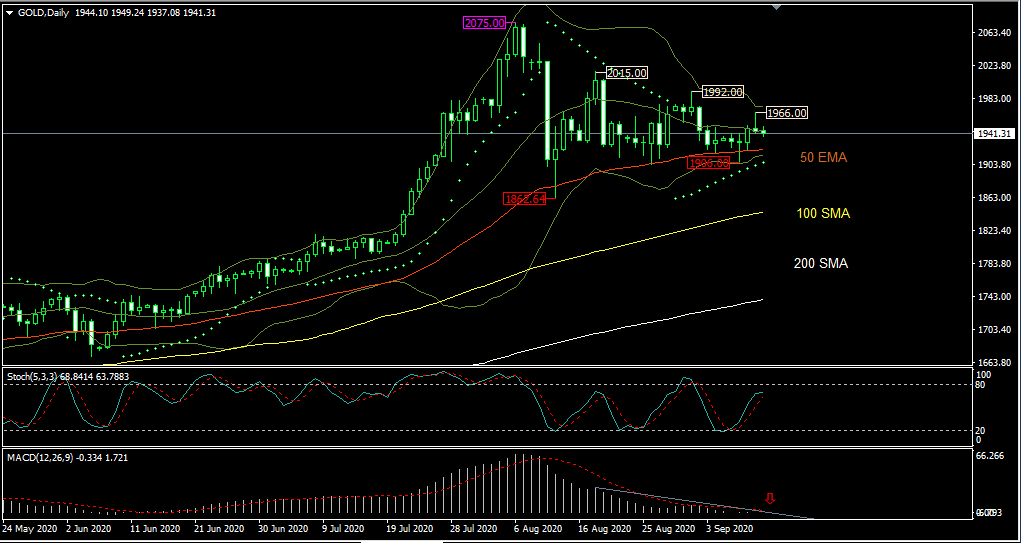 In the era of the coronavirus and pandemic-related stimulus, “animal spirits” have often shaped the highs and lows in volatility-stricken financial markets. Yet, when fundamentals on their own do not produce a strong conviction, it’s back to the charts and technicals.

Another Selloff Possible In Gold

By Friday afternoon in Asia, spot gold touched an intraday low of $1,937.41 that left it at least $30 behind the nearest resistance awaiting it. Dixit pointed out:

“The market’s reaction to $1,968 will give guidance on the further course of action. But gold actually needs to close above $1,973 and cross above $1,993 to resume the bullish momentum.” 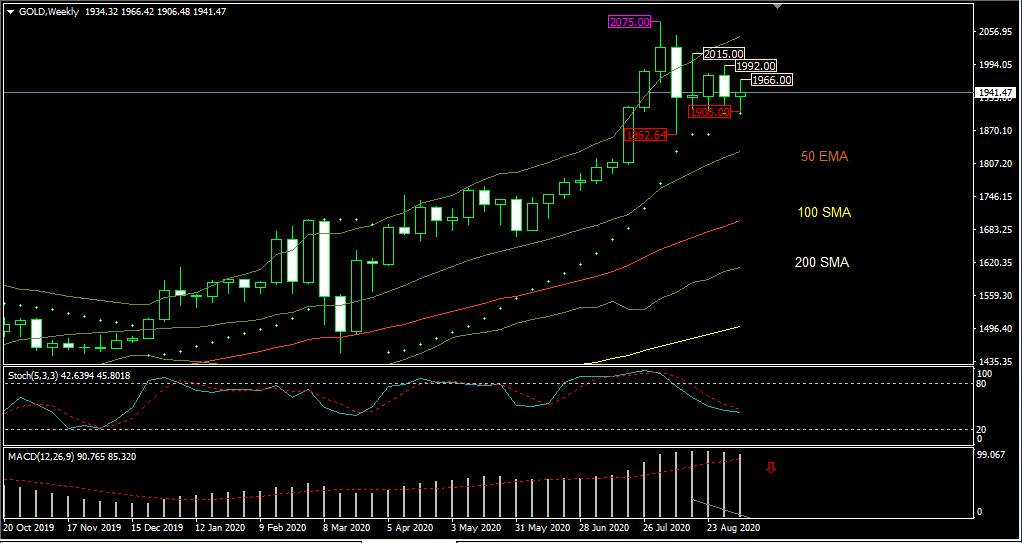 Michael Boutros shared a similar view to Dixit’s in a blog posted on DailyFX.

“A closer look at (spot) gold’s price action sees … initial resistance … at 1967/74 and 1994, both areas of interest for possible topside exhaustion if reached,” Boutrous said. ”Ultimately a break below the 2011 high-day close at 1876 is needed to suggest a larger correction is underway.”

Bottom-line, Boutrous said, gold was approaching the upper bounds of the race and consolidation range and bulls were looking for a reaction just higher. From a trading standpoint:

“If prices are indeed heading lower, a close below 1920 will be needed to shift the focus back to the downside.”

Dhwani Mehta, another gold chartist, said in a post on FXStreet that spot gold’s relative difficulty in getting past the critical 21-day Simple Moving Average at $1947 leaves it in a range within a symmetrical triangle.

The result was a more compelling downside than before and action that suggests that the recent buying momentum has faded. Mehta added:

“Meanwhile, the daily Relative Strength Index (RSI) trades flat at the midline, indicating a lack of clear directional bias. A test of the 50-Day Moving Average at $1920 cannot be ruled out in the day ahead.”

“A fall in equity markets on Wall Street later on Friday would likely see gold retest the $1900 to $1920 support zone,” Halley said.

“It is unlikely to break, as there appears to be plenty of willing buyers waiting patiently for dips in prices.”

Thursday’s rise in gold futures came on the back of a volatile dollar, which initially tumbled against the euro after comments by European Central Bank (ECB) President Christine Lagarde that were deemed as hawkish for the single currency.

The ECB did not discuss an expansion of the 1.35 trillion-euro pandemic purchase program and wasn’t eyeing a specific level for the euro as markets had thought. Lagarde’s comments added to a mostly constructive ECB policy that came with an upward 2020 GDP revision and an easing of deflationary concerns.

The ECB action drove the euro up and the Dollar Index down below the key 93-handle, before the greenback clawed back early losses to return to the positive late afternoon in New York.

The Dollar Index, which has stubbornly held to its bullish 93-handle despite a new Federal Reserve initiative for inflation, could cause more problems for gold.

The Fed meets next week for its monthly and dovish comments by the central bank could drive the Dollar Index lower and gold higher. Notwithstanding that, some are actually expecting the greenback to forge new highs.

“We expect that (a) broad 1-2 month USD rally will begin this week,”  Bank of America said in a note Thursday. BofA adds:

“Looking forward, we expect USD to rally into the US election on a rebuilding of FX risk premium amid elevated downside market risk, one-way positioning, improved relative US data outlook and bullish seasonals. The ECB this week could be a catalyst.”

The ECB will be having a second round of on Friday that could strengthen the euro. Alternatively, the August reading for the U.S. could boost the dollar if the data came in above the 0.3% forecast for the month.

Outside counsel appointed by judge in Flynn ...

Trump gets a second nomination for Nobel ...