Gold: Will Redditers Show This Commodity Some Love Too?

Will the Redditers on WallStreetBets move on to next?

As the world watches with mouths agape as once-meek retail investors play whack-a-mole with powerful stock-shorting hedge funds, I wonder if the democratization of investing would (and should) extend to the commodity markets too. 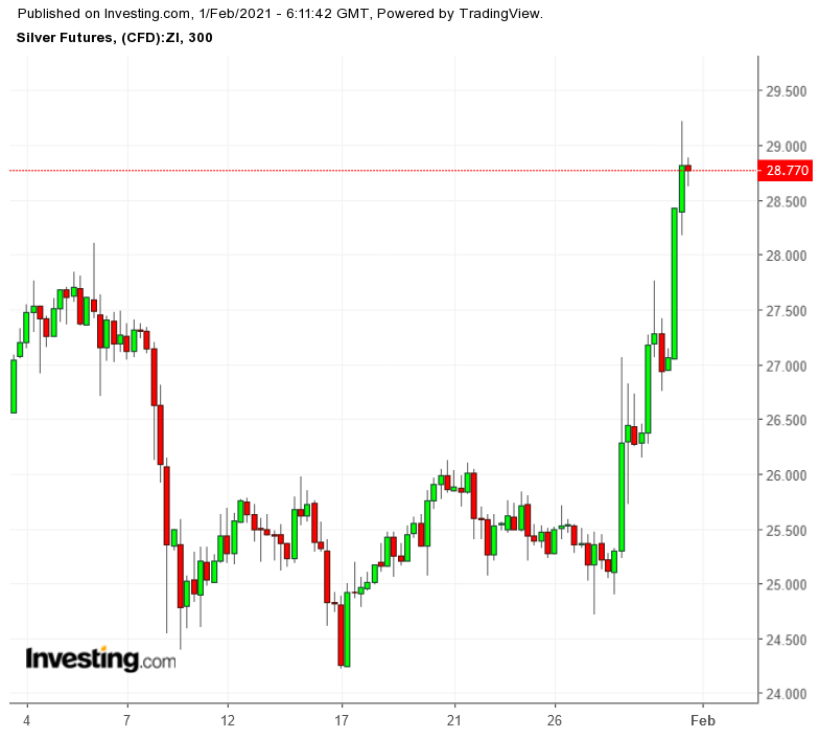 In fact, , the so-called poorer cousin of gold, has already gained almost $3 an ounce, or 12%, since Thursday’s close of nearly $25.40 on New York’s Comex, on talk of Redditers going long on a metal said to be shorted below fair value by commodity funds.

I’m of the opinion that gold—like silver—has barely justified its trade levels over the past six months since being forced off August’s record highs of above $2,000 an ounce.

I have equally strong views against the dollar and U.S. bonds yields being held on a higher ground than gold, and we’ll come to that in a moment.

As the disclaimer on my columns read, I do not invest in the commodities or securities I write about, so I have a zero sum gain in advocating for higher gold prices.

My currency is invested instead in logic, common sense and fundamentals.

That last one is critically important because much of the mocking of the buy-till-we-die mania of penny stocks by the Reddit community now has been put down to a poor understanding of share valuations.

Citron Research, one of Wall Street’s most famous short sellers and now one of those forced to buy back at astronomical prices the same GameStop (NYSE:) shares it was trying to drive down, bemoans that it’s lost upon the Reddit community that the stock the hedge fund was targeting belonged to a “failing mall-based retailer.”

Citron’s Chief Investment Officer Andrew Left, a storied short-seller forced to eat humble pie over the Reddit sting—so much so that he will only advise on stocks worth going long on from here—tries explaining in a Youtube video the irrationality of the fate that befell his fund:

“The amount of people who are so passionate about putting GameStop higher (is) not based on any fundamentals—it just shows the natural state of the market right now.”

Let’s stop right there and apply that same logic to the dollar and bond yields via the standing of the U.S. fiscal deficit, debt and money supply.

At a 1.1% yield on the 10-year note, the annual servicing payment would amount to roughly $370 billion. Right now, U.S. national debt is approaching $28 trillion, and total debt-to-GDP sits at a stunning 146%.

The U.S. federal budget deficit itself is already at $4.5 trillion or so, after adding the Trump administration’s $3 trillion plus COVID-19 stimulus for last year.

If the 10-year note’s yield rate stands at 2%, coupled with a $30 trillion national debt, annual servicing payments alone would amount to $660 billion roughly.

Annual deficits will continue to make the national debt stack ever higher.

And while the United States appears to be in the relatively early stages of a monetary expansion cycle, money supply could still increase substantially and set the country up for a return to the 2008/2009 financial crisis days.

With the dilution of the fiat monetary system, higher inflation is most certainly on the way. Historically, gold prices have a very strong correlation on a long-term basis with monetary base expansion. 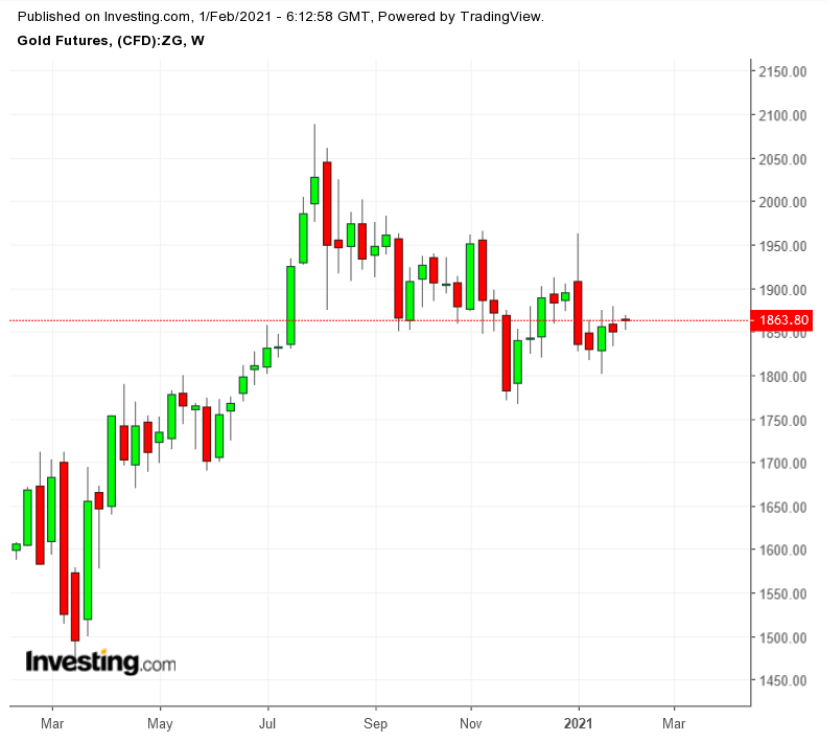 So, on fundamentals alone, what’s the justification for placing the dollar and yields on a pedestal, while trodding upon gold? Don’t give me the technical charts argument, which to me is secondary to fundamentals.

Also, let’s stop regurgitating the fertilizer about the Fed “taper.” Federal Reserve Chair Jay Powell has done everything in his power—short of climbing the Everest, diving to the depths of the Atlantic and slaying dragons—to make it clear that the central bank isn’t going to taper stimulus efforts or raise interest rates anytime soon to give dollar bulls the benefit of doubt in the so-called taper game.

In fact, if there’s any benefit of doubt to be given, it should be for the hurdles of bipartisanship sought by President Joe Biden for his $1.9 trillion COVID-19 stimulus. Yet, with work-arounds like “reconciliation” available to Senate Democrats, the stimulus is likely to pass; maybe in a couple or more installments, but it SHOULD pass. And the $1.9 trillion won’t be the only fiscal relief he’s only looking at, Biden has promised.

Of course, the commodity funds and the banks involved in the bullion trade know all this.

Yet, gold prices remain depressed, even manipulated, should I say, to benefit the shorting funds and bullion-banks. Low gold prices also help central banks hoard the metal cheaply for reserve-building. I know I’m not alone in feeling this, based on the comments I get on my gold analyses, and the feedback on Investing.com’s gold forum each time the metal’s prices nears new lows for the year.

But my hopes for a Reddit shakeup of gold will probably not go far because of the entry level that determines these things. One reason the rally in penny stocks championed by retail investors over the past two weeks was so successful was because these assets were cheap to get into. GameStop was under $18 a share before its buying frenzy began. Gold is currently trading at well above $1,800 an ounce. It’s quite clear that we are comparing apples to oranges here.

Also, let’s be clear that I’m not advocating for lawless intervention in the markets, which would then defeat the very purpose of my post—that everyone plays on a field that’s level. The jury is still out on whether the WallStreetBets action on GameStop is tantamount to collusion, which would then be “unlawful.”

But while the lawyers who charge hundreds of dollars or more an hour chew over the legalese of this, let’s not forget how we got here in the first place: the hedge funds that shorted GameStop borrowed 140% of all the available shares in the company—more than what was LEGALLY available—to apparently reach their so-called “fair value” for the stock. There’s another word for this: greed. It accompanies two other interchangeable words: Arrogance and Stupidity. That’s what these hedge funds are paying for.

All said and done, it’s empowering—and fun—to break down the walls that protect the elite—especially the undeserving elite, who wouldn’t be where they are if the rules that applied to others applied to them too. It’s also heartwarming to read that a 10-year-old boy whose mother innocently bought him 10 GameStop shares at just over $6 each two years ago is at least $3,200 richer now.

Let me know your thoughts on gold.