Gold: What Are The Scenarios With 2 Weeks To U.S. Election?

With two weeks to the U.S. presidential election, some traders may have chosen wisely not to bet big— and some, not to bet at all. Both stances are understandable given the uncertainty of the outcome, notwithstanding whatever the polls are saying.

But what if you’re a gold trader who intends to hold the position in hand or even double down on it? What are the likely scenarios that await you?

There are positive and negative conclusions out there, and these are independent of the election result.

But a good part of these logical deductions—comprising both fundamental drivers and technicals—may have to do with one thing: the U.S. coronavirus stimulus and whether an agreement of any sort will be reached later today between Treasury Secretary Steven Mnuchin and House of Representatives Speaker Nancy Pelosi.

Whilst no one expects paycheck protection to reach the American people before the Nov. 3 election, an agreement to put the process in play after the vote could be an instant market booster for gold.

settled Monday’s official trading session up $5.30, or 0.3%, at $1,911.70 an ounce, just before news broke that sufficient gap remained between Pelosi and Mnuchin for a deal. The two are to speak again today.

Gold Beholden To Stimulus News; Few Have Faith In A Deal Though

“Financial markets are very much locked into tail-chasing mode as the noise from the U.S. elections, fiscal stimulus and COVID-19 provide so much noise, they drown out the lyrics.”

“Gold continues to range-trade each side of $1,900 an ounce in subdued range trading. It is clear that gold is moving to nuances in other markets, and not on gold fundamentals alone. However, the ever-compressing ranges continue to form a triangle formation that suggests a massive breakout is coming, with a potential to move over $100 an ounce.”

“A daily close above or below those levels signalling a breakout is finally commencing. In all likelihood though, the driver will come from elsewhere, and hence, waiting to see which way the tree falls is probably the wisest strategy for now.” 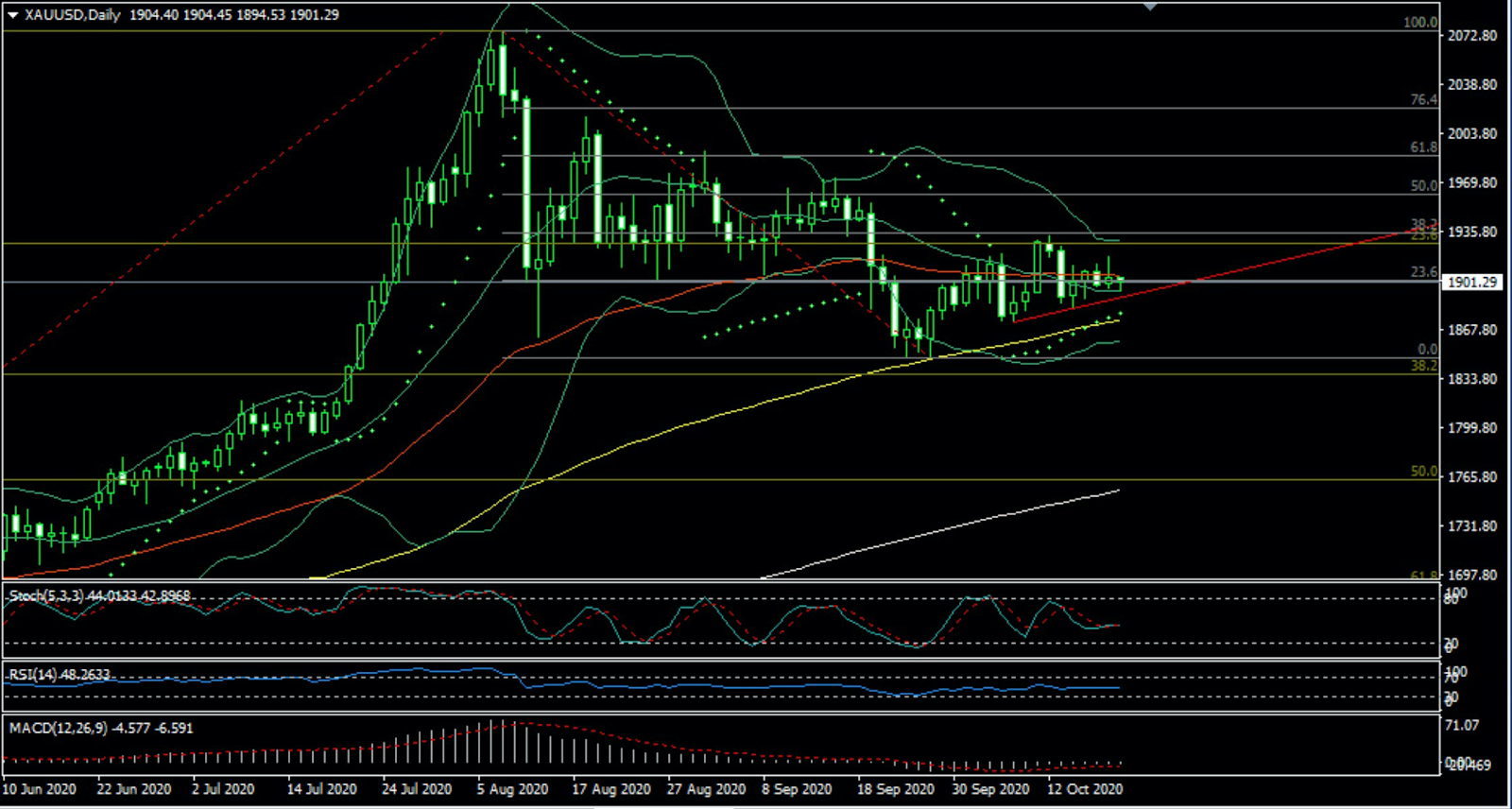 Independent gold chartist Sunil Kumar Dixit has significant moves both ways in his view, though he believes the upside will be greater if Pelosi and Mnuchin were to announce an agreement in principle.

In an email to Investing.com, Dixit said of spot gold:

“Technical set up has some contradictions which translates to traders remaining cautious on the fate of stimulus. Daily Stochastics and RSI (Relative Strength Indicator) indicate sideways to up bias as long as $1900 handle holds with rally possible for 1920-1927-1935 for Spot Gold while weakness likely below 1898 for retest of 1873 the 100 Day SMA.” 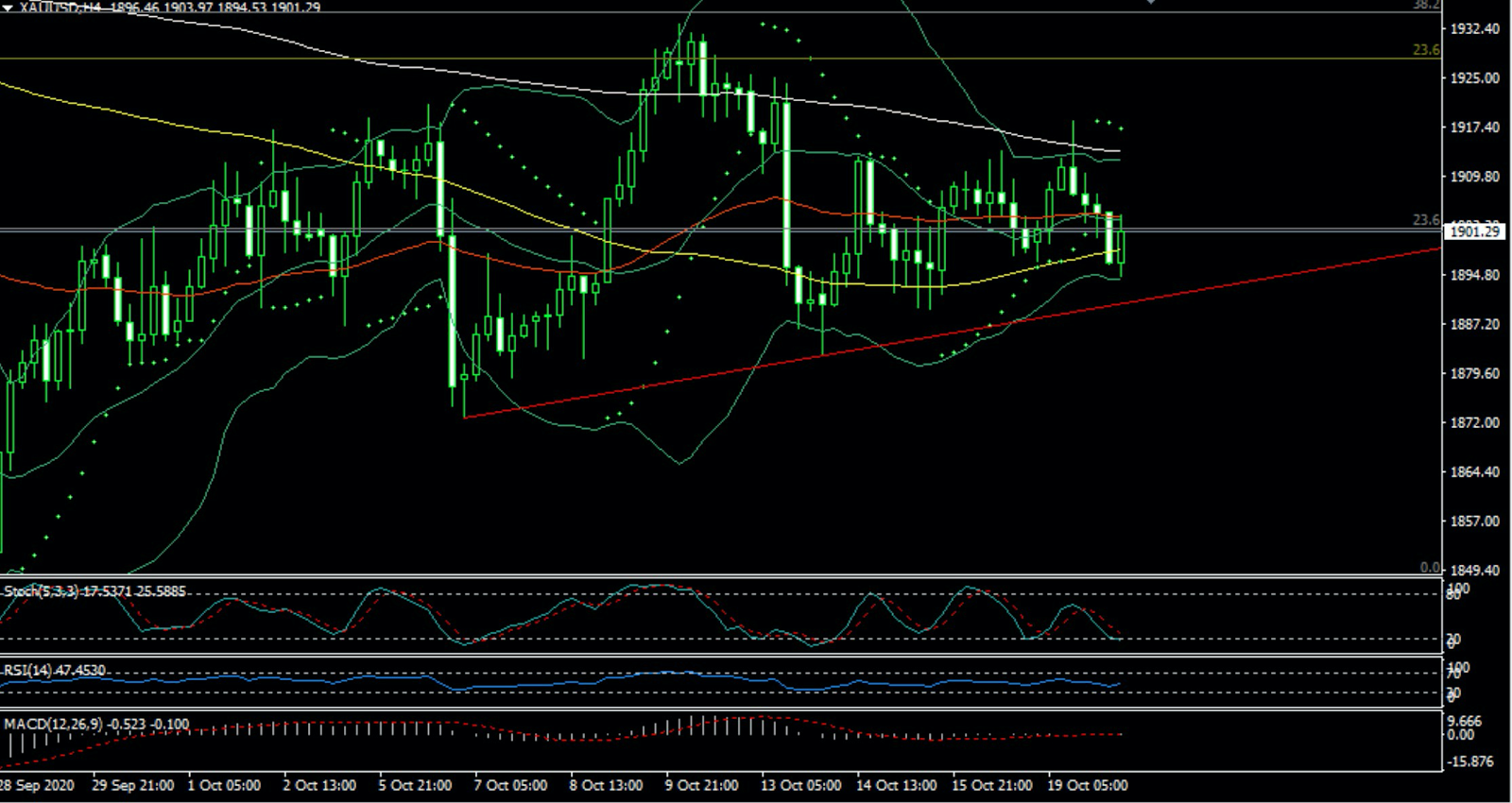 “Range-break on either side should open a move for some 90 dollars.”

Anil Panchal said he expected gold to stay sluggish around $1,901 while heading into Tuesday’s European session, and, in doing so, the yellow metal would respect the pullback from a short-term support line while staying below short-term resistances—namely the 200-bar Simple Moving Average and a falling trend line from Sept. 16.

In a blog posted on FXStreet, Panchal wrote of spot gold:

“With the MACD (Moving Average Convergence Divergence) suggesting no clear direction, traders will prefer waiting for a clear break of either $1,918, comprising the resistance line, or a downside break of the support line figures near $1,894.”

“Additionally, the bullion’s run-up past-$1,918 will challenge the monthly high of $1,933 ahead of probing the mid-September peak surrounding $1,973.”

Investing.com itself has a “Strong Sell” on spot gold’s 5-, 10- and 15-minute, and the one- and 5-hourly charts. The only “Buy” signals are on the weekly and monthly charts.

However you proceed, use caution and remember: the trend is your friend.