Gold: The Stimulus Means More Than COVID In The White House

President Donald Trump says he’s quarantining with First Lady Melania after both tested positive for the COVID-19. Yet, gold, the perceived safe haven, especially for moments like this, couldn’t immediately catch a bid. Why?

A day after returning to the $1,900-an-ounce level that’s critical to the psyche of gold bulls, and initially struggled on Friday, surrendering most of gains made in the previous 24 hours.

While gold did turn positive later, it’s interesting that the initial losses, which began soon after the window for Asian trading opened on Friday, deepened as Trump tweeted—first about his infected aide Hope Hicks—then about the First Lady and himself. 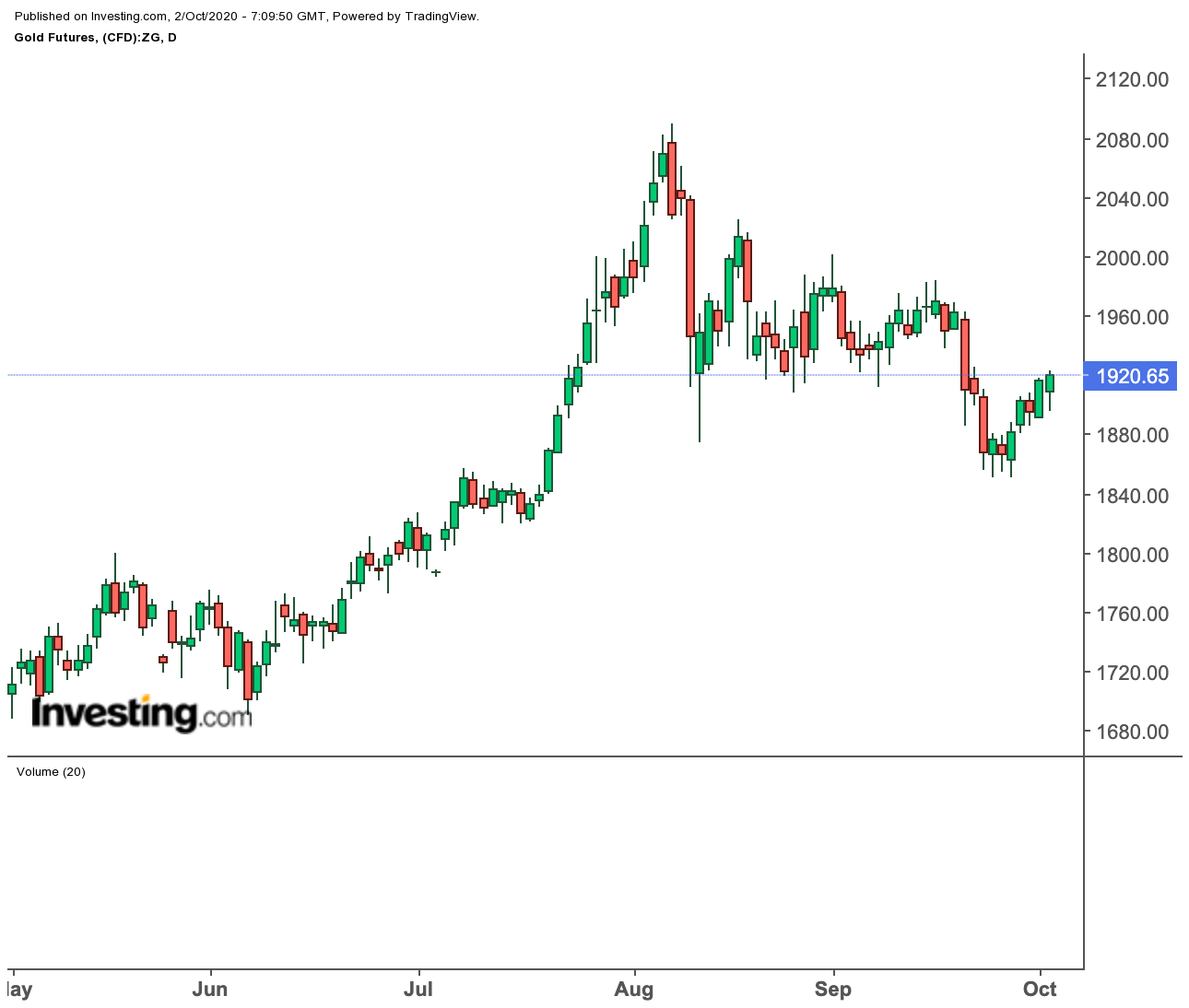 If gold cannot rally instantaneously on news that the president of the United States has been infected by the virus, then what will get it going?

Before answering that, it’s worth noting that it was the dollar that took off early Friday in the place of gold, returning to positive territory after two days in the red. The greenback remains a rock star among safe havens, exhibiting a momentum that has defied all common sense in the past two months.

The has gone from strength-to-strength since early August—despite a gaping U.S. fiscal deficit from coronavirus-related spending, a record recession, historic unemployment and other economic ills brought on by the pandemic.

The logic-smashing rally in the DX, as the index is also known, is the main reason for gold’s inability to recapture the $2,000 highs it fell from in August.

Now, with the president’s health at risk, the dollar continues going gang-busters.

But back to the question: What will make gold behave like the hedge it’s supposed to—not just for times of financial trouble but also political risk like this?

The answer—which is becoming increasingly apparent—is another U.S. economic stimulus.

Like junkies unable to withdraw from their drug of choice, investors in gold remain trapped in their addiction to relief money—and the dollar debasement that follows from each easing exercise.

While one can argue that the same can be said for equities, stocks move higher on an assortment of news sometimes. Other than the dollar’s drop, gold has been fixated on one thing only: stimulus, stimulus, stimulus.

At one time, missiles fired over the Middle East or tests conducted by North Korea could easily drive gold up by $20 an ounce. The so-called safe haven has become desensitized to all that now.

The Federal Reserve’s quantitative easing that began in the aftermath of the 2008/09 financial crisis has largely changed the attitude of investors in gold. Unless there’s easy—or lazy—money to be made, they are seldom excited.

The reason gold got to an all-time highs of nearly $2,090 an ounce in August from a seven-month low of just over $1,458 in March was due to the original  Coronavirus Aid, Relief, and Economic Security (CARES) Act and its iterations passed by the U.S. Congress in the first quarter. With the $3 trillion from that having dried up by the second quarter, more relief was needed, and gold bulls were waiting in the wings for the ‘ka-ching’ sound of the registers.

That never came, however, with the exercise proving just too contentious ahead of November’s presidential election.

Thus, Republicans aligned to Trump and Democrats opposed to the President have been locked in a stalemate on a successive package to the CARES since, arguing over the size of the next relief, as thousands of Americans, particularly those in the airlines sector, risk losing their jobs without further aid.

Trump, who stands for reelection on Nov. 3, has accused House Speaker Nancy Pelosi of playing football over the issue. Pelosi retorted that any deal should be to the advantage of Americans and not for Trump’s political expediency.

Disillusioned by all this, gold tanked to a two-month low of $1,852 in September. Yet, it delivered a remarkable third quarter gain of 5%.

After much back-and-forth in Congress, a breakthrough appeared likely this week when Treasury Secretary Steven Mnuchin reported on Wednesday that he has been having “effective” communications lately with Pelosi on a new stimulus deal.

The House Speaker, at a news conference early Thursday, confirmed that she had been in talks with Mnuchin and they would speak again later in the day. She also said she hoped to bring to a vote in Congress that day—a revised $2.2 trillion coronavirus relief bill if Democrats and Republicans could find common ground on tax breaks.

Pelosi has been trying to get the White House to agree since late August to the Democrats’ Health and Economic Recovery Omnibus Emergency Solutions (HEROES) Act, which the Democrats originally proposed at $3 trillion before reducing to $2.2 trillion and agreeing to further revisions in recent weeks.

Not surprisingly, gold prices took off on the news, reaching a session high just shy of $1,918 at Thursday’s early afternoon settlement on COMEX. But by evening, gold bulls had their balloon pricked again when Pelosi reported a no-go with Mnuchin. The reversal extended into Friday morning in Asia, where a session low of around $1,895 was registered.

In a commentary issued late Thursday that seemed apt for the gold crowd, FX Street wondered if picking the next President of the United States was as important to markets as Congress issuing another stimulus.