Gold: Stimulus Talk Or Not, Dollar Stops Precious Metal From Having Its Day

Monday was a phenomenal day for stocks, with the tech sector leading the run by posting its best day since July. While the outperformance on the and big names Apple (NASDAQ:), Amazon (NASDAQ:) and Facebook (NASDAQ:) had sectoral twists to them, the day actually began with a promise for risk markets: that talks will continue for a COVID-19 stimulus.

In fact, a $1.8 trillion plan to provide relief to millions of jobless Americans and prevent tens of thousands of airline workers from joining their ranks, should work wonders for too—provided such a stimulus gets passed, of course. Theoretically, any fiscal plan that ends up issuing more money should prop up gold, which is a hedge to currency debasement. 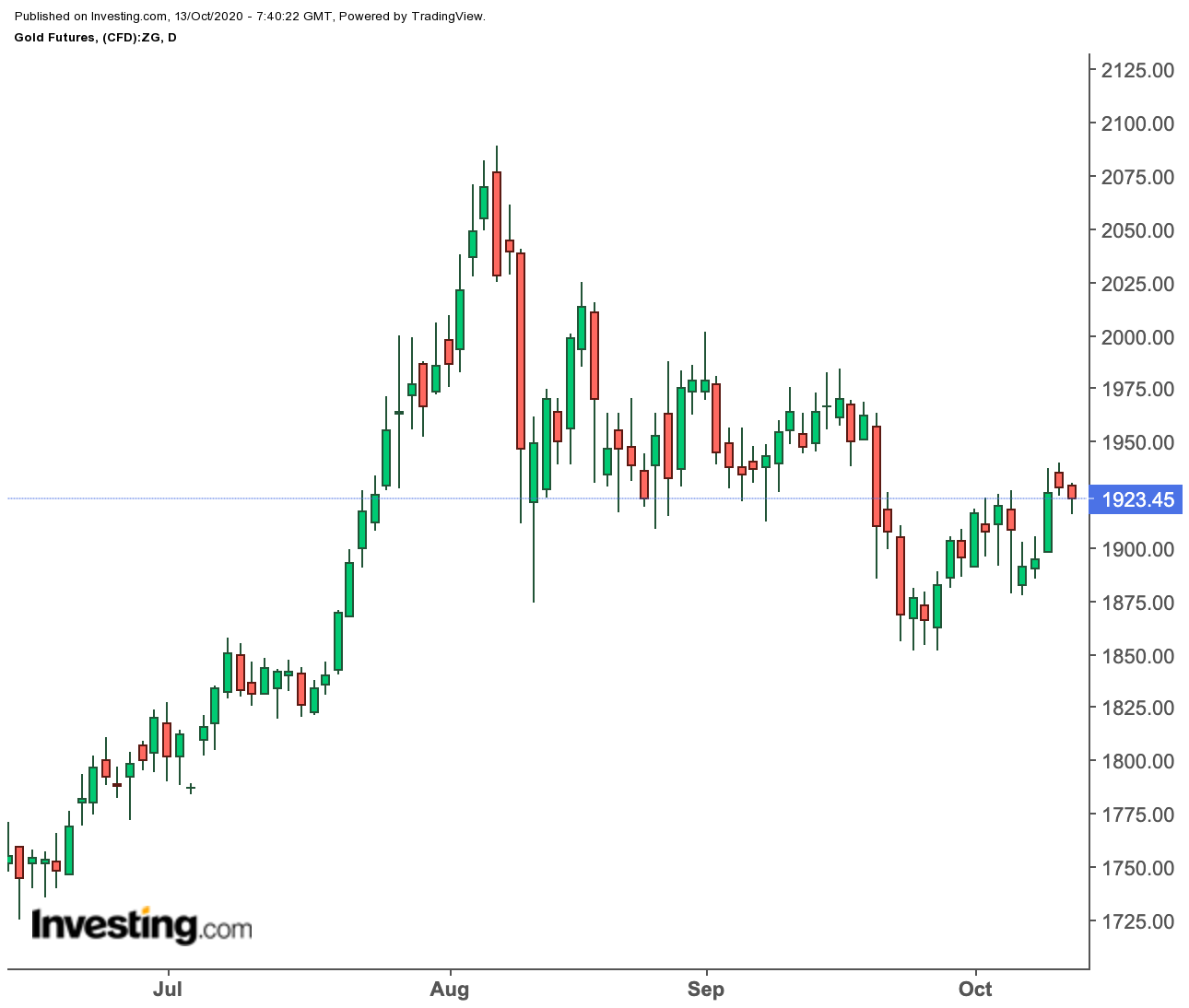 Conventional wisdom in recent days has it that the ideologically warring Republican and Democrat factions on Capitol Hill could still coalesce around a stimulus idea at some point in the next couple of weeks—although there is zero chance of them passing a package before the Nov. 3 U.S. election.

On Tuesday, President Donald Trump tried to steer the Senate toward approving a coronavirus relief plan by tweeting:

“Republicans should be strongly focused on completing a wonderful stimulus package for the American People!”.

Trump’s allies on Capitol Hill were, meanwhile, strongly focused on something else: the process that would confirm his Supreme Court nominee Amy Coney Barrett.

Still, the stock market rallied, as the stimulus talk lingered as a backstory to its optimism.

The main reason for gold’s decline: the stronger dollar.

The dollar: A currency that has gone from strength-to-strength since early August—despite a gaping U.S. fiscal deficit from pandemic-related spending, record recession, thousands of business closures, historic unemployment and other economic ills.

Strange times often result in stranger circumstances. No one’s denying that with COVID-19 and America’s politically divided society ahead of the 2020 Election, the country is facing its most extraordinary challenges since 9/11 and the Great Recession. Even so, logic should prevail. with gold and the dollar over the past two months has defied most parameters of financial and haven logic.

The , which pits the greenback against six major currencies, was up for a second straight day on Tuesday. It bounced back from a three-week low as market players bought it back, particularly against riskier peers, after Chinese authorities appeared to be trying to put a brake on recent rises in the .

According to Reuters, the dollar also got a boost after an overall jump in risk sentiment over bets that former U.S. Vice President Joe Biden will beat President Donald Trump in the presidential election and push forward with a large stimulus to shore up a pandemic-hit economy.

“Biden trades have been hot in the last several days, in which people sell the dollar, particularly against currencies that have suffered under Trump, like the yuan, the or the ,”

“If you think that Beijing is sending a message to rein in the yuan’s strength, then it might make sense to unwind that trade for now.”

That Biden would push for big spending to help his presidency is entirely logical.

What isn’t, is why the dollar should benefit from such risk and currency debasement and not a precious metal that ought to be a natural hedge in such circumstances—gold. Yet, the nonsensical slide of the yellow metal at the expense of the dollar continues.

Strategists at Singapore-based OCBC Bank said on Tuesday they were betting on gold returning to August highs of above $2,000—only “if the dollar continues to soften.”

Gold chartist Omkar Godbole said in a blog on FX Street that December gold’s pullback from Monday’s three-week highs above $1,939 to Tuesday’s session low of $1,915 could leave the yellow metal at the risk of a further selloff.

“A flag breakdown would shift risk in favor of a drop to the psychological support of $1,900.”