Gold Rally Dies Down As Indian Buying Dries Up, Fed Seen To Disappoint

Gold is at a crossroads, as both speculators, who’ve been chasing it higher, and consumers, who need to buy cheap, hit the pause button.

U.S. rating and research agency Fitch Solutions sees only gradual gains for the yellow metal, which has struggled in recent days to hold above the key $1,500 per ounce support.

All this is happening during Jackson Hole week, the Federal Reserve’s annual gathering in Wyoming that helps formulate monetary policy, which in itself affects gold prices.

On Wednesday, ahead of the Wyoming event, the Fed will publish of its July 30-31 meeting, where it cut rates for the first time in a decade.

The European Central Bank will also issue its July this week, reporting on Thursday, a day after the Fed.

No Easy Solution In Sight

A boon for gold would be hints of a rate cut that would add to the Fed’s 25-basis point reduction in July, or the ECB’s first easing in a long time.

After surging from under $1,300 in late May, gold’s rally has slowed, with investors waiting for more signs of central bank easing before committing to new long positions.

But Fitch Solutions doesn’t see such signs coming soon, not from Jackson Hole at least.

Said the forecaster in a note issued Monday:

“We expect that the market has turned too dovish on U.S. rates and a correction will take place in the coming months, which will take some upward momentum out of gold prices.”

In Tuesday’s Asian trading, benchmark U.S. on New York’s Comex were down again, extending their rout to a fourth straight day—the longest losing streak in the yellow metal since April. 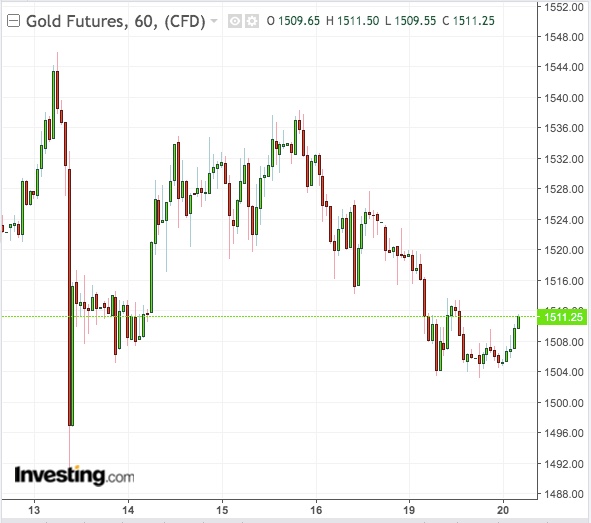 While the price depreciation over the four days itself was modest—a cumulative $25 or 1.6%—the real impact for gold longs has been the market’s slide from six-year highs above $1,546 on Aug. 13 to levels of slightly above $1,505.

The spot price of gold, which reflects trades in bullion, has already slipped beneath $1,500, holding at just under $1,498 on Tuesday.

Still Deemed A ‘Strong Buy’, But Support Under Siege

Investing.com’s Daily Technical Outlook maintains a “Strong Buy” on Comex gold, projecting a top-end resistance of $1,542.66. But the market’s current trend makes it more likely that the strongest support of $1,481.76 will be tested.

Back to India’s gold market, Bloomberg reported that, with demand growing 9% during the January-June period, jewelers had expected consumption to increase after a subdued couple of years.

But those hopes are fast fading. Full-year demand for gold in India is now expected to be at par with 2016, when consumption slumped to a seven-year low of 666 tons, as buyers restricted themselves to wedding-related purchases.

India’s gold consumption has also been hit by new high import taxes, which pushed domestic prices to an all-time high of 38,666 rupees ($541) per 10 grams last week. in Mumbai, in tandem with overseas , have gained about 17% since June on local factors.

Aside from central bank and China buying, India is the backbone of physical gold demand.

“Everything is hitting us at the same time,” N. Anantha Padmanaban, chairman of the All India Gem & Jewellery Domestic Council, was quoted saying.

“Our advice to all the jewelers is that at least for the next 40 days they have to lie low, not to invest much in jewelry, start selling whatever you have and then replace it. Imports will be weak.”

Fitch said it was neutral on gold over a three-to-six-month horizon as the current rally looked overextended.

“Gold prices have had one of their strongest months in years and net speculative long positions are now at a record high.”

“Given that we expect the Federal Reserve to disappoint the market by failing to cut U.S. interest rates further in the coming months, profit-taking will likely eventually take the wind out of gold’s rally. In the event of a pullback in prices, the $1,350/oz area will likely now provide support.”