It didn’t rally but neither did it crash.

‘s relative strength in the last 24 hours—even as the dollar rose—illustrated what a haven ought to be:

A hedge that can stand on its own, even when it’s expected to go in the opposite direction to its rival.

Both bullion and futures of gold settled in the green zone for a second straight day on Thursday as a risk-off mood coursed through markets after a spike in German and Italian coronavirus cases, COVID-19 therapeutic delays, movement and U.K. and .

If that isn’t enough, the din of confusion continued over what the White House wanted for a new COVID-19 relief deal.

Treasury Secretary Steve Mnuchin hinted at a modest and “targeted” package, suggesting that House Speaker Nancy Pelosi move some $300 billion of previously allotted money to needy Americans. President Donald Trump, standing for re-election in under three weeks, again floated a $1.8 trillion package, while rambling that he might even do more than the $2.2 trillion proposed by Pelosi. Senate Majority Leader Mitch McConnell, meanwhile, said he could only get votes for a $500 billion deal.

The myriad of uncertainties was the perfect recipe for a gold rally. 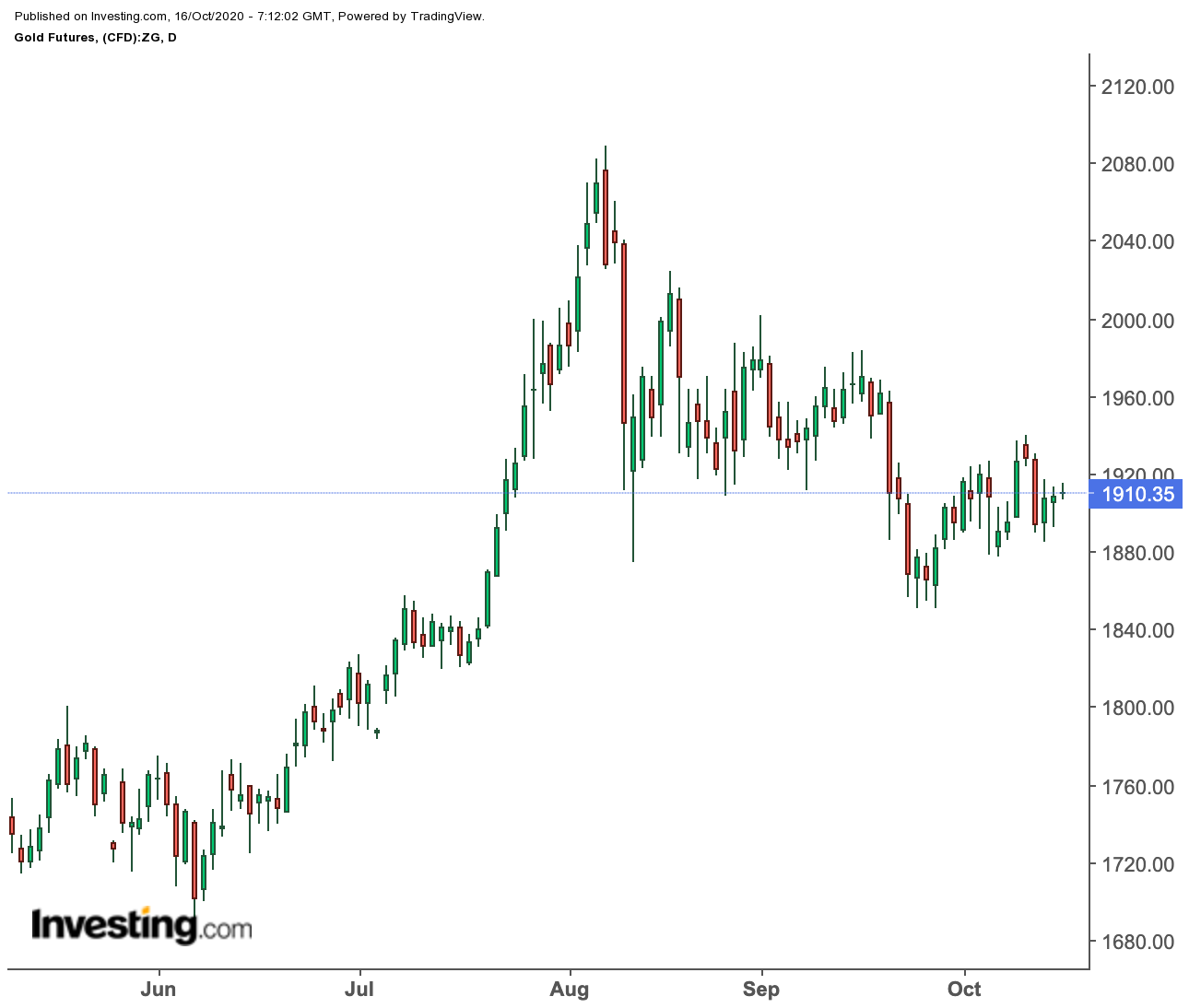 That the yellow metal saw just a modest bump higher on the day wasn’t the surprise. The real was that it climbed as the dollar rose. The , which pits the greenback against six major currencies, gained 0.5% on the day, strengthening at the 93.68 level.

Which Is The Greater Haven?

To be clear, gold’s role as a haven in the modern age of commodities investing is well established. The dollar’s standing as the world’s reserve currency has conferred a similar safety quality upon the greenback. But that veneer has been contested of late due to a gaping U.S. fiscal deficit from pandemic-related spending, record recession, thousands of business closures, historic unemployment and other economic ills.

Gold and the dollar have moved in the same direction before, but its correlation that’s rare—almost worthy of a champagne pop.

In the early days of the COVID-19 outbreak in March, both were briefly higher at the same.

Then they diverged, with gold gaining a whopping $500 an ounce, or 30%, by August to hit record highs of almost $2,090 an ounce. The dollar, meanwhile, fell 7% in the five months to August.

After what seemed like an eternity, the pair moved in unison again on Thursday.

But by Friday, they went their separate ways, with gold trending marginally higher in Asian trading while the dollar slipped a little.

Most gold watchers seem convinced about one thing: the yellow metal will reassert its supremacy over the dollar after the Nov. 3 U.S. election and the expected major economic stimulus package issued by the winner.

According to Edward Moya of New York brokerage OANDA, referring to Democrat candidate Joe Biden and the blue colors of his party:

“Fiscal stimulus before November 3rd seems less likely and if the election yields a blue wave, Biden’s infrastructure spending plan will be very negative for the U.S. dollar and in turn positive for gold.”

Gold chartists agree, saying some near-term strength might also be in store.

Daily volume increased by around 31,200 contracts, “prolonging the choppy activity seen as of late”, Piovano wrote.

“The move was accompanied by increasing open interest and volume, allowing for the continuation of this trend in the very near-term. That said, the next target of relevance is located at the so far monthly peaks near $1,920 per ounce (Oct.12).”