Gold Momentum: It’s A Tug-of-War With Yields And The Dollar

Is the selloff in over?

I’m inclined to say your guess is as good as mine—although the evidence suggests that this should not be a question, especially now that significant additional fiscal spending is expected under the Biden administration, today.

To those adept with the art of hedging inflation, the events of the past two weeks would have been unsettling, to say the least. Gold, one of the safest assets through most crises, be it economic or political, lost 3.5% for its worst two weeks since mid-to-late November.

While the rout from two months ago was an understandable reaction to the risk-on fervor across markets after COVID-19 vaccine breakthroughs, the latest selloff looked suspect from the start and its longevity questionable. 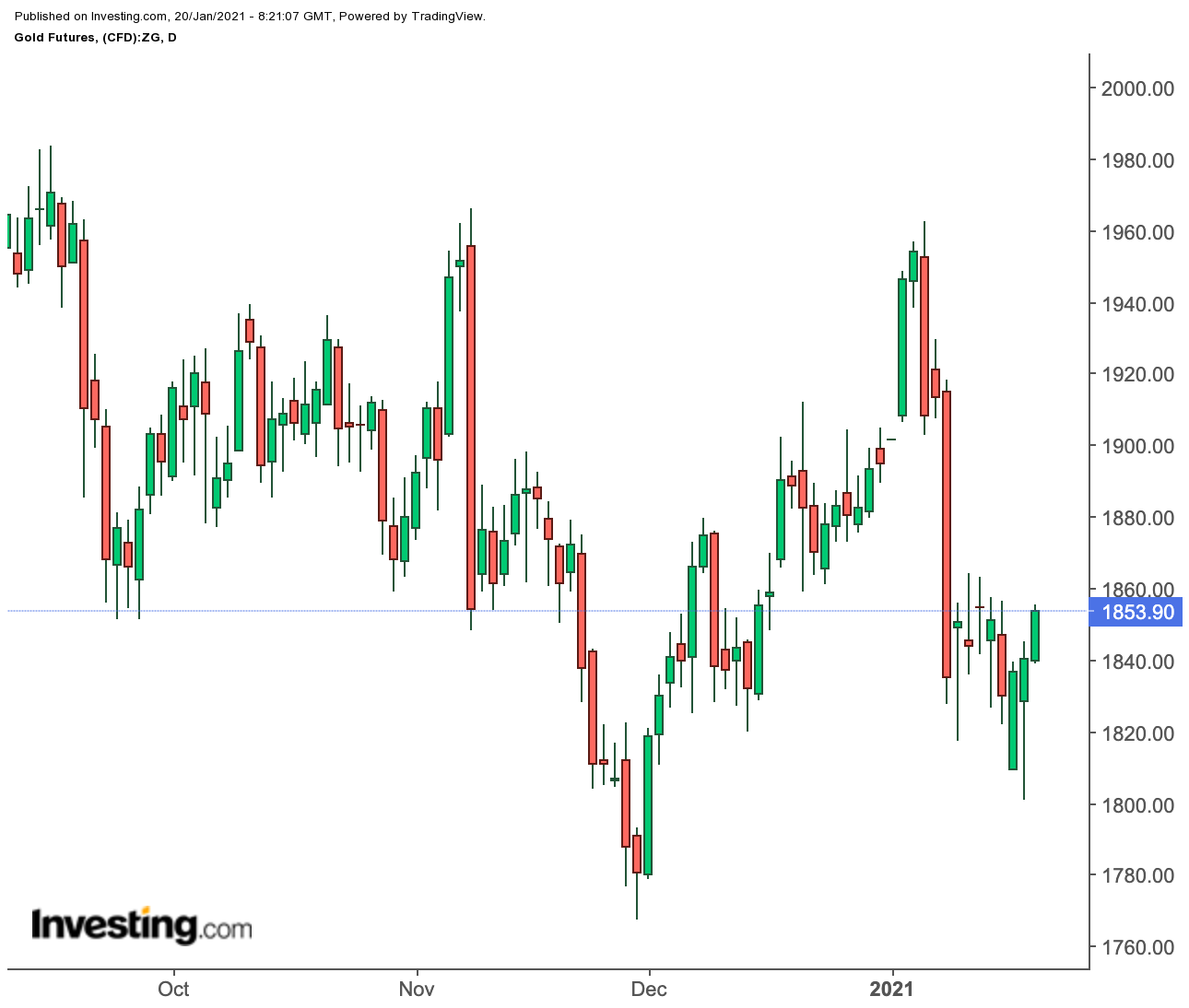 The blame for gold’s weakness over the past fortnight was laid mainly at the door of U.S. bond yields, namely that of the benchmark Treasury note. With the last piece of the legislative jigsaw—the Senate—finally coming under the Democrats’ control, which will enable most of incoming president Joseph Biden’s agenda, non-yielding gold shockingly lost the stimulus rally to the 10-year yield.

In markets, every action, regardless of its foolery, has to be explained and justified. So it was too with the pop in bond yields.

This was flagged by traders’ expectations of higher interest rate pressures forming from the forthcoming economic stimulus that could kickstart the economy, labor market and ultimately wage inflation. Suddenly, the chief beneficiary of the trillions of dollars of pandemic-related spending under Biden appeared to be yields, the and even —not gold, the proven hedge for inflation.

Never mind that during the week when yields almost doubled, Federal Reserve officials were vehemently denying the possibility that the economy or wage inflation would be strong enough anytime soon to warrant a tapering in stimulus or hike in rates that stand at near-zero. Bond traders remained unimpressed with the Fed speak and forex dealers, sensing an oversold dollar as the year began, were all too happy to conspire in upsetting the apple cart of gold hoarders.

As I write this, the dollar has lost some of its mojo, with the key gauge for the greenback against six major currencies, the Dollar Index, sliding for a third straight day to a one-week low of 90.31.

futures on New York’s COMEX, correspondingly, hit a near one-week high, breaching $1,850 an ounce. They tumbled to a November low of nearly $1,804 just on Monday as gold futures traded on limited volume during the U.S. Martin Luther King holiday. Prior to the carnage of the past fortnight, gold futures were at nearly $1,963 as the first week of January ended and just about $130 from breaking record highs of almost $2,090 set in August.

Sunil Kumar Dixit, technical analyst for gold at SK Dixit Charting in Kolkata, India, says, in the immediate term, gold futures could make an attempt for the pivotal $1,890 level.

“As long as the price sustains above $1828-1838, traders will be trying to chase the 200 period Simple Moving Average on the 4-hour chart, which sits at $1,870 and 50 Extraordinary Moving Average on daily chart. If this level finds enough buying with volume support, look for 1890 which can be a turning point in the short term. Also the stochastic Relative Strength Indicator is positive in daily and four-hourly time frames.”

So, what’s suddenly changed with the dollar/gold play that didn’t happen the past two weeks? Essentially nothing. Only that the same message to stimulate the economy and to stimulate it BIG came this time from Biden’s Treasury Secretary pick, Janet Yellen. We’ll come back in a moment to the former Federal Reserve chair and the extraordinary conviction that she seems to provide to traders which might be the key to that economic recovery the bond market is seeking.

For now though, the following factors will determine if gold retains its momentum to stake its claim on the $1,900 berth and beyond in the medium- to longer-term, or slips back into the role of the forgotten stepchild of the inflation mix:

Victor Dergunov of the Albright Investment Group makes a salient point: at the current 1.1% yield on the 10-year note, the annual servicing payment for the U.S. would amount to roughly $370 billion.

Right now, the national debt is approaching $28 trillion, and the United States’ total debt-to-GDP sits at a stunning 146%.

The U.S. federal budget deficit itself is already at $4.5 trillion or so, after adding the Trump administration’s $3 trillion plus COVID-19 stimulus from last year.

If the 10-year note’s yield rate stands at 2%, coupled with a $30 trillion national debt, annual servicing payments would amount to approximately $660 billion.

“I don’t think that rates are likely to go notably higher or even stay elevated for a prolonged time frame. This is unlikely due to enormous national and overall debt loads in the U.S. The economy is not likely to illustrate adequate growth (at) a higher rate, or in a ‘normalized’ rate environment for that matter.”

“These (deficit numbers) are remarkably elevated figures, and we have to consider that this gigantic debt load needs to get serviced perpetually.”

M2 is a calculation of the money supply that includes all elements of M1 as well as “near money.” M1 includes cash and checking deposits, while near money refers to savings deposits, money market securities, mutual funds, and other time deposits. These assets are less liquid than M1 and not as suitable as exchange mediums, but they can be quickly converted into cash or checking deposits.

While the United States appears to be in the relatively early stages of a monetary expansion cycle, the M2 base could still increase substantially and set the country up for a return to the 2008/2009 financial crisis days.

With the dilution of the fiat monetary system, higher inflation is most certainly on the way. Gold prices have a very strong correlation on a long-term basis with monetary base expansion. Despite the rout of the past two weeks and shorter-term gyrations, there’s a solid case—as solid as gold itself—for the yellow metal’s prices to rise in the near future.

Fed Reserve Chairman Jay Powell sent out mixed messages last week. First, he dismissed any speculation of a rebound from the pandemic. But he also said in the same breath that “there are a lot of reasons to be optimistic about the U.S. economy” and that we “could be back to the old economic peak fairly soon.”

That triggered a problem for markets: Figuring out how quickly the economy could rebound with the help of COVID-19 vaccines.

Speaking of vaccination, it’s like a tale of two cities in some instances: New York Mayor Bill de Blasio says his city will run out of doses by next week, while Florida’s Tallahassee is pacing out its shots on Governor Ron de Santis’ order. In the meantime, the new U.K. variant of the virus, called B.1.1.7., could be dominant by March, says the U.S. Centers for Disease Control and Prevention.

Notwithstanding its rebound in the third quarter, the U.S. economy remains dire, with COVID-19 hospitalizations and deaths hitting new highs in recent weeks. The United States remains the country worst hit by the pandemic with more than 23 million cases logged since January 2020 and over 400,000 deaths.

On the employment front, the United States lost more than 21 million jobs between March and April 2020, at the height of business lockdowns forced by the coronavirus. A rebound of 2.5 million jobs was logged in May and 4.8 million in June, before the recovery began slowing. For both September and October, less than 700,000 jobs were added each month. In November, there were just 245,000 additions while December saw a loss of 140,000 jobs—the first such decline since April.

The weak trend in the labor market has continued into 2021, with 965,000 Americans for jobless benefits in the week to Jan. 9, up 23% from the previous week, and the highest in nearly five months.

Powell admits as much, that there’s “plenty of slack” in the labor market and that it’s unlikely wage pressures alone will soon reach levels that could create or support higher inflation. He adds:

“The other factor to look at is the world shortage of demand. In lots of large advanced economies, in countries around the world which began this crisis, there are deeply negative interest rates and little policy space for interest rate hikes. All that is going to hang around for a while, and you know, the U.S. economy is strongly integrated with the rest of the world. That’s going to matter.”

As Jeff Halley, head of Asia Pacific research at OANDA, noted in his Wednesday morning brief, Wall Street got back to the business of buying equities, selling the dollar and boosting gold after hearing the soothing assurance of Janet Yellen that taking on more debt was fine, so long as it was for the greater good of healing the economy from the pandemic of the century.

Yellen’s testimony before a Senate hearing on Tuesday to confirm her appointment as Treasury Secretary, had all the magnetism of a Gordon Gecko speech, minus the “greed,” of course.

The Yellen, or Y-Factor (the Y being for yes!) could go a long way in pressing Biden’s agenda on spending and economic recovery over the next four years at least. At 74, the former Fed chair brings decades of economic policy experience and is respected on both sides of the aisle in Congress and also by international finance officials, progressives and business interests.

Biden also needs Yellen for another reason—his stimulus plans might still meet resistance in the Senate due to the simple majority that his Democratic Party commands.

Stimulus measures are still part of the U.S. budget, and without a super-majority of 67 out of the 100 seats in the Senate, they run into a process called “reconciliation” that can only be overridden by a minimum of 60 votes (Democrats and Republicans both have 50 seats in the Senate now, with incoming Vice President-elect Kamala Harris having an additional vote to break the tie).

This reconciliation bit has led to concerns that large stimulus efforts by Biden won’t easily pass muster with the Senate, especially with Republican fiscal hawk Mitch McConnell returning as Minority Leader to make legislation in the upper chamber of Congress as much of a living hell for the Democrats as it was when he presided as Majority Leader.

Yet, top Senate Democrat Chuck Schumer might still get a string of mid-sized stimulus packages through with bipartisan outreach and achieve Biden’s targets—with Yellen’s help.

“They wanted to hear more stimulus, and Ms Yellen delivered 1.9 trillion reasons on that front.”

“Right now, with interest rates at historic lows, the smartest thing we can do is act big. In the long run, I believe the benefits will far outweigh the costs, especially if we care about helping people who have been struggling for a very long time.”

GOP rep who offered to work with ...