pop at $1,800 came as resoundingly as the cork flying off a champagne bottle, and with precious metals bulls having had their taste of the sparkling liquid, here’s some not-so-settling news: It may take a while for the next big milestone.

Fears of a second wave of US coronavirus infections and the feel-good factor about the trillions of dollars of stimulus put to work worldwide in fighting the pandemic should keep gold supported at, above or at least not too far below the $1,800 an ounce handle. 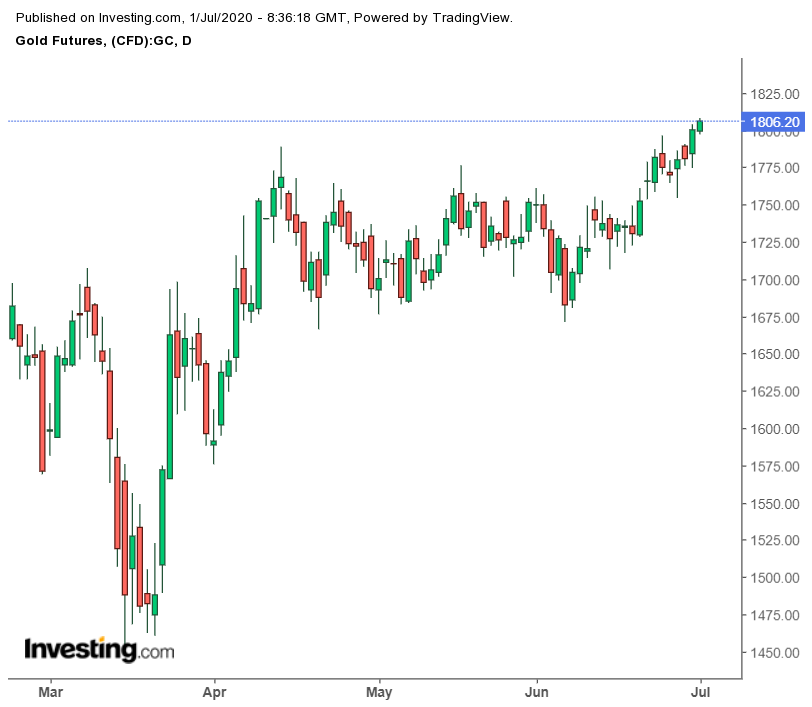 That should please the safe-haven crowd that has stuck with gold for nearly nine years now, watching their fortunes rise and fall with the peaks and valleys charted by the metal since the September 2011 record high of $1,920.85 for and $1,911.60 for US COMEX futures.

But those hoping to quickly rewrite those highs with loftier prices like $2,000 or even $2,500 might have to wait.

The idiosyncrasies of gold over the past two years, which include its hardly perfect inverse relationship with the and , along with the possibility that the US economy may continue seeing strong recovery from COVID-19, mean it could disappoint those with such targets.

“I’m not trying to dampen the enthusiasm of the rally to a new contract high,” gold commentator James Hyerczyk wrote after Tuesday’s $1,800 run.

“I’m just making an observation that the buying could have actually been weak, and perhaps not even fueled by new longs at all, but rather short-covering,”  added Hyerczyk.

“This is to inform traders that they should be careful about chasing the market higher at current price levels.”

On Wednesday spot gold and COMEX futures were both up less than $5, or 0.25%, each, ahead of the release of the for the Federal Reserve’s June meeting later.

The minutes could help gold traders get a better read on the tea leaves on the Fed’s monetary policy plans for July and beyond, following reassurance by to Congress on Tuesday that the Fed would keep rates near zero and do whatever it takes to restore economic growth lost to the pandemic.

US jobs data—the June , to be precise—due on Thursday, will show if the surprise increase of 2.5 million jobs in May was a one-off, or something that might continue. For what it’s worth, a consensus of analysts tracked by Investing.com projects 3 million new jobs were created in June.

More jobs would suggest stronger economic recovery, despite the restraint across the US in reopening businesses following the increase in cases of COVID-19 over the last month. That would boost investor appetite for risk assets like stocks and lessen the need to hedge with safe havens like gold.

Hyerczyk unscored that point in his caution to those who might be expecting a linear move up in gold prices.

“We know the reasons to be long gold over the long-run, but the short-term plays have been tricky since April.”

“Most of the money made in playing the long side of gold since April has been coming from buying dips, not buying upside breakouts.”

“Based on this assessment, I stand by my warning, be careful buying strength and chasing gold higher.”

Another gold strategist, Christopher Vecchio, wrote in his after-market blog on Daily FX on Tuesday that gold could enter a greater period of volatility around the $1,800 channel—as evidenced in the past five months since the market scaled $1,600 in January.

“Absent the recent rally in gold prices has been a commensurate rise in gold volatility,” Vecchio wrote.

Vecchio explained that gold prices had a relationship with volatility unlike other asset classes, even including precious metals like silver which have more significant industrial uses.

“While other asset classes like bonds and stocks don’t like increased volatility–signaling greater uncertainty around cash flows, dividends, coupon payments, etc.–gold tends to benefit during periods of higher volatility,” he said.

Heightened uncertainty in financial markets due to increasing macroeconomic tensions also increased the safe haven appeal of gold, he added.

Jeffrey Halley, senior markets strategist in Sydney for New York-based online trading platform OANDA, concurred. “Technical resistance is formidable here,” Halley wrote, nothing though that “only a fall below $1740 will challenge the bullish narrative.”

“Most likely, gold will content itself to trade between $1760 and $1790 over the next few sessions.”