Gold, Lost Amid Oil’s Mega Rally, Could Flounder After Fed

As the world’s attention was riveted to the super rally in oil on Monday, investors in gold were left to their own devices, fumbling with little direction on the geopolitical premium appropriate for the safe-haven asset after the historic drone attacks on Saudi Arabian oil fields.

In the end, and of gold both added less than 1% each to cross the finish line at just slightly over $1,500 an ounce. Crude oil benchmarks and , meanwhile, jumped about 14% each.

In Tuesday’s early hours in Asia, it was back to anemic trading for gold, as traders remained nonplussed on how to continue pricing the yellow metal in the aftermath of the attacks and ahead of what would be an even bigger event for investors — the Federal Reserve on Wednesday.

To be fair, gold’s clueless state now has as much to do with the hyper uncertainties in oil. While oil bulls and bears both agreed that the path of least resistance for crude in the immediate term was up, without clarity from Saudi officials on the exact turnaround time for the output halted in Saturday’s attacks, it was nigh on impossible to say if oil prices should continue rising when they might have to drop instead. Indeed, WTI and both retreated in Tuesday’s trade.

But leaving the influence of oil aside, since the start of this month gold has shown very little of its “June-August charm” which effortlessly took it to six-year highs and seemed at one point even ready to carry it beyond $1,600. Bullion is up about 17% on the year, with virtually all of it coming from the June-August stretch.

In a column a few days back, I asked if the longs in gold will be ready to reach for the stars if the Fed cuts rates again on Sept. 18. Or will they be content to just land on the tree-tops?

If this week’s activity is any indication, then tree-tops is the answer for now. 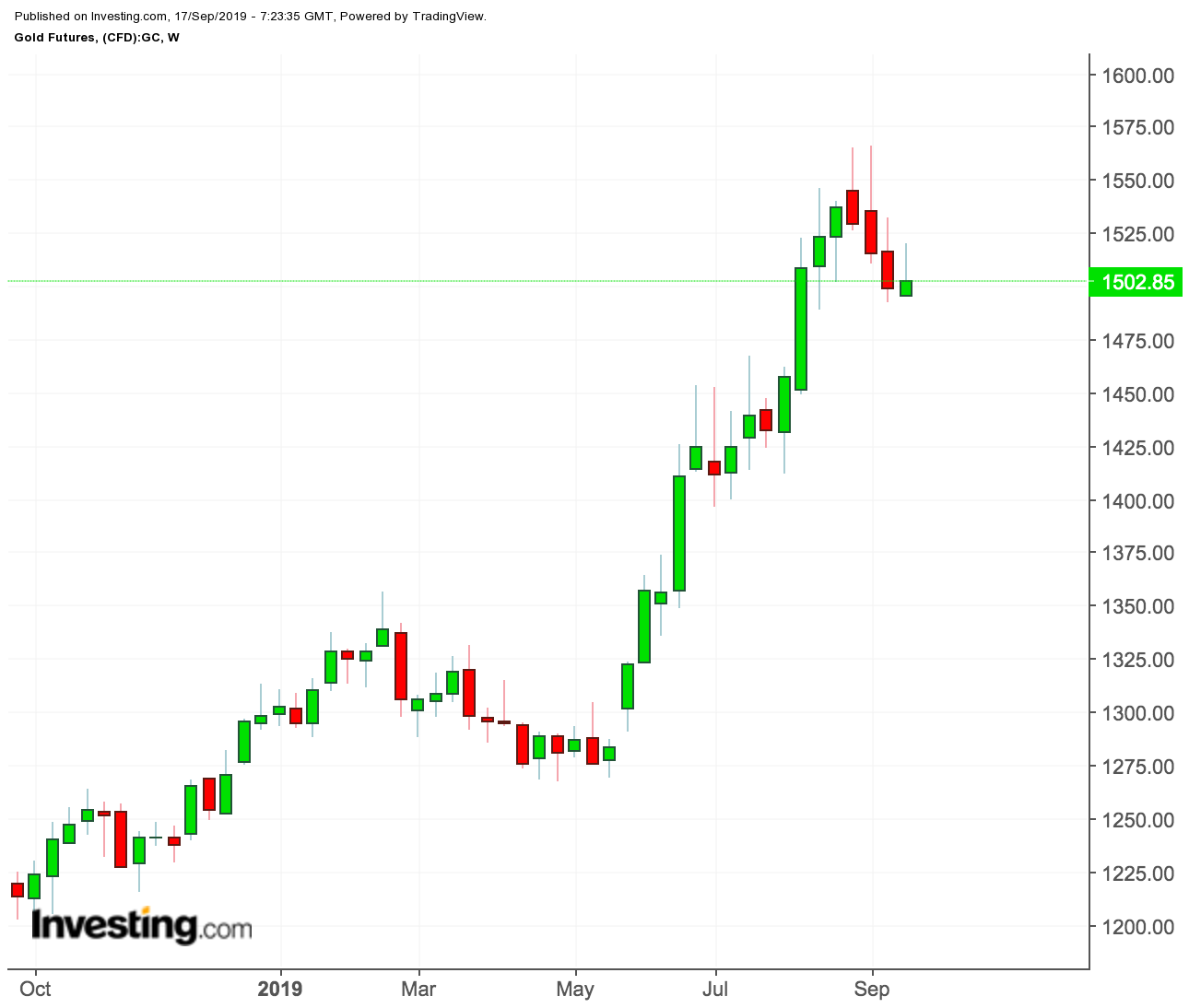 It’s starting to look evident that gold will hang out at just over $1,500 or slightly below that, awaiting the Fed’s rate decision — which will likely be another 25 basis points lower, just like in July, which most traders are betting on.

From there, unless Fed Chair provides sufficiently dovish guidance in his post-meeting , it’s likely that gold will fall to $1,480 or around there soon after.Backing this prognosis is a note from Canadian broking group TD Securities, which says:

“Given that the market is pricing in additional 60bp of cuts by end-2020, forward guidance will be key,” analysts at TD Securities said in a note. “Our base case is one of disappointment, resulting in a bear flattener.”

Aside from the Fed’s policy text, traders will also be able to see the “dot plot”, where officials of the central bank’s Federal Open Market Committee (FOMC) give their own individual estimates on where the benchmark rate should be.

Economists say that for the median dot to show another rate cut, many Fed officials will have to dramatically lower their own rate projections. There is no certainty that the majority of the 12 voting FOMC members would do this.

Without indications of more easing on the dot plot, the market will count on Powell’s news conference for guidance on whether the Fed will turn more dovish soon. Despite U.S. President Donald Trump’s constant heckling and demand for sharply lower rates, Powell has walked a fine line in balancing the market’s expectations for Fed intervention and telegraphing to the world where he thinks rates ought to be.

But Gold Could Still Finish Year In $1,600 Range

My immediate tree-tops scenario for gold doesn’t mean I’m bearish on the yellow metal in the coming months or beyond.

On the contrary, I believe that we need a safe haven and gold is still the best one out there as the world economy continues lumbering on a path that comforts no one, and the biggest wildcard — the U.S.-China trade war — remains unresolved.

I still expect gold to finish the year in the high $1,600 bracket or more if the Fed stays in an easing mode through its October and December meetings.

And if that momentum carries into 2020, gold could even launch an assault on the all-time highs above $1,900 that it achieved in U.S. dollars back in 2011. Gold has already hit record highs in every currency that matters this year, bar the .