Gold Is A Better Investment Than Silver – Here’s Why

Let’s test this against some measures I’ve used for deflation/inflation. I’ll use the weekly chart of USDX vs gold price, weekly, going back to the beginning of 2008.@Gold&Silver 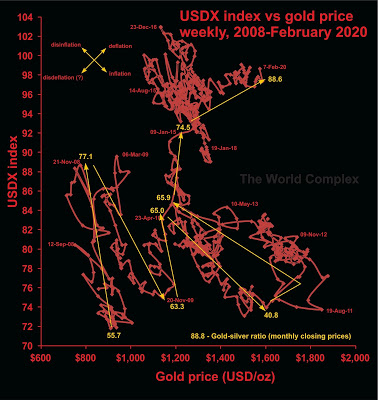 It is a busy visual, but what we want to do is look at longer-scale variations.

The graph above suggests that:

Why Gold Remains A Better Investment Than Silver

As long as debts are created beyond any ability to repay them, deflationary conditions will rule [and], as long as deflationary conditions persist, the gold-silver ratio may rise without limit and under such conditions, despite the gold-silver ratio being pretty much the highest in history, gold remains a better investment than silver. As much of the actual deflationary effect is brought about by cycles of inflation and disinflation, however, there are brief intervals where silver makes a better investment than gold.

Rather than using the level of the gold-silver ratio as your selection criterion, you need to look closely at monetary policy instead.