were on track to mark a second consecutive gain Thursday after the European Central Bank cut euro zone interest rates and delivered a batch of measures intended to boost the region’s sluggish economy — bullish moves for bullion.

The ECB cut its deposit rate further into negative territory, decreasing it by 10 basis points to negative 0.5%, while also announcing it would restart its monthly bond-buying program as it attempts to juice inflation and the euro zone economy.

Trading for precious metals also comes as U.S. President Donald Trump said late Wednesday that the U.S. would delay implementing fresh tariffs until Oct. 15 on $250 billion in China goods that were due to take effect on Oct. 1.

Trump’s action was taken by the market as a reflection of softening tariff tensions amid the Sino-American trade clash and comes ahead of a new round of negotiations between the world’s superpowers to resolve the conflict that is set to take place at an unspecified date in early October.

This article is for general information purposes only. It is not investment advice or a solution to buy or sell securities. Opinions are the authors; not necessarily that of OANDA Corporation or any of its affiliates, subsidiaries, officers or directors. Leveraged trading is high risk and not suitable for all. You could lose all of your deposited funds.

A rally for gold comes as the U.S. dollar also scored a post-ECB gain along with U.S. stock-index futures and bond prices.

As measured by the ICE (NYSE:) , a gauge of the greenback against a basket of a half-dozen currencies, was 0.2% higher at 98896, heading into positive territory after Europe’s central bank. A stronger dollar usually makes dollar-pegged commodities like gold less attractive to buyers using other currencies.

However, expectations that the U.S. Federal Reserve may be influenced by the ECB also helped to drive bond yields lower, offering support for bullion, which doesn’t offer a yield. The note yield was down nearly 5 basis points to 1.684% early Thursday from 1.733% late Wednesday.

Policy measures implemented by the ECB come ahead of the Fed’s monetary policy gathering, where policy-makers are widely expected to cut U.S. interest rates by 25 basis points on Sept. 18.

Reductions to global interest rates and some $17 trillion in government debt that offers a negative yield have helped to bolster appetite for alternatives assets like gold, considered a haven during times of economic uncertainty.

The ECB is committed to monetary stimulus and we will see calls for fiscal policies grow. Next week, the Fed will deliver the next batch of news that should support gold’s bullish case. 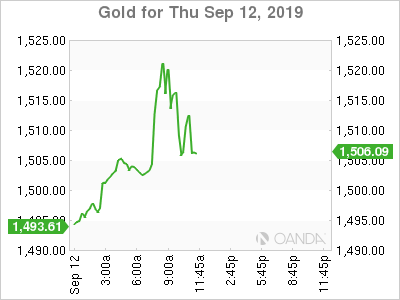 With A New Saudi Oil Minister In ...