Gold, Dollar In Unusual Twist Ahead Of U.S. Election

For the last three days, has been trapped, moving just $10 in either direction, at just above $1,900 an ounce. This might be understandable to equity investors, as there is often low volatility and caution ahead of a presidential election, and this year’s bitterly contested race could end up in the courts. But gold is supposed to be a hedge to such an event. 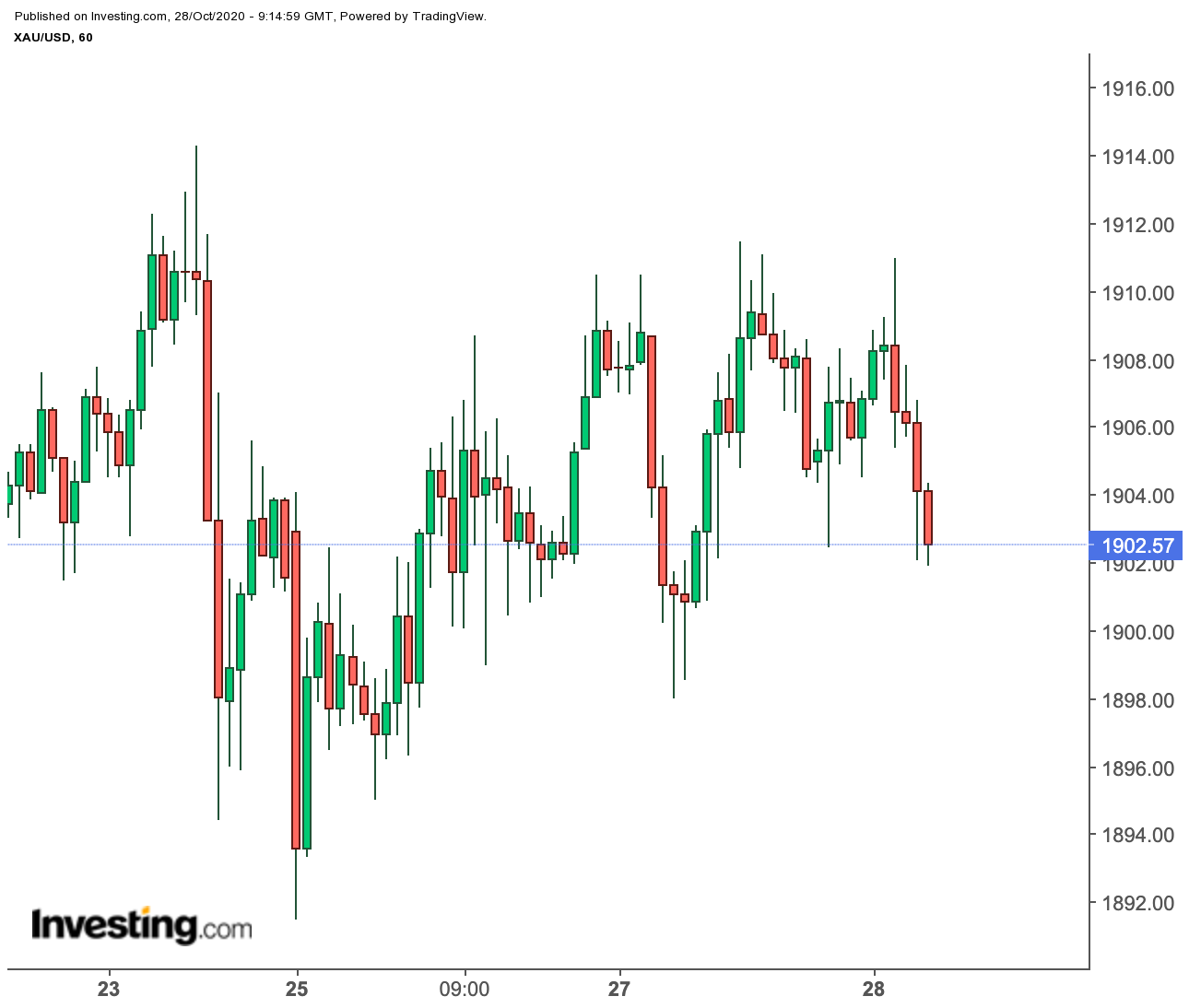 It is an enigma. Since Friday gold prices have failed to achieve a significant breakout. This is all the more perplexing when the has dipped—which typically allows the yellow metal to behave like the safe-haven it ought to be.

While the greenback was back up to weigh on gold by the time this article was being put together, I could empathize with readers who mailed me on Friday asking if the dollar-gold inverse correlation trade had broken down.

My reply was binary:

“Very briefly, maybe. But not over the longer stretch, with all things being equal, the cost of responding to the coronavirus will be the most important variable in pushing gold higher.”

Dollar Needs To Give More, Stimulus Has To Happen

In other words, what I meant was, for to flex its haven muscle:

Interestingly, in the first instance, Reuters that while the dollar was up Wednesday morning in Asia, investors were avoiding big moves and risks ahead of the Nov. 3 election. This was despite the tumbling on signs that France could reintroduce a national lockdown amid galloping coronavirus cases. 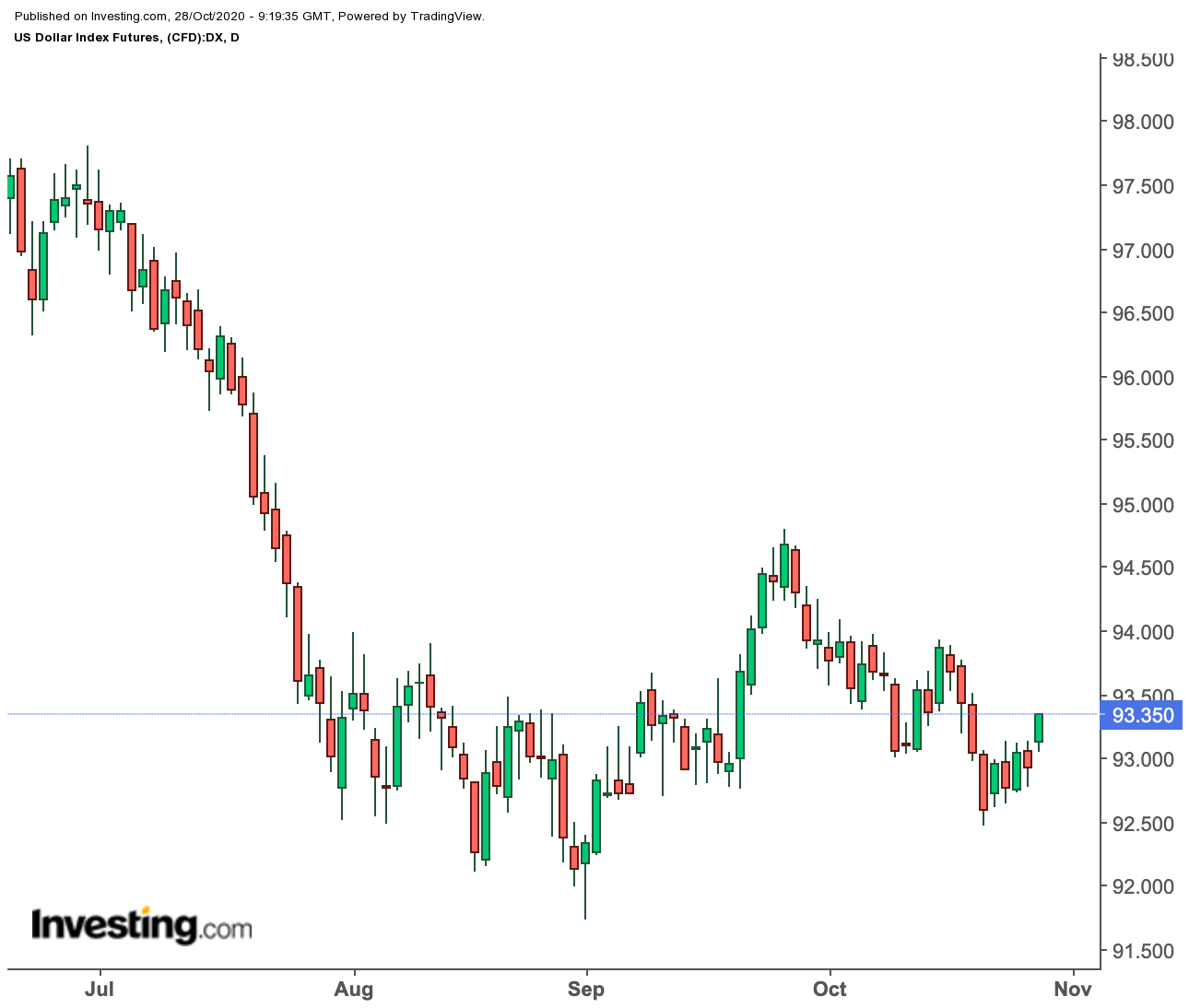 The report adds that despite the greenback’s gains, sentiment for the dollar showed signs of turning bearish, with the election less than a week away.

Some investors were prepping for increased volatility as the second wave of coronavirus in Europe and the U.S. threatens economic growth and the uncertainty over the election outcome keeps investors on tenterhooks.

“The COVID-19 spike is certainly a concern for France and southern Europe, so the euro’s upside is heavy … I don’t expect the dollar to gain much against elsewhere, because people have been overly complacent about how markets will react after the U.S. election.”

Wednesday’s early action in the dollar reaffirms my colleague Kathy Lien’s that investors were dumping the dollar ahead of the U.S. election.

Lien, who analyzes the forex markets for Investing.com, adds:

“There’s a very good chance that the next president of the United States won’t be decided on Nov. 3, which explains why investors are compelled to reduce exposure and cut positions ahead of the election, especially after record-breaking gains in stocks this year.”

For proof, Lien cites a flurry of U.S. economic reports released Tuesday—including that rose strongly in October and that increased for August—none of which lent much support to the greenback.

Lien also noted that the biggest non-market story of Tuesday—the confirmation of Supreme Court Judge Amy Coney Barrett, who could play a role in deciding how mail-in ballots are counted in states where President Donald Trump was locked in tight races with his Democrat opponent Joe Biden—may have affected the dollar more than any economic forecast.

Thursday’s third-quarter U.S. could determine if the dollar catches a stronger bid or gold gets a bigger run.

The consensus at the moment is a 32% quarter-on-quarter annualized growth, although the Atlanta Fed’s model puts it even higher, at 36.2%, up from 35.3% a week ago.

If the dollar’s slide deepens, how well could gold do in the coming days or couple weeks?

Should that test be successful, the subsequent target would be COMEX’s Sept. 16 high of $1,983.80, before a return to the $2,000 levels highly anticipated by gold bulls.

Investing.com itself has a “Buy” signal on the Daily Technical Indicator, with the near-term target set at highly-probable $1,932.66.

“Gold has been juggling through supports and resistances in the wake of lack of clarity of stimulus and high voltage presidential elections due on November 3rd. Sellers have been trying to push the haven asset metal below the psychological handle of 1900 towards 1894-1882. On the lower flanks, gold found buyers at value areas at $1,848.”

“It is widely expected that until elections are over, traders will keep trading gold within these levels and with an optimized trade lot sizing and money management, the range trade allows ample opportunities to book profits.”

For good measure, he adds:

“Mind your risk and lot size. Don’t try to insert a Jumbo jet up your nose.”