Gold Could Be Poised For A Rally

was the first commodity to reach a new all-time high in the aftermath of the 2020 global pandemic. In August 2020, the yellow metal rose above the $2000 per ounce level for the first time and traded to a peak at $2063 on the nearby COMEX futures contract.

Meanwhile, gold had been moving higher before COVID-19 gripped the world. In June 2019, the precious metal broke out to the upside when the price rose above the July 2016 $1377.50 high. Gold rose to new record prices in , , , and most other currencies in 2019 and 2020 before achieving the feat in terms.

Since reaching its all-time peak, gold has made lower highs as it passed the bullish torch to other commodity asset class members. In 2021, , , , coal, and other raw materials reached record levels. Other commodities, including energy, metals, grains, and other agricultural products, reached multi-year highs.

The rise in commodity prices has been nothing short of a bullish relay race, with one commodity handing the baton to the next.

Gold has been sitting in the background during the rallies in other commodities, consolidating and digesting its 2019 and 2020 gains. It may only be a matter of time before the bullish baton passes back to the precious yellow metal that is sitting near its consolidation pivot point at the $1800 per ounce level.

Since mid-June 2021, December COMEX gold futures have settled into a trading range with $1800 as the pivot point. The level has been a price magnet during corrections and rallies. Meanwhile, some technical indicators had shifted since mid-June when gold began its mostly sideways trading range.

The daily chart highlights some of the changes since June 17, when December gold futures moved below the $1800 level. Open interest, the total number of open long and short positions in the COMEX gold futures contracts, moved from 476,313 to 507,616 on Nov. 2, a 6.6% increase. The metric’s rise could be a sign of value buying in the gold market.

Price momentum and relative strength indicators were falling towards oversold conditions on June 17. On Nov. 2, they were sitting below neutral readings. Daily historical volatility fell from 18.51% to 10.62%, pointing to sleepy price action in the gold future arena.

The reasons that gold will shine

The gold market is sleeping as of nearly November 2021. Gold was the first commodity to reach an all-time high when the price rose to $2063 in August 2020. Since then, the yellow metal handed the bullish torch to other commodities that have reached multi-year highs for record prices. The secular bull market in commodities continued this week as and prices made new highs. Cryptocurrencies are sitting near record territory.

The following factors favor higher gold prices over the coming months and years:

Inflation eats away at fiat currency’s purchasing power. Even though the dollar index has been trading with a bullish bias, the rise in commodity and cryptocurrency prices is proof that all fiat currencies, including the US , are losing value. Governments can issue more fiat legal tender to their heart’s content, but the only way to increase the gold supply is to extract more from the earth’s crust. Meanwhile, countries hold gold as an integral part of their foreign currency reserves, validating the precious metal’s role in the worldwide financial system. Moreover, governments have been net gold buyers over the past years, which continues in 2021.

Barrons had a great analogy about inflation

Gold is an inflation barometer. In the late 1970s and early 1980s, the metal’s price rose to a record high of $875 per ounce on the nearby COMEX futures contract. 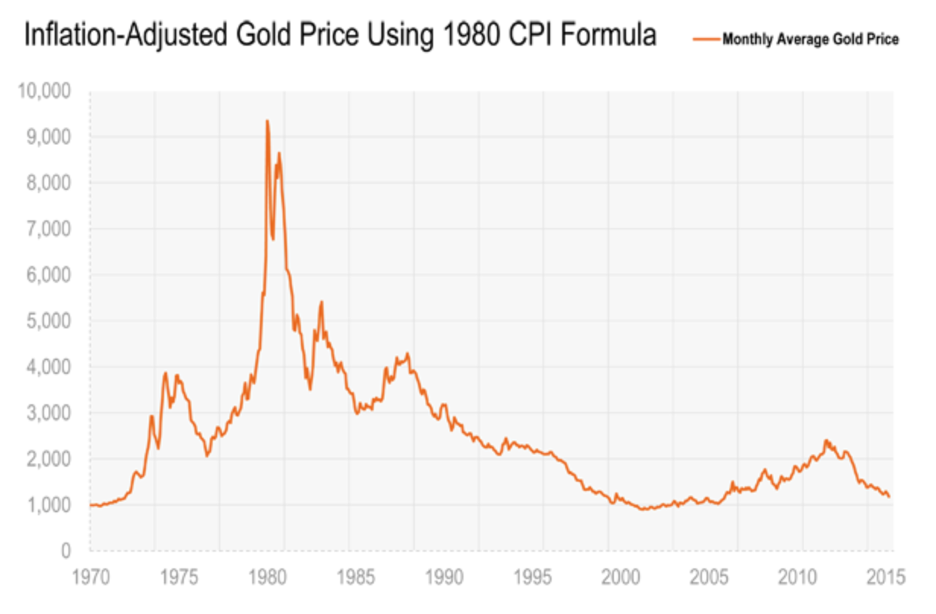 The chart shows that the inflation-adjusted price of gold at the 1980 high was over $9,000 per ounce.

In a recent article in Barrons, the author compared inflation to the dinosaurs that roamed the earth millions of years ago.

“It’s looking like inflation is transitory…in much the same way that dinosaurs were transitory—i.e., stomping around for ages, terrifying all manners of beast, and generally dominating proceedings before disappearing.”

The Fed and US Treasury continue to use the term “transitory,” but they fail to put a time horizon on the term.

Every dip has been a buying opportunity this century

Bull markets tend to experience ugly corrections and consolidation periods before making higher highs. Nearby gold futures ran out of upside steam at $2063 in August 2020 and fell to a low of $1673.30 in March 2021. At the $1790 level on Nov. 3, gold was below the midpoint of the trading range as it trades on either side of $1800 per ounce.

Meanwhile, the longer-term range began in July 2016 when gold reached a high of $1377.50. Gold broke above that high in June 2019, turning the $1377.50 level into long-term technical support. With resistance at $2063, the longer-term midpoint now stands at $1720.25 per ounce. The bottom line is that gold is sitting in limbo, below its short-term midpoint and above the longer-term average price.

A look back at the turn of this century tells us that gold’s trend remains higher.

For more than two decades each significant dip or correction in the gold price has presented a compelling buying opportunity. The chart shows the trend remains long and robust with technical support at the July 2016 $1377.50 high.

Levels to watch in the gold futures arena

Gold has moved into a short-term wedge pattern of lower highs and higher lows, often leading to a break to the up or downside.

Consolidation in the gold market has been frustrating for the most committed bulls as they watch other commodity and cryptocurrency prices soar. However, the sideways trading pattern is a healthy sign for the gold market as it digests the move to a nominal record peak in August 2020. Inflationary pressures suggest that gold will eventually take back the bullish baton in the asset class as the relay race to higher prices looks set to continue over the coming months and years.