Gold Could Be On the Brink Of A Breakout

A dovish European Central Bank propelled gold to a 2-week high and closed on a key resistance level, suggesting bulls are preparing to break gold from its corrective channel. 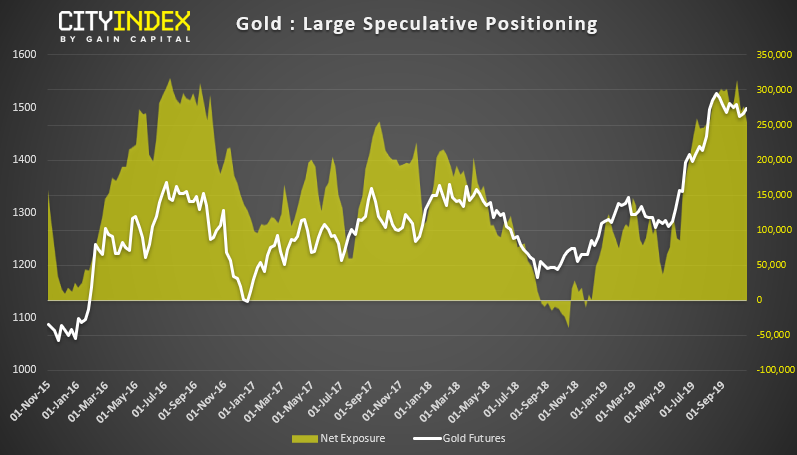 Gold has rallied an impressive 17% this year so far, although at its peak in September it was over 21% higher. Prices have since retraced, provided a failed head and shoulders top and is now carving out a bearish channel. Yet perhaps it has another plan ups its sleeve, given it closed right on the upper trendline after printing a higher low.

A break higher would be a victory for gold bugs, although it’s up for debate as to whether it can break to new YTD highs given net-long exposure has stopped just shy of a record high in late September. Sure, bulls have reduced their exposure by -19k contracts these past three weeks reduce the probability of a sentiment extreme, yet bullish exposure still remains high by historical standards. Therefore, I’m erring on the side of caution to suggest that a breakout from the channel may not necessarily lead to a breakout to new highs. For that, we’d probably need a dovish cut from the Fed next week and for global economic data and trade talks deteriorate further. If that does happen, then hold on as it could well be the beginning of the next leg higher.

Gold Could Be On the Brink Of A Breakout