Gold: Between A Stimulus Rock And The Fed’s Hard Place

As the hours of Wednesday tick by, investors in gold will ruminate again on what got them here, and where they could be heading next.

Just 24 hours ago, everything was looking perky for bulls in both and of the yellow metal, with prices at two week highs above $1,910 at least. Hopes that a new economic stimulus for COVID-19 seemed closer than ever after four months of hand-wringing by both White House negotiators and their Democrat rivals.

Then, like a great avalanche, the hope was undone, in just minutes.

Stocks tumbled, with the , and falling in unison and gold getting dragged along, while the   again took the superior high road as the haven of choice. 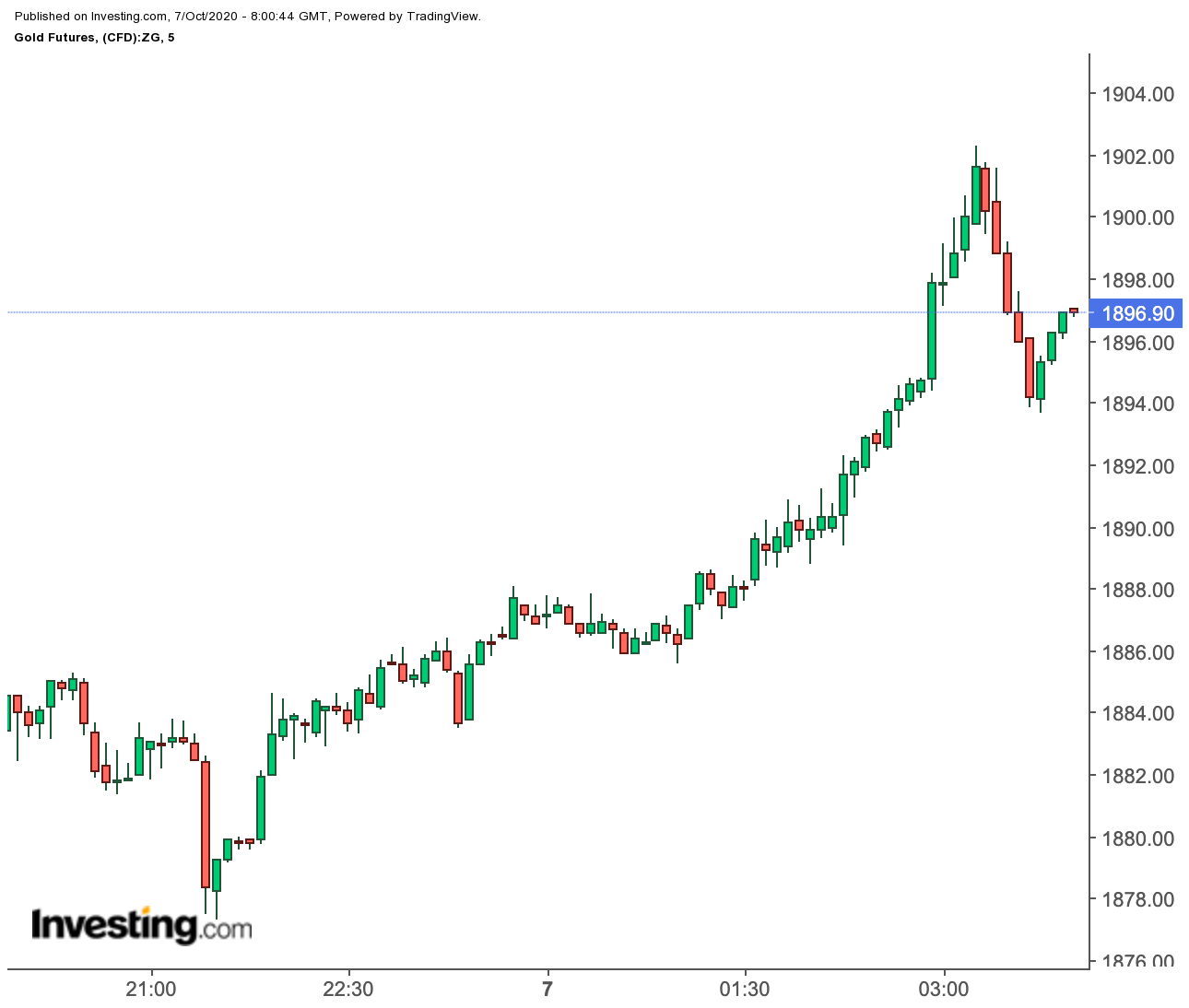 When the dust settled, gold was back under $1,900 and investors had only one source to blame: the same source that had driven the market higher in recent days—President Donald Trump

HIs tweet at 2:48 PM ET on Tuesday killed the “golden goose” of additional stimulus that he had nurtured for risk investors of all stripes since last week.

“I have instructed my representatives to stop negotiating until after the election,”

He blamed House Speaker Nancy Pelosi’s alleged demand for a $2.4 trillion stimulus versus his 1.6-trillion offer as the deal-breaker. Others blamed the tweet on the president’s strong course of medication since the weekend, administered for his coronavirus infection.

Just on Saturday, America’s Commander-in-Chief tweeted from his hospital bed:

“OUR GREAT USA WANTS & NEEDS STIMULUS. WORK TOGETHER AND GET IT DONE. Thank you!”

That makes his current take on the stimulus a 180 degree pivot.

What’s also evident is Trump’s appetite for tweeting is back, notwithstanding his recovery—White House staffers said he was “not out of the woods” yet. His penchant for punching out policy in 280-character bursts only means mudding of the message for investors trying to glean some understanding on whether the stimulus initiative was truly over or could be revived in some way—which has become standard in almost all White House-Democrat battles.

At 9:54 PM ET on Tuesday, the president fired off another missive on Twitter that read:

“The House & Senate should IMMEDIATELY Approve 25 Billion Dollars for Airline Payroll Support, & 135 Billion Dollars for Paycheck Protection Program for Small Business. Both of these will be fully paid for with unused funds from the Cares Act. Have this money. I will sign now!”

That drove equity futures, trading ahead of Wednesday’s open in New York, up again, on hopes that a stimulus deal might still be on. 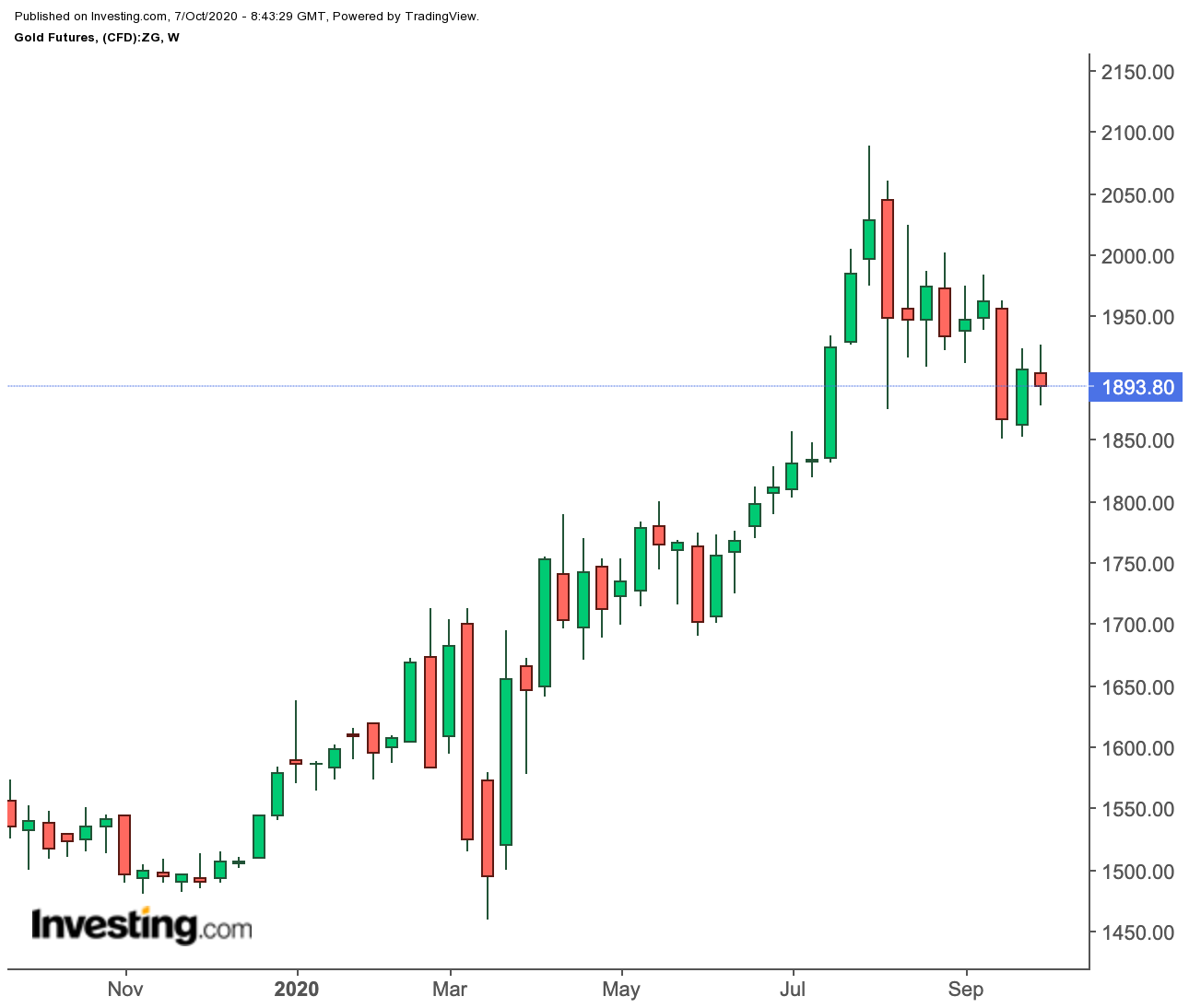 No one other than Trump possibly knows what he will tweet on the stimulus later on Wednesday.

Thousands of Americans, particularly those in the airlines sector, risk losing their jobs without further aid from the government. Trump, who stands for reelection in November, has accused Pelosi of playing political football over the issue. The maintains that any deal should be to the advantage of all American—not just groups and causes picked by Trump, and certainly not for his political expediency.

What’s certain for now is that gold is trapped between the rock of COVID-19 stimulus and the hard place of the Federal Reserve’s September policy meeting due later today.

Each of the last three Fed minutes’ releases have been disastrous for gold but have resulted in a dollar rally. The minutes showed that the central bank remained unequivocal on more asset purchases, which investors had counted on as an alternative to a stimulus.

The Dollar Index, which pits the greenback against six competing currencies, stood at 93.77 early Wednesday. It could return to the strong 94 berth it held to early last week.

Where could gold go if the stimulus remains abandoned?

Gold was battling significant resistance at $1.883, wrote chartist Dhwani Mehta in a blog posted on FX Street. He wrote:

“Failure to hold onto the critical support at $1875, the meeting point of the previous day low … could trigger a sharp drop towards the next relevant downside target of $1860,”

On the flip side, gold could test $1,901 if headlines indicate the possibility of reaching even a partial fiscal deal.

A better assurance by the White House could take down further resistance channels, said Paul Robinson, a gold strategist who blogs on Daily FX.

“If we see resistance rejected, then watch the channel on the 4-hr chart. A triggering of the lower parallel is seen as confirmation that gold is ready to take another leg lower towards the recent low at 1848.”

What will Trump tweet or the Fed say today?