Gold And The U.S. Election: Here’s What To Look For

Jeffrey Gundlach, founder and CEO of hedge fund DoubleLine, told a U.S. pre-election webcast on Monday that gold remains an ideal hedge for inflation, is a “good holding for tail risk ahead” and “will go up very substantially over time.”

What he did not say was for how long a timeframe.

The uncertainty over the outcome to Vote 2020—shaped by polls shifting by the hour and President Donald Trump’s to legally challenge every unfavorable outcome—has made gold a tricky bet.

In Tuesday’s early Asian trade, hovered at $1,893, up 50 cents, or nearly 0.3%—extending Monday’s gain of 0.7%. December gold came within striking distance of $1,900 in the previous session—a level gold bugs had been trying to return to since Oct. 29. 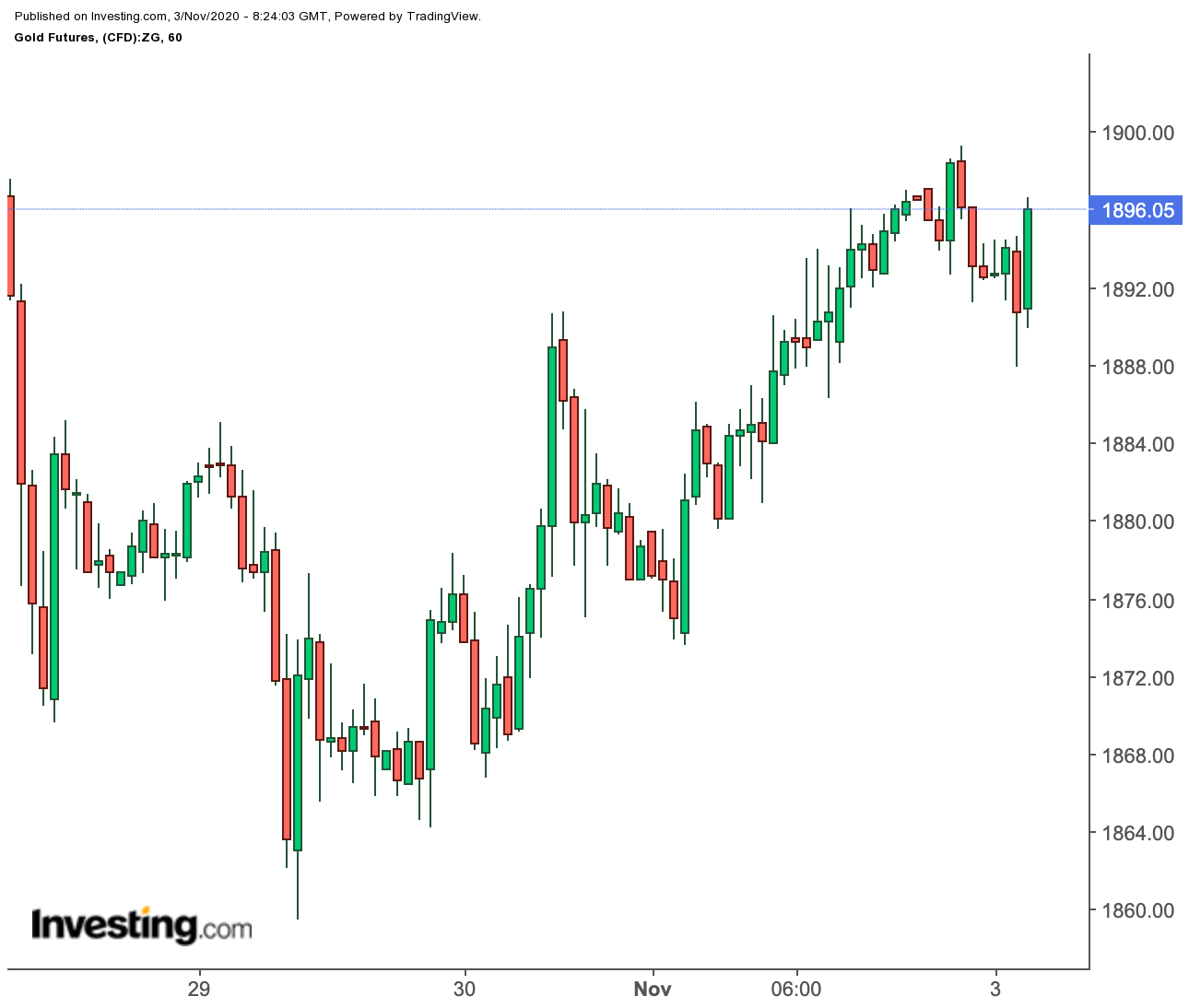 As everyone and their grandmother probably knows, gold is a hedge against both political troubles and fiscal expansion.

But the election to potentially pick the 46th U.S. president or stay with the incumbent has a duality for gold beyond just the choice of candidate. And that can complicate the bet you make.

If challenger Joe Biden wins with a Blue Wave, i.e. taking the White House and the Democrats also win a majority in the House of Representatives and the Senate, his ‘blue’ party would have virtually unimpeded passage for a long overdue new economic stimulus for the U.S. economy.

The same could be said if Trump and his Republican party win an overwhelming victory.

Both candidates have promised to issue a fiscal relief plan as quickly as possible after the election.

If so, gold, acting as an inflation hedge from fiscal expansion, could go through the roof. Similar to the jump between March and August when the House passed the first coronavirus stimulus package and the spot price of the yellow metal gained more than $620 an ounce to reach a record high of just under $2,075.

But without a Blue-wave or an overwhelming victory, easy passage to additional stimulus vanishes, throwing the U.S. financial rescue package back into what could be a months-long game. In such a scenario, gold’s rise will be limited and it could even be hit by significant profit-taking that sees it fall back to mid-$1,800 levels.

The COVID Stimulus And Its Influence On A Gold Rally

For context, Democrats, who control the House, reached agreement in March with the Trump administration and Senate Republicans to pass the Coronavirus Aid, Relief and Economic Security (CARES) stimulus. That package dispensed roughly $3 trillion as paycheck protection for workers, loans and grants for businesses and other personal aid for qualifying citizens and residents.

Since then, the two sides have been locked in a stalemate on a successive relief plan to CARES. The dispute has basically been over the size of the next stimulus as thousands of Americans, particularly those in the airline sector, risk losing their jobs without further aid.

Daniel Moss, a gold chartist blogging on Daily FX, said the yellow metal’s inverse relationship with the could see it slide in the near-term, especially if the election result is delayed or contested—stoking volatility up to the point the winner is announced.

“Although Democratic nominee Joe Biden is holding a significant lead over President Donald Trump in the national polls, his margin has notably narrowed, with the rate of change favouring the Republican incumbent.”

“The probability of a ‘Blue Wave’ scenario…has diminished in recent days, which in turn calls into question the overall size of an additional fiscal stimulus package.”

Moss notes that Wall Street’s index, which leads both gold and the dollar, had also, in the past fortnight, come off its Oct. 12 high of 3,500 hit after opinion polls showed Biden having a double-digit lead over Trump.

Yet, gold would likely continue to fetch a bid as a hedge against political troubles if Trump challenged a tentative Biden victory, Moss said, adding:

“This risk-off reaction could be indicative of a market concerned by the potential of a contested election, considering the Trump administration’s consistent questioning of the mail-in ballot process and the President’s suggestions that the Supreme Court may ultimately decide the winner of the presidency.”

The Fed And BoE Meetings

Right after Tuesday’s election, gold has another cliff-hanger event: the Federal Reserve’s two-day monthly that will culminate with Thursday’s decision on the U.S. interest rate policy. Interestingly, the Fed announcement will be on the same day as the Bank of England’s .

While no surprises are expected from either—with the Fed seen keeping rates at between zero and 0.25%, and BoE at 0.1%—the news conferences held by the central banks’ chiefs could still provide much momentum to the dollar and gold.

Beyond that, gold will move on coronavirus news. An alarming worldwide outbreak of new coronavirus cases has helped to boost gold prices since Friday. and Germany have imposed new lockdowns while will move toward similar restrictions on Thursday.

But a major COVID-19 surge across Europe and the U.S. is also giving rise to concerns over economic pressures pushing gold prices down in response.

“The longer-term view is bullish on expectations that we are going to get a large stimulus deluge from the U.S. which ultimately should weaken the U.S. dollar and send gold higher.”

“But gold traders are worried that these lockdowns could lead to deflationary pressures … gold’s next trade is really for a reflation trade.”

Where Will Gold Go Then?

So, given all these variables, where would gold likely go from Tuesday?

From a technical perspective, according to Moss, the outlook for appears skewed to the downside, as it carves out a “Descending Triangle pattern” just above key psychological support at $1,850.

“The development of the RSI and MACD indicators hint at swelling bearish momentum, with both oscillators tracking firmly below their neutral midpoints.”

“That being said, a rebound back towards the Descending Triangle hypotenuse and trend-defining 50-day moving average ($1,901.68) could be on the cards, if buyers can overcome resistance at the 100-Daily Moving Average ($1,890.71).”

Moss also said that a daily close above the October high of $1,933.28 is needed to invalidate the bearish chart pattern and carve a path to test the spot gold’s September high of $1,992.63.

“Conversely, a break and close below the September low (1880.91)) would probably ignite an impulsive downside push back towards the psychologically imposing 1800 mark and bring the sentiment-defining 200-DMA (1785.09) into play.”

Investing.com’s own Daily Technical Indicator has a “Sell” Recommendation on spot gold, projecting support as low as $1,857.59.

Democrats are in position to ‘take a ...