Gold After Russia’s Exit: Is It The Calm Before The Storm?

First they did it to . Next, they might do it to gold.

Russia’s often underestimated strength as a global economic influencer is beginning to dawn on some investors as partly because of Moscow’s refusal to play by Saudi production cut rules.

While it can be argued that the worst demand collapse in oil’s history is due more to the coronavirus pandemic and Riyadh’s ill-timed production hikes than Russia’s exit from the OPEC+ pact, the Kremlin has now withdrawn from all bullion buying — giving investors in gold a chance to discover how influential or otherwise it is to the yellow metal’s prices. 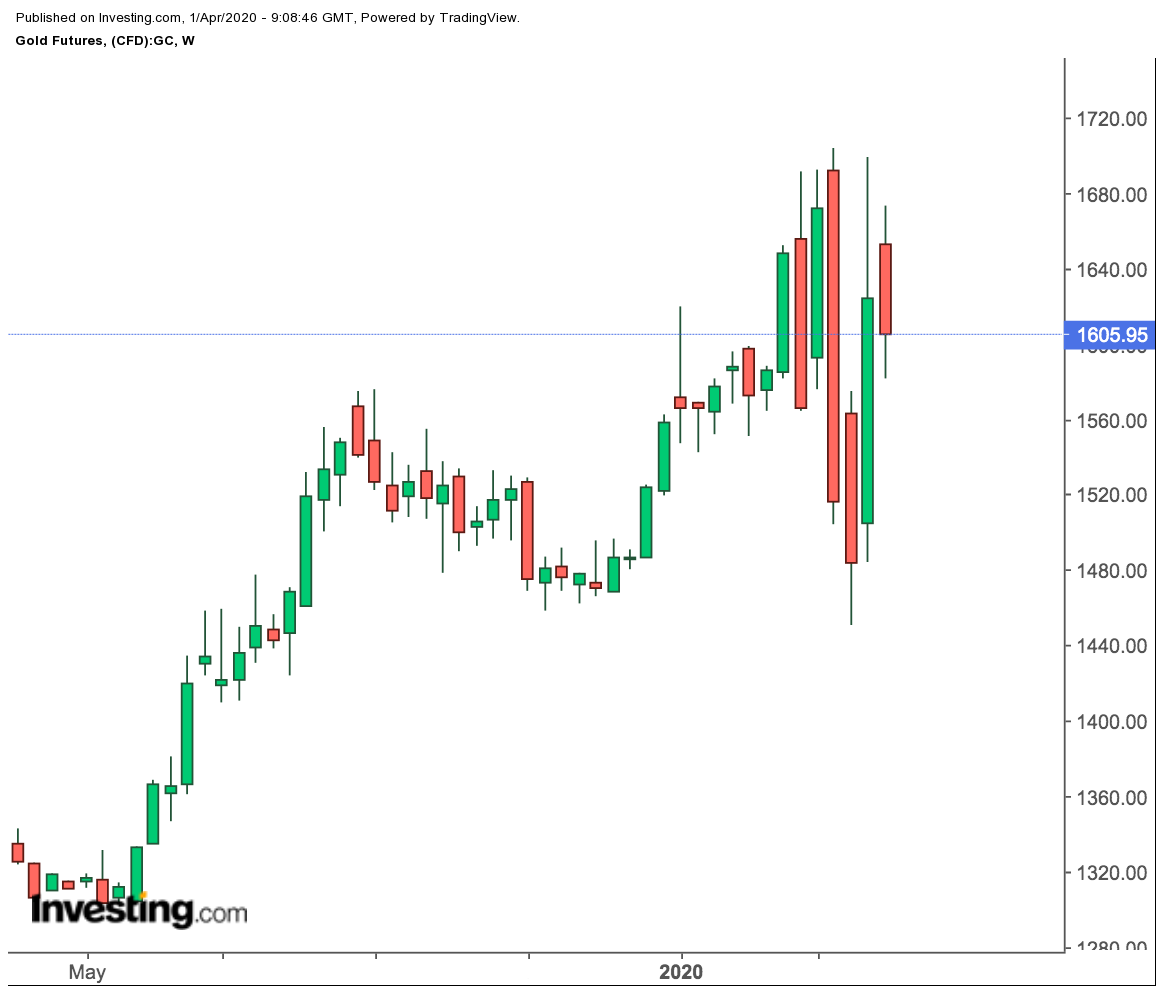 After amassing over $40 billion in bullion holdings over the past five years, Russia has called it quits, presumably because of the strain to its budget caused by current low oil prices.

Bloomberg, which reported the story on Tuesday, said the decision was announced by Russia’s central bank as taking effect from today, April 1, although there was no explanation for the move. Analysts filled the void, saying Russia already has a lot of gold stashed in reserves and likely didn’t need more.

From Relentless Buying to Sudden Stop

Bloomberg added that Russia’s relentless gold buying in recent years has been a key pillar of support for the market, putting a floor under prices as investors ditched safe havens and bought riskier, higher-yielding assets. It said the bullion stockpile held by Bank Rossii, as the central bank in Moscow is known, is reportedly valued at about $120 billion — or weighing some 75 million ounces at today’s market price of around $1,600 an ounce.

China’s central bank, often in the news for supposedly being the world’s largest gold hoarder, was reported to have 62.64 million ounces in its cache six months ago. Presuming both reports were true, and that the People’s Bank of China had bought more bullion before the start of the COVID-19 pandemic and not liquidated much, then the two central banks were probably holding about the same amount of gold.

Now, here’s the clincher: what if either start dumping a good portion of that gold in coming months to tide them through the global recession anticipated from the pandemic? While Russia’s fiscal deficit to its 2020 GDP is expected to be at around 1.5% versus China’s 3.5%, Moscow’s economy is more oil-dependent compared to China’s amazingly-diversified economy. In a crunch, it doesn’t take much to figure out which central bank will be selling more gold.

So far Russia’s decision to halt bullion buying has barely impacted gold prices, which have enjoyed further wind lately after Wall Street’s most influential voice in commodities, Goldman Sachs, recommended the yellow metal as a “currency of last resort”. 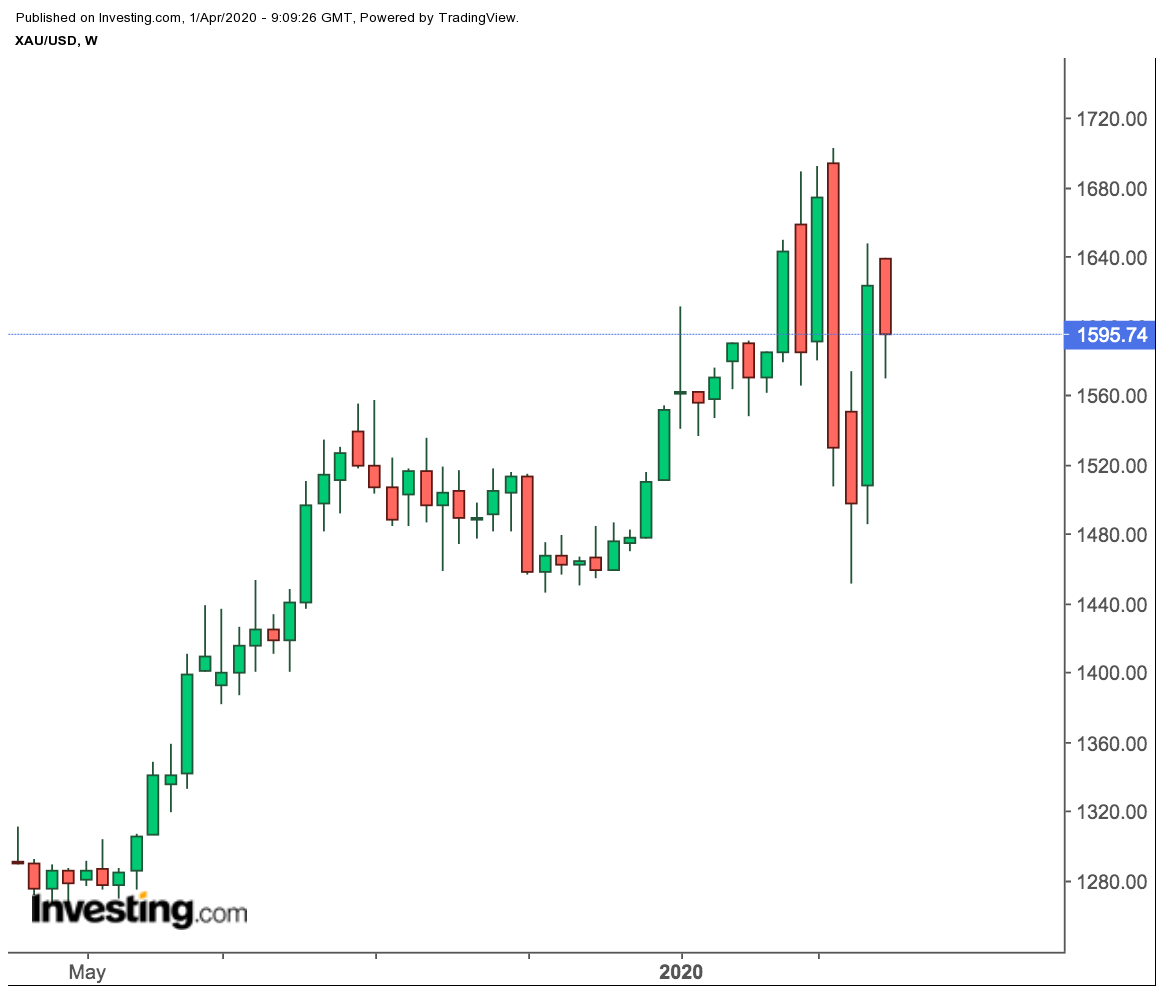 For the month, bullion lost nearly 1% but for the quarter; it jumped 5% — its sixth straight quarterly win. Gold futures gained 2% in March and also about 5% for the quarter.

The bullish setting for gold may be the calm before the storm that hits those thinking that gold would stay at its current $1,500-$1,600 perch.

“Russia pulling back on gold is a big deal,” said Michael Norman, a former Credit Suisse trader and gold market veteran who has since founded New York-based Mike Norman Economics. “It certainly necessitates, I think, a pretty significant correction in the gold price to discount one of the biggest buyers in the world pulling out of the market.”

Norman said he exited from his gold positions before Tuesday’s selling accelerated, pushing both bullion and futures beneath the $1,600 level. He expects a deeper slide hereon.

Bloomberg alluded to a likely downdraft in gold prices as well in its Tuesday story about the Russian withdrawal from the market.

With the market not too far from the seven-year high of $1,700 hit in early March, Russian dealers were probably eager to sell, it noted. Despite its strong quarterly gain, gold has acted more like a risk asset than a safe haven lately, often tumbling as investors liquidated their holdings in the yellow metal to raise cash for margin trades and losses in equities and elsewhere.

“The central bank is now signaling to gold sellers that they should redirect their supplies externally,” Dmitry Dolgin, ING Bank’s chief economist in Russia, was quoted saying by Bloomberg. “Global demand seems to be high.”

While the demand will make it easy for Bank Rossii to find buyers for its gold bars, the central bank is still likely to prioritize expediency over price to fund Moscow’s distressed budget — meaning its sales may not necessarily lift the market.

One thing that could run in gold’s favor in the near-term is the Federal Reserve’s move on Tuesday to set up a temporary repurchase facility for foreign and international monetary authorities that will flood the credit markets with more dollars. A higher dollar supply is positive for gold, which is a contrarian trade to the greenback.

“We saw the come down from almost 103 yesterday, into the 98 handle, after the Fed’s announcement,” said Norman. “We’ll have to see how effective that measure will be to tamp the dollar down and push gold higher.”

“Maintaining any rallies above $1,650 remains challenging,” Halley said. “That is a wide but real range, such are the times we are living in.”

The Russians could show us, in the coming months, where gold’s range will be.

Trump blames WHO for getting coronavirus pandemic ...