U.S. investors swarmed into sovereign debt and fled the volatility of stock markets on Thursday after Europe’s central bank cut its GDP forecast, rekindling fears that a slowdown overseas could send shock waves into the American economy.

10-year German bund was cut in half from 13 basis points to about 6.5 basis points, while rates on Italian debt fell as much as 19 basis points.

The yield on the 10-year U.S. Treasury, which has tended to mimic recent moves in German bunds, fell 4 basis points.

But where the ECB took investors mostly by surprise was in its decision to announce a new round of stimulus and push back its timeline for future rate hikes “at least through the end of 2019.” It also lowered its inflation projection to 1.2 percent, well below its target rate of just under 2 percent.

ECB President Mario Draghi didn’t try to sugarcoat the situation either, telling reporters Thursday morning that “the weakening in economic data points to a sizable moderation in the pace of the economic expansion that will extend into the current year.”

U.S. stocks, which have outperformed their overseas peers for years, swooned amid the ECB headlines. Both the S&P 500 and the Dow Jones Industrial Average fell more than 1 percent following the forecast cut, putting American stocks on track for their worst week of the year.

“While it was no surprise to us, the ECB has finally recognized how sick their economy is,” said Andrew Brenner of National Alliance. “Equities have finally woken up to the fact that the reason the Fed is on hold is because of the awful outlook of the global economies.”

Unlike peers, Europe has used the ECB’s easy monetary policy as a crutch to boost growth since the financial crisis. The U.S. Federal Reserve, in contrast, has hiked rates several times over the past few years as the American economy collected itself in the aftermath of the recession. The Fed raised its overnight lending rate 25 basis points in December and has reduced the size of its massive balance sheet of mortgage-backed securities and U.S. debt.

U.S. economic growth has thus far remained insulated from international economic turmoil in China and Europe, posting a gain of 2.6 percent in the fourth quarter of 2018. That’s given U.S. economists some comfort that the Fed could move to lower borrowing costs in the future if the largest economy in the world faces another downturn. 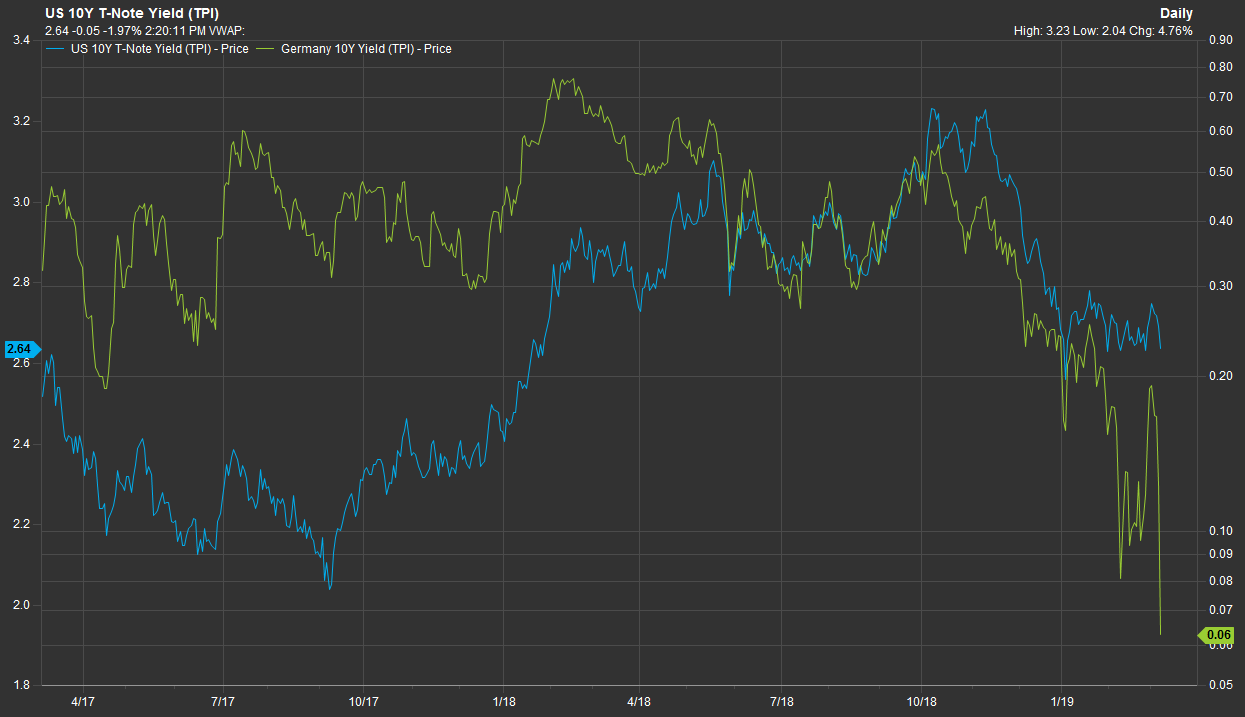 “I think what’s interesting is that Treasurys are keeping up with [European debt]. Even with trade war fears subsiding, global growth is becoming a bigger factor,” said Priya Misra, head of global rates strategy at TD Securities.

“They didn’t leave anything in their back pocket,” Misra added. “If I’m the ECB, I’m really hoping today is enough to provide a floor.”

The ECB’s decision to introduce a new series of long-term refinancing operations will offer cheap loans to euro area banks. The so-called TLTROs are aimed to create better credit conditions for customers, which in turn helps drive Europe’s economy.

Some, like Italian economist and Bocconi University Professor Tommaso Monacelli, argued that Europe’s continued need for the type of support seen throughout the financial crisis is a troubling sign for Europe’s economy.

“In a nutshell, the TLTRO III decision signals very strongly that the ECB has bleak forecasts on the evolution of the economy in 2019-20,” Monacelli wrote in an email.

The announced TLTRO III will be the third injection of stimulus of this kind from the ECB. But barring the new stimulus, ECB President Mario Draghi said in a press conference that risks to the economy remain.

“More generally, it is obvious that a slowdown of growth is coming with ECB interest rates still at zero,” Monacelli added. That “will put a disproportionate share of the required stimulus on the array of unconventional measures, such as forward guidance and TLTRO, whose effectiveness at stimulating economic activity is very doubtful.”

US tech firms fear China could be ...