G-20 finance leaders said in a joint communique Sunday that trade and geopolitical tensions have “intensified” but vowed to protect global growth amid the trade war between the United States and China.

Finance ministers and central bank chiefs from the Group of 20 major economies met Sunday in Japan and indicated rising trade tensions between the U.S. and China was the main concern. The meeting comes just weeks before world leaders, including President Trump and Chinese President Xi Jinping, head to Osaka, Japan, for the G-20 summit.

“Global growth appears to be stabilizing, and is generally projected to pick up moderately later this year and into 2020,” the G20 finance leaders said in the communique. “However, growth remains low and risks remain tilted to the downside. Most importantly, trade and geopolitical tensions have intensified. We will continue to address these risks, and stand ready to take further action.”

Trade negotiations have since stalled after Trump increased tariffs on $200 billion worth of Chinese imports to 25 percent last month. China responded to Trump’s tariffs by increasing tariffs on $60 billion worth of American products. Beijing also blamed the U.S. for the trade war and accused Washington of being an untrustworthy negotiator while threatening to cut off the supply of rare earth minerals that are widely used in electric cars and mobile phones. 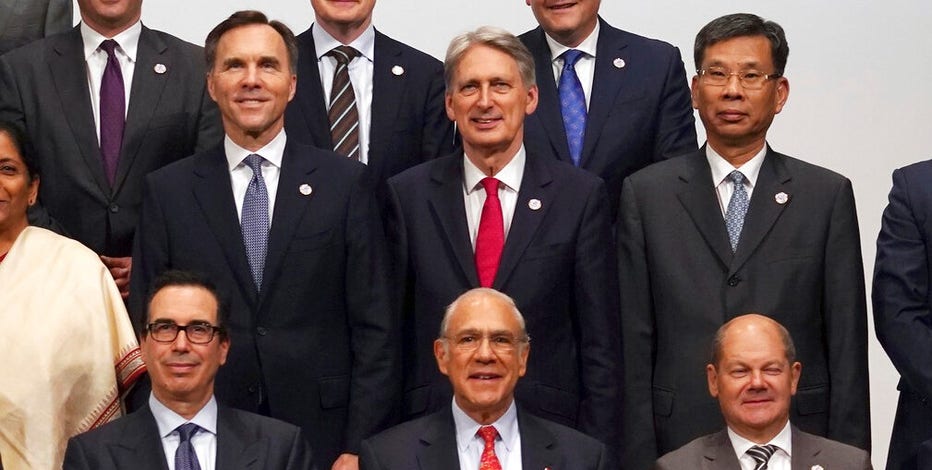 On Sunday, U.S. Treasury Secretary Steven Mnuchin met with China’s central bank Gov. Yi Gang. He tweeted a photo of the two shaking hands and said they had a “candid discussion on trade issues,” but provided no further details.

“Had constructive meeting with PBOC Governor Yi Gang, during which we had a candid discussion on trade issues,” Mnuchin wrote on Twitter.

Mnuchin told reporters that he expected that any major progress to resolve the trade war will come during Trump and Xi’s meeting at the G-20 summit in late June. The Treasury secretary added that Trump hasn’t decided if he will impose the additional tariffs he mentioned Thursday.

Those duties would be on top of tariffs of up to 25 percent on $250 billion in Chinese goods. Together they would encompass almost everything China exports to the U.S.