For Gold Bugs, This Rally Isn’t A Rush, But One Long Coming

They’ve seen many years of false starts, but gold bugs probably can’t be surer than now of the rally in the shiny metal.

Sought in both good times—think jewelry and other ornamental use—and bad—as a safe haven against economic and political troubles—gold is enjoying its best year since hitting record highs eight years ago. 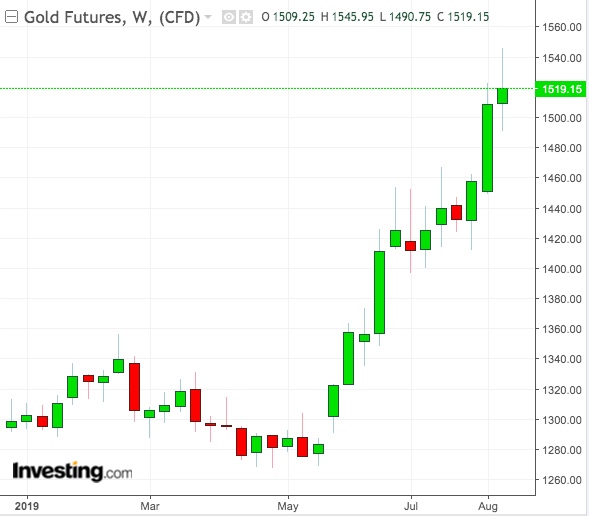 Hovering at six-year highs above $1,530 per ounce, the benchmark contract on New York Mercantile Exchange’s Comex is up 17% year-to-date, matching returns from 2011—the year it set its all-time peak of $1,911.60.

Since the start of August, gold has gained over 8%, or more than $100, amid sustained buying by central banks responding to heightened trade tensions, a slew of disappointing global economic data and, most recently, an inversion of the U.S. yield curve, which flags a recession.

Aside from buying by monetary authorities, the rally in gold has been fired by speculative support lent by hedge funds and indirect buying via exchange-traded gold funds.

As a result, both Comex’s benchmark contract and , which are reflective of the moves in bullion, are poised for a third consecutive week of gains and the 11th advance in the past 13 weeks.

A Rally Backed By Both Strong Fundamentals And Technicals

The strong fundamentals for gold and relative price action has fed into gold’s technicals.The Relative Strength Indicator for Comex’s benchmark contract now has momentum at the highest reading since the 2011 peak.

So, what do all these mean for the future highs in gold?

Some strategists, including Christopher Vecchio, a currency analyst who also plots precious metals strategies, see gold as having its best shot now to retrace its glorious path of eight years ago. Vecchio has a top-end target of $1,820, which if Comex takes out, could set the stage for the metal to match its current record, or even write a new one.

Investing.com puts Comex gold as a “Strong Buy” on its Daily Technical Outlook, projecting a top-end resistance of $1,599.24 in the near-term.

In a precious metals note issued this week, Bank of America Merrill Lynch (NYSE:) said central bank could still have a lot of buying left to do in gold.

“We acknowledge that the paper market is very long, but we note at the same time that investor gold holdings excluding central banks, measured as a percentage of global equity markets still remain well below the levels seen in the 70s: then, gold holdings were equivalent to more than 6% of equity market cap, while this number is now less than half that at 2.7%.

“A gold allocation of just below 5% maximizes the risk-return profile of a conservative portfolio. We estimate the gold holdings at 12% of central banks are below that threshold. If all those monetary authorities lifted their allocations to optimal levels, this would generate an impressive 5,870 tonnes of additional gold demand, compared to last year’s combined mine and scrap supply of 4,600 tonnes.

“Putting it together: record long futures markets raise the risk of a short-term pullback in prices, but there is scope for further gold purchases by investors and central banks going forward.”

Others are less ambitious.

After daily rises of up to 2% or more in recent weeks, gold’s ascend on recession fears has also slowed lately, with investors awaiting cues of more central bank easing, particularly from the Federal Reserve, before committing to more long positions.

That has prompted technical strategists such as Michael Boutros to have less lofty targets despite staying bullish on the precious metal.

In a note on spot gold’s technicals, Boutros remarked:

“The gold breakout is testing major confluence resistance up here.

“Watch the weekly close: the risk for a near-term pullback/correction mounts if we settle below $1,526. From a trading standpoint, it is a good place to reduce long-exposure/raise protective stops – be on the lookout for possible exhaustion.”

However, the analyst also cautioned that there could be an exponential rally if resistance targets of $1,558 and $1,568 are breached:

“Look for a bigger reaction there if these are reached.”

House Dems could retaliate against US and ...