According to popular winter lore, the higher the squirrel builds its nest before Christmas, the colder it’ll be. Weatherman John Belski says he spotted squirrels nests at record heights in Louisville, Kentucky early this month, suggesting frigid days ahead. How natural gas bulls would wish he was right.

From early forecasts of super cold in the East Coast and other U.S. regions that use gas as the primary heating fuel, readings now show moderate chill at best — significantly diminishing the fortunes of those who bet big bucks on gas prices going stratospheric in their first major pre-winter breakout.

Gas did rally beyond the expectations of many over the past month. But it did not stay higher, and we can blame the weather for that.

More Than A Third Of Early Winter Rally Wiped Out 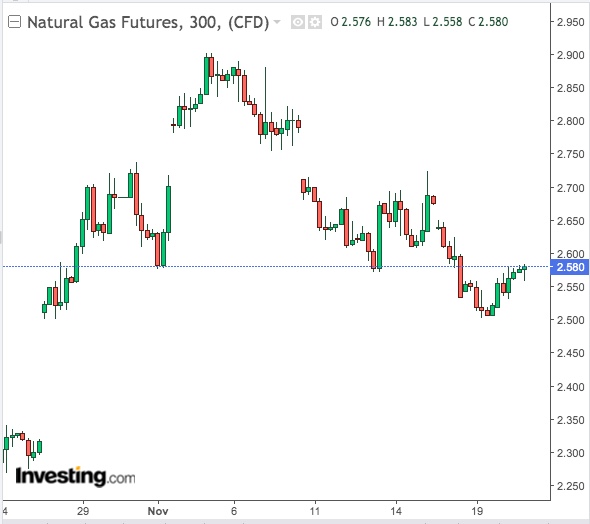 At Wednesday’s settlement, the for gas on the New York Mercantile Exchange’s Henry Hub settled at $2.56 per million metric British thermal units. That was a staggering 35 cent drop from the eight-and-a-half month highs of $2.91 per mmBtu hit on Nov. 5.

In just two weeks, bulls in the market have had to give back more than a third of the 21% bounty they had built between the closing week of October and the first week of this month.

And there could be more pain for traders staying long, say those parsing both the latest winter readings and technical price charts.

“I thought $2.50 was the first level to get to. I still think that the spreads are going to weaken in 2020 with Q1 possibly flat to summer, which suggests that the eventual price is closer to $2.30.”

Dan Myers, analyst at Houston-based gas risk consultancy Gelber & Associates, notes that gas for both April and May 2020 are already trading below $2.30 on expectations that the current oversupply in the fuel will push into next year.

But like in the case of the December contract, the market is still hesitant to completely discount the remaining winter months through March, says Myers.

However, that doesn’t mean it is poised for another major rally either, he says.

“Given the oversupply in the market at normal temps, a moderately cold to normal period isn’t enough to sustain elevated prices.”

Betting on something as fickle as the weather is never an easy thing, but that’s what the heating-and-chilling game of gas is all about.

Traders surprised by the turn in the temperature over the past two weeks would probably wish the squirrels in Kentucky had been as accurate as the monkeys that beat Wall Street traders by picking the right stocks. Considering how the stock market has performed all year, the human cousins of those primates can be considered a lot luckier, but that’s another story altogether.

Back to the weather situation in gas, the pricing dilemma for the trade comes ahead of the first that the U.S. Energy Information Administration is expected to report today.

First Draw Of This Winter Could Be A Non-Event

A consensus of analysts polled by Investing.com shows the EIA could cite a withdrawal of 89 billion cubic feet for last week versus the previous week’s build of 3 bcf.

In the normal scheme of things, that should have been enough to please the bulls.

But not now, amid questionable demand for heating and unrelenting record highs in production week after week, says Myers.

“There is potential for last week’s demand to push an even stronger (storage) pull near triple-digits.”

“Though this won’t quite match last year’s mid-November pull, it could come in nearly three times the size of the five-year average.”

“Nevertheless, the reversal to mild weather late this month will tamp down” the market, he adds.

Dominick Chirichella, director of risk and trading at the Energy Management Institute, says temperatures will be below normal in Western United States, with a potential for significant cold anomalies, especially in the northern Rockies/Great Basin.

But above-normal readings are anticipated in the South Central/Southeast U.S. and more seasonable conditions are forecast across the North Central and Northeast, he says.

“Confidence remains low during this time period, with a bit of model disagreement and poor run-to-run continuity, even among ensembles. Additional shifts in the forecast are likely as we get closer.”