When you have any concerns about your health, you listen to your doctor. And “Dr. Copper” is telling the bulls their investment is still fine, as global markets lean toward Wall Street’s comeback from Thursday’s carnage.

— used in electrics and electronics, and in anything from motor works and construction, to industrial machinery such as heat exchangers — has had quite the rally in the last three months. The price is up nearly 7% so far this month, bringing gains since March to 32% Even , for all its bullish headlines over the past six weeks, is still showing a loss of 45% so far this year, compared to just 6.5% in copper.

On a weekly basis, copper could wrap a straight fourth week of gains, if investors buy the dips in the price today, instead of trying to extend the previous session’s declines. 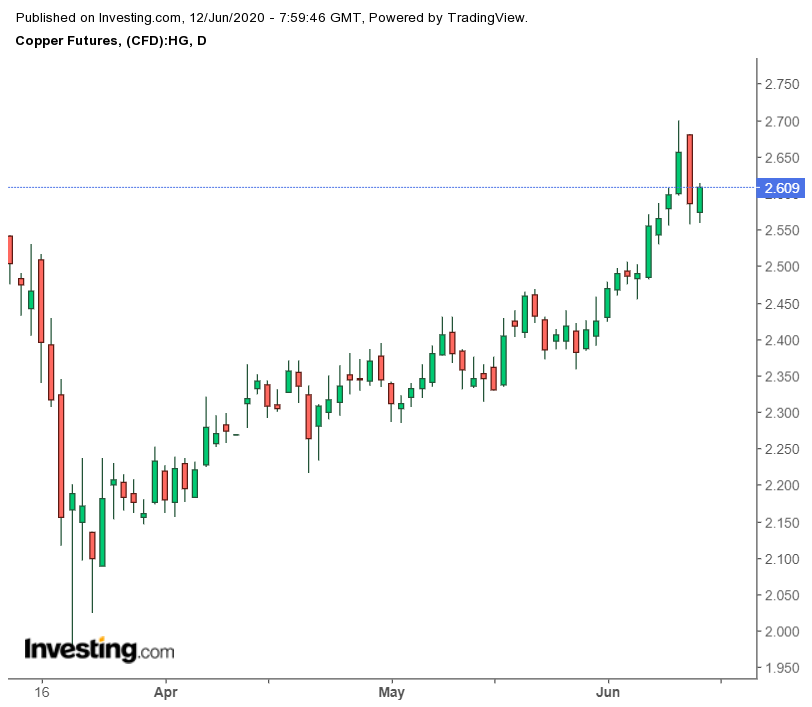 Copper Up For Month And Week, Down On Year

COMEX copper futures witnessed their largest fall in over 8 years in March, dropping by nearly 13%, as the world economy began going into lockdown to stop the spread of COVID-19. On the London Metal Exchange, are down by 6% so far this year, despite businesses in most countries having reopened, albeit with limitations.

In a perfect world, anyone who studies copper well enough should be able to foretell an oncoming boom or recession. This assumed diagnostic capabilityis what has earned copper its “Dr.” title. Yet, even before the onset of coronavirus, the world was hardly perfect. And the pandemic has now redefined almost everything we previously knew as normal.

Thus, copper’s been in its own universe, rallying when the world economy was tanking. Copper owes much its upside to output disruptions caused by mine closures and other supply outages.

As of Friday, there was no sign of these abating, meaning the rally could continue, as fears of a second coronavirus wave in the United States and Germany set in. At least five U.S. states — New Mexico, Oregon, Florida, Texas, and Arizona — saw a jump in infections this week, after five weeks of declines across the 50 states. In Germany, the virus’ transmission R-rate climbed above 1, meaning the disease could once again start to spread out of control. New cases have also appeared in Asia.

The potential for a U.S. Lockdown 2.0 — or at least a partial one — along with Federal Reserve Chair Jay Powell’s assessment that US growth could suffer another two years from the pandemic — were what drove Wall Street to its worst daily loss in three months on Thursday. Copper was ensnared as well in the risk-off move across markets.

Wall Street Might Not Be A Drag on Copper

Even so, the crash in stocks might fix itself pretty soon, says Bespoke Investment Group. It said declines of such magnitude — that brought the down 8% — have historically been followed by sizable rebounds in the days, weeks and months to follow. The was on track to open at least 1% higher, according to the futures market.

If the stock market does not continue to act as a drag on copper, then what’s the near-term prospect for the price?

Goldman Sachs, whose counsel on commodities is closely followed on Wall Street, significantly raised its price expectations for copper in a note issued to the firm’s clients earlier this week.

“In our view, the key driver behind this rebound has been the outperformance of Chinese demand that benefitted from both the construction and infrastructure policies discussed above.”

“We now expect annualized Chinese copper demand to increase 1.5% year-on-year versus the 2% contraction we envisioned before, which implies a 500,000-tonne upward revision to our demand estimates.”

Also in China, auto sales in May gained for a second consecutive month, while broader credit growth quickened, as the world’s second largest economy regained its footing.

Not all have a rosy outlook for copper though.

Bloomberg, in an analysis, said the shape of China’s stimulus and recovery offers one reason for caution, as the effects of pent-up demand begin to fade.

ING analyst Wenyu Yao cites technical complications, saying there was an element of “irrational sentiment” as the copper rally was originally premised on hopes for a V-shaped economic recovery, which was not yet evident in data.

But even if the economic bet on copper begins to chip away, COVID-19 related pressures on output could continue supporting the market.

Unionized workers at Chile’s top copper miner Codelco said on Thursday they were considering walking off the job at some sites to implement a self-imposed quarantine after a member died from the virus.

Chile, the world’s largest copper producer, is in the throes of a major COVID-19 outbreak, with new cases cresting at 5,000 a day and deaths from the disease surpassing 2,000.

Output at Chilean copper mines has largely gone unscathed though. But the Federation of Copper Workers has warned that there were “alarming” numbers of coronavirus infections at several of the country’s mines and that measures to tame the outbreak were insufficient.

* Disclaimer: Barani Krishnan does not own or hold a position in the commodities or securities he writes about.