Dr. Copper Might Be Sick Long After The Coronavirus Is Gone

It’s the only commodity given the “doctor” tag for its ability to tell if all things economic will get better or worse. And true to the faith bestowed upon it, Dr. Copper might be sick long after other commodities rebound from the impact of the coronavirus, reinforcing its role as the seer of all that ails the economy.

The red metal was one of the most gutted raw materials this week as the globe’s latest health scare sparked risk aversion from Beijing to New York to Wellington.

In Wednesday’s trade, copper futures were up less than 1% in and trade, emerging from a 10-day rout — its worst losing streak in six years — that wiped almost 10% off its value. 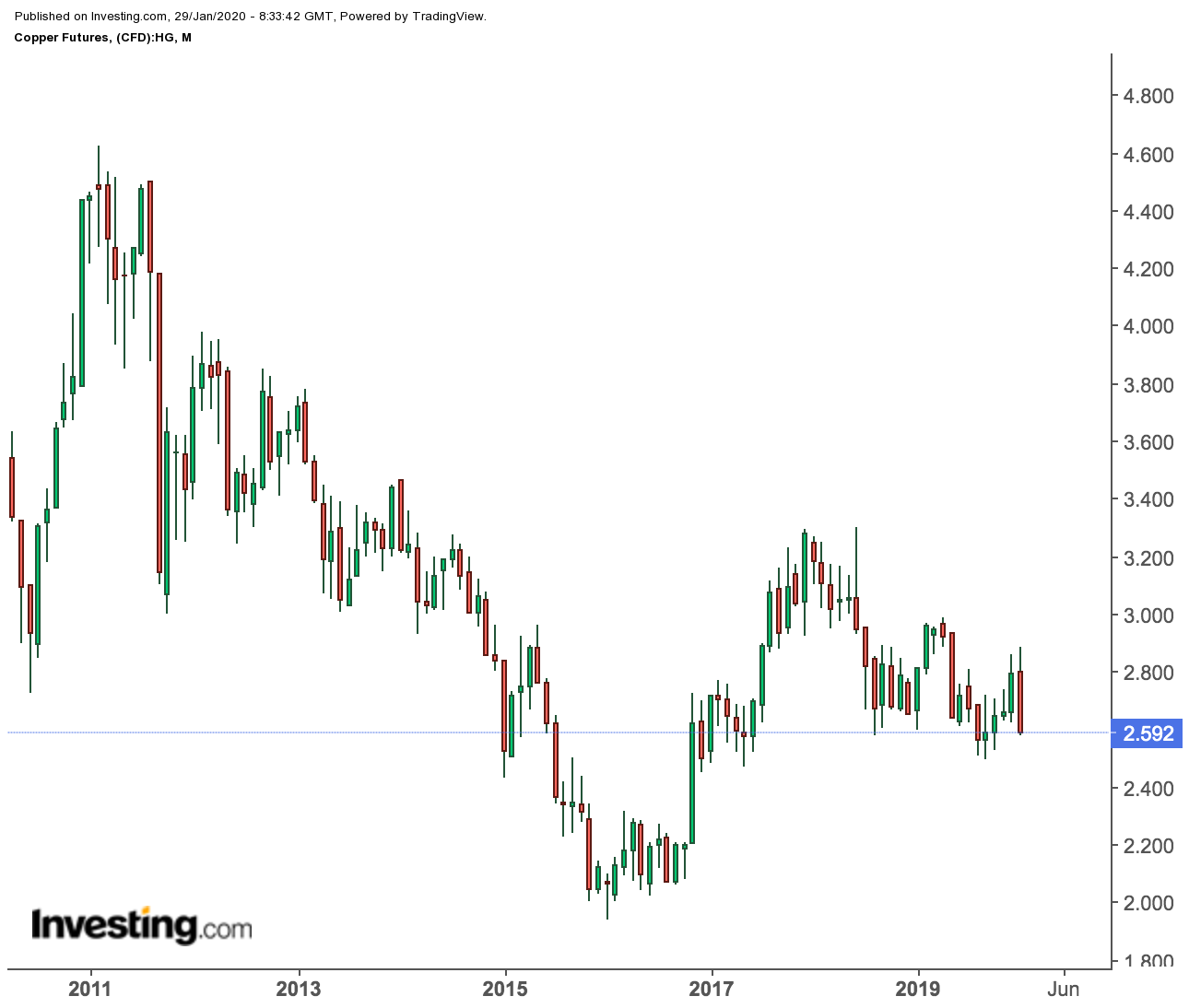 Oil: The Only Commodity With Comparable Losses To Copper

The only commodity with comparable losses recently was crude oil. Crude futures fell 11% in futures trade last week and more than 9% in .

Analysts say oil could suffer hundreds of thousands of barrels in lost consumption from the coronavirus that has brought China’s travel and many other businesses to a virtual standstill, before spreading to 15 other countries.

But oil is also a commodity that has seen meteoric rises in the past, often when the fog is lifted from a crisis. Not copper though.

Canadian bank-backed broker TD Securities, which finds the red metal attractive at its current prices, said on Wednesday it was still cautious about a purchase as another round of coronavirus-related selling could “easily send prices significantly below these levels.” It added:

“Copper markets are relatively illiquid as they are now.”

Timothy Wood-Dow, analyst at BMO Capital, another metals-focused Canadian group, said with China accounting for about 50% of all industrial metals demand, the existential threat of the coronavirus “is very concerning …. and feeding through to the (copper) market.”

From Hero To Zero In Two Decades: Copper

In a span of just two decades, copper, as the world’s leading industrial metal, had gone from hero to zero.

It wasn’t always like this with the red metal.

In the prior decade, New York-traded copper started January 2000 at just 86 cents a lb. But by December 2009, it was up by a whopping 287%, breaching the $3 level. Clearly, copper in that era wasn’t just reflecting the economy — it was front-running it.

So, why the disconnect since?

One reason is the latter half of this decade has been filled with fears of a global economic slowdown — which although they haven’t panned out, have put a cap on copper prices. The Trump administration’s trade war with China, for instance, has been one of the biggest obstacles to higher copper prices.

Financial Times columnist John Dizard said in an October post that copper “tried, feebly, to get out of its sickbed at the end of the summer, only to fall back again after the middle of September.”

Jeffrey Christian, a renowned consultant in the global metals industry, points to another problem: a dearth of new mining and exploration.

“No one wants mining, but they want the product,” said Christian, speaking from his 33 years of experience in running the CPM Group, a metals statistical and advisory services company.

A mining “fix” will require higher copper prices, say other analysts, who point to the army of workers who would be needed to excavate mines, pour low-carbon cement, build roads and railways, construct beneficiation plants and refineries and monitor waste disposal.

“We are working on three continents with governments and industry associations to see what can be done about [the lack of new mine investment]. Now institutional and retail investors are simply not investing in junior mining companies, because they have lost money at it for so long.”

Paul Gait at Bernstein in London estimates that copper needs to be priced at $8,800 per tonne to provide the so-called mining fix. London copper futures, hovering at $5,740 a tonne on Wednesday, are at least 35% off that mark.