Does The Coronavirus Leave Anywhere To Hide? Sugar Provides Shield And Gains

To the average investor, being long any commodity other than gold might seem suicidal now, with the coronavirus appearing to have “infected’ almost every raw material from oil to and the that China buys in such abundance.

Yet, in the sea of red drowning the commodities complex, a few flickers of green continue to provide hope for longs. One of them is in sugar.

on the ICE (NYSE:) Futures U.S. was poised for a third week of gains out of four on Friday, after hitting a high in the previous session that fell just short of the two-year peaks struck last week. Assuming there’s no slide on the day, the sweetener could finish the week up 1.5%.

Sugar Up Most For Month Since 2018, Oil In Reverse

But more importantly, with today being the final session of January, raw sugar is also showing a gain of nearly 9% on the month. If it closes again in the positive, it could have the highest monthly gain since October 2018’s astronomical gain of nearly 27%. 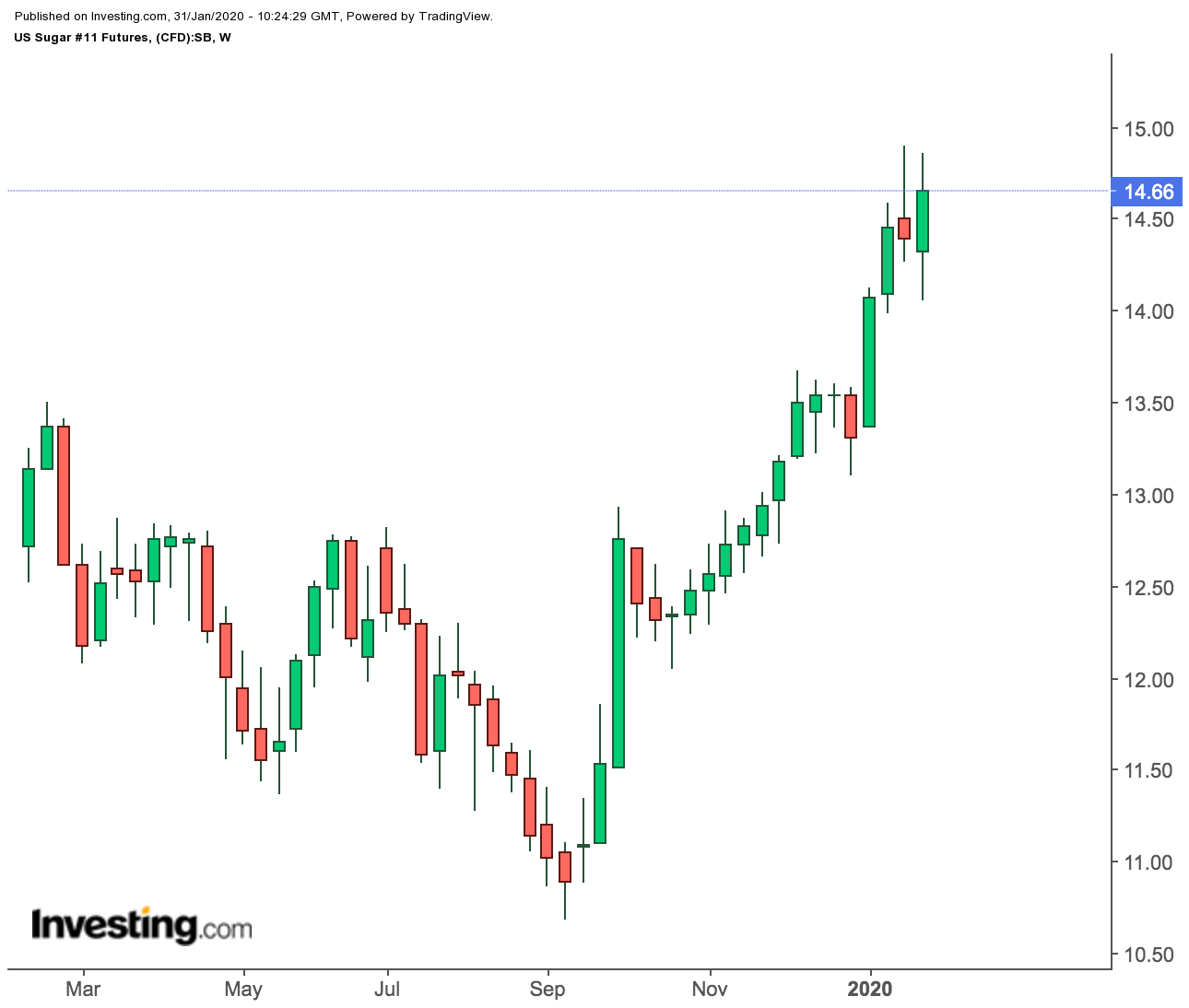 Now compare that January gain in sugar with how oil has performed for the month. Oil’s benchmark is poised for a loss of more than 12% on month, its deepest slide since November 2018.

And it makes sense to compare sugar with oil because sugar’s most important commercial by-product is ethanol — the biofuel that’s blended with gasoline, or petroleum.

Sugar Is Just Among A Handful Of Commodities With Monthly Gains

In fact, sugar is one of five leading commodities from a field of 36 that are showing gains for January, Investing.com data shows. The winners other than precious metals and are , and .

Typically, sugar prices track those of oil given their dependence on gasoline for ethanol blending — which is mandated at 10% in the United States.

But since the coronavirus outbreak, sugar has strangely been marching to its own drum-beat, as traders and investors focus almost entirely on a supply squeeze forced by a weak crop out of top producer Brazil.

“This is still a very bullish market and my analysis suggests strong fundamentals are still in place.”

Jack Scoville, vice president and analyst for “soft” commodities that include sugar at Chicago’s Price Futures Group, said Brazil could be forced to produce more sugar and less ethanol due to the current weakness in crude oil prices.“

Reports indicate that little is on offer from India. Thailand might also have less this year due to reduced planted area and erratic rains during the monsoon season.” Scoville said, referring to the two other major growing centers for sugar.

Investing.com’s Daily Technical Outlook recommends March sugar as a “Strong Buy”, suggesting a top-end resistance of 15.21 cents for the contract. At Thursday’s settlement, that would give the contract room to move up another six cents or 4%.

That would be a sweet move indeed if realized, given the bleak mood across most of the commodities spectrum now bar sugar.