The bell has sounded after the first round of the U.S. pandemic-turned-trade-fight with China. And the winner so far appears to be not presidents Donald Trump or Xi Jinping but Dr. Copper.

The red metal that’s supposedly the bellwether of the economy triumphed by rallying on a day when the White House threw all it had at China over the COVID-19, after Trump reiterated his threat to slap fresh tariffs against the Xi administration for allegedly creating the virus that made America the most infected country.

Copper was among the commodities that suffered most until the U.S.-Sino trade deal was signed in January to end the near year-long trade war between the world’s top two economies. Used in almost everything from construction to telecommunications, the metal remains super-sensitive to developments in its No. 1 market, China, and its prices are still down more than 16% on the year as Beijing and the rest of the world try to pick themselves up from the damage wrought by the coronavirus.

Therefore, it was quite extraordinary that should finish Monday’s session up 1% at $2.32 per lb, snapping a three-day decline, especially after Trump’s latest COVID-19 curveball aimed at Beijing. 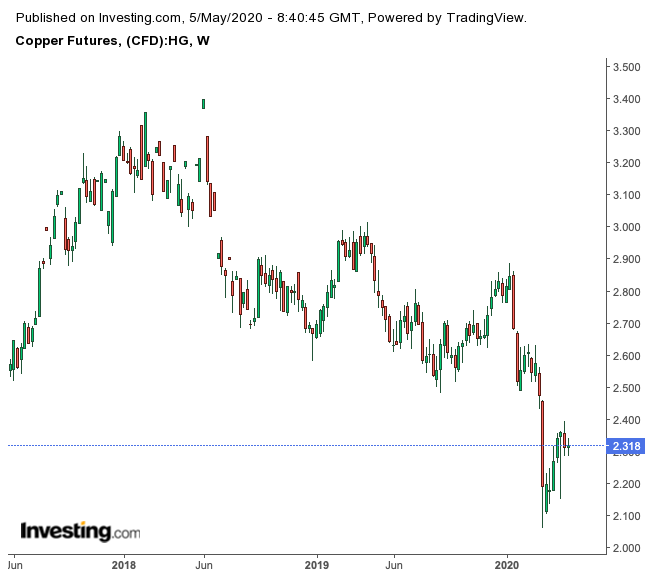 Given the sheer impossibility of predicting the global economy’s trajectory at this point, no analyst would dare say if copper had bottomed since the March low of $1.97 on COMEX and $4,371 on LME.

But some are willing to hedge their bets on China.

“China has already crossed the finish line, we’re still at the halfway mark,” said Phillip Streible, chief market strategist at Blue Line Futures in Chicago. He was referring to Beijing’s clear advantage over other nations in setting the course for rebuilding post pandemic—a point that seemed to matter more to markets than the tariffs threat waved by Trump.

“Some countries may have turned the curve faster than others, and demand may snap back quickly for them. But China is far ahead of the curve, and copper’s bet for now is on China. That could explain the action we saw today despite the heightened U.S.-China tensions. Such optimism could hold copper at these levels and even let it advance, unless, of course, the tariffs materialize, which isn’t what the markets are expecting.”

But markets are expecting one thing though: a severe global recession in the second half of the year. Real growth for the United States slipped 4.8% in the first three months of 2020 and the worst performance ever for the economy is expected in the second quarter, making a U.S. recession almost certain. At that point, the world’s attention is expected to be more U.S.-centric.

But Streible is hedging his bets earlier, and thus calling COMEX copper’s upside at under $2.50 by the third week of May.

Investing.com’s own Technical Daily Outlook tops Fibonacci resistance for COMEX copper at a modest $2.35, although it maintains a steady “Buy” on the metal.

“I would give the current run in copper two weeks before a further review,” said Streible. “By May 20th or so, you’d have a better idea of how the U.S. economic reopenings are faring to gauge how homebuilding and other activity will kick in.”

“The is still down more than 10% on the year. The U.S. Treasury is throwing all the money that it can at the markets and we’d have to see how well the markets respond to all that stimulus and whether it can lead to organic growth of the economy again.”

Underscoring the U.S. massive response to the pandemic, the Treasury announced on Monday a record $3 trillion this quarter from the debt market to fund the economy. Total fiscal support extended by Congress and the Federal Reserve to fund markets through the crisis could be five times more.

Eli Tesfaye, base metals strategist at RJO Futures in Chicago, is more bullish about copper’s near-term prospects, projecting an upside as high as $2.60 for COMEX futures. Like Streible, he expects copper prices to consolidate as well after that peak, given the economic uncertainties that follow.

“$2.50 is a pivotal point in my long-term chart, but I think we may get a pop to $2.60,” said Tesfaye. “I doubt that we will break below anytime soon, but we could slow down on recession worries. Whatever the case, copper would see $2.50 before it sees $2.”

His projection for copper is also based on China.

Chinese Construction Rumbling Back To Life

China accounts for nearly half of global copper consumption estimated at 24 million tonnes.

A total of 2.4 million tonnes of annual copper capacity—or 12% of global mine supply—has been temporarily shut due to virus-related curbs, Wall Street bank and broker Jefferies estimates.

While copper demand in China was down due to the virus “infrastructure projects there are now being pulled forward, factories are restarting, construction activity is picking up, traffic congestion is increasing and pollution is increasing”, Jefferies said in a note.

“This all suggests that demand in China is clearly improving from a very low base,” the brokerage said, adding that the early demand shock could now switch to “a more substantial supply shock.”

“After the collapse of 2008, China made a big deal of infrastructure spending,” he said.

“Now, you have a bunch of abandoned buildings and abandoned cities over China and big infrastructure spending is going to be needed to boost the economy. Copper will be one of the key metals in this rebuilding.”

In the case of the United States, the picture of economic reopening was less clear, he said.

“Copper prices can be on the defensive, trading sideways, in about two weeks as the market turns some of its China focus back to the U.S.,” said Tesfaye.

“There’s cheap money right now and U.S. domestic consumption can skyrocket. But working on construction sites isn’t like working at grocery stores and you might not be able to socially distance while being most productive. It’s a different sort of challenge.”

Sound of toilet flushing is thought to ...