Copper May Not Hit $3 Jackpot Despite Supply Crunch

The copper bulls haven’t had it this good in three years. But regardless how much better it gets for them, those holding US might not see the per lb anytime soon.

“The World Needs a Lot of Copper, but It Won’t Get It for $3 Per Pound,” Canadian investor Marin Katusa wrote in a lengthy post last summer.

A year on, that might prove true. September COMEX copper futures are set for an eighth straight week of gains, rising a cumulative 22% in the last two months. The last time copper rallied for this many weeks in a row was in 2017. That was when it went from a low of $2.62 per lb to a high of $3.18 between early July and late August, when it gained around 20%. 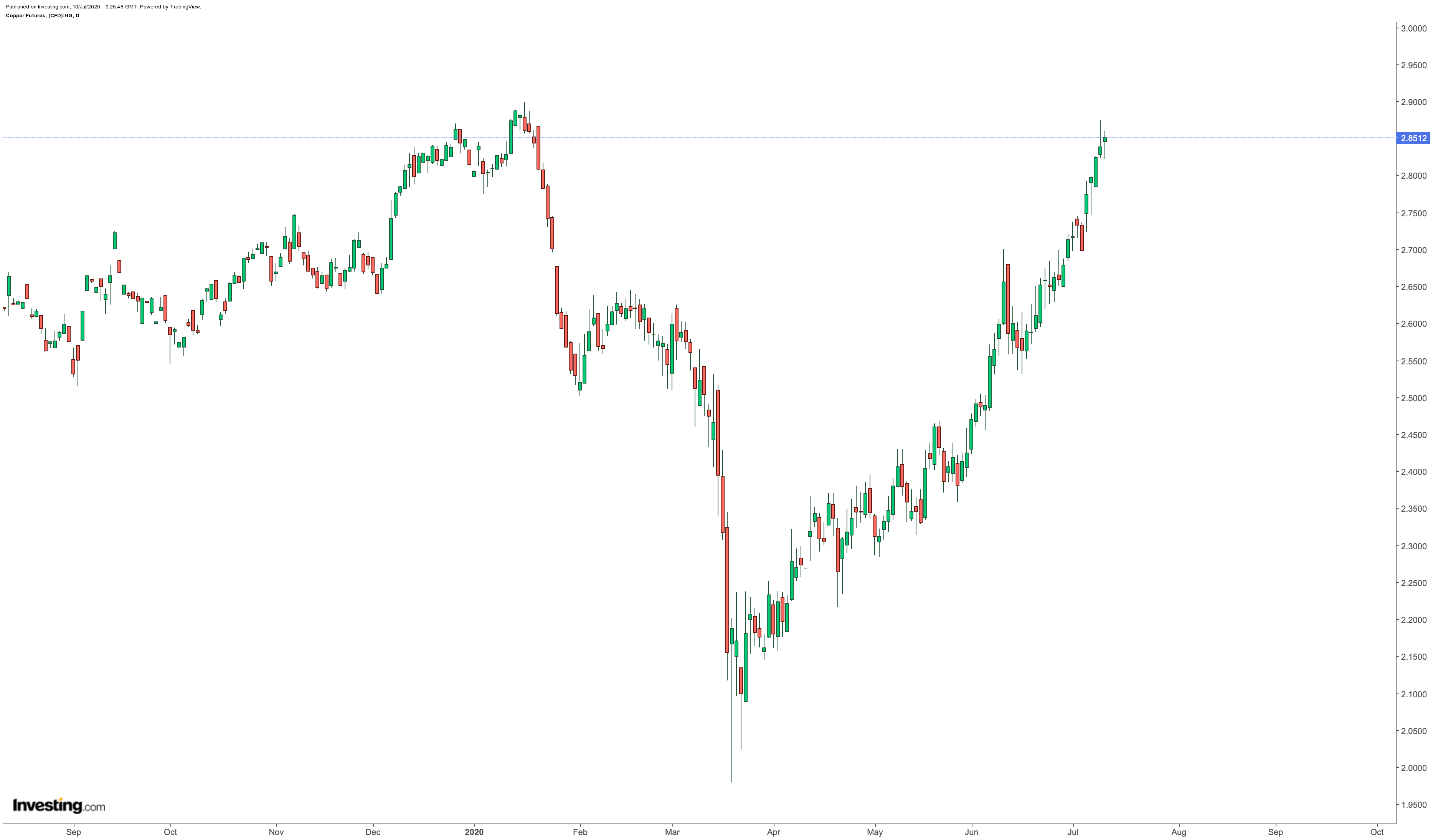 For Two Years, Copper Has Languished Below $3/lb

What’s different this time though is the $3 threshold, which has become near-impossible resistance for copper futures to crack over the last two years, due to constant headwinds from the global economy, even before the outbreak of coronavirus. Copper last traded around $3 in spring 2018, until the trade dispute between the US and China erupted in earnest, with both sides slapping tariffs on each other’s goods and services.

While the pandemic isn’t expected to make the target for $3 copper any easier, what’s also strange is that the market isn’t as influenced by the state of the global economy right now.

In fact, the rally of the past eight weeks has been chiefly due to concern over the supply bottleneck of copper coming out of South America. Thousands of copper workers have fallen ill in top producer Chile, which accounts for more than a quarter of global production.

Mines in Chile have postponed non-essential activities and reduced their labor force, in an attempt to keep workers safe, without forgoing too much output. Infections are also slowing mining recovery in No. 2 copper producer Peru.

The combined effects of these are driving the rally in copper, pushing three-month on the London Metal Exchange to a 14-month high of $6,360 a ton on Thursday, while front-month US futures hit a six-month peak of $2.8752 a lb.

Supply At The Heart Of The Rally

The coronavirus and stress it has brought on mines are doing their work in driving copper up. While that isn’t surprising, it is unusual that it should happen during one of the greatest global recessions in history. So much for a metal known as “Dr. Copper” for its supposedly prescient read of the global economy.

As Bloomberg noted in analysis on Thursday, “copper prices are surging, and for once it’s not because the economy is booming.”

But back to copper and the $3 target.

In April 2019, the US copper market reached a high of $2.9860. In fact, between February and May last year, COMEX copper was within striking distance of $3 per lb, staying above $2.93 in those three months.

If it couldn’t do it then, there’s a possibility it might not be able to do it this time either.

The global tightness in copper production could by all means keep US futures prices above $2.85, even reaching $2.90.

But the effect of the pandemic might also be a double-edged sword for copper: disrupting mine work and production that pushes prices up on one hand, while hampering the economic recovery that would be integral for demand growth.

As Katusa said in his post a year ago, one of the biggest drivers of copper demand in coming years would be electric vehicles, which were expected to lead demand growth of 4.5% annually over the next quarter of a century.

But growth in the EV industry hasn’t been as promising as charted and demand for copper hasn’t gone through the roof.

Economy Is The Key

With copper mines witnessing a drop in supply due to declining ore grades, production costs will likely grow as well. Lower output versus weak demand could trigger a tug-of-war in the market that would restrain any major upside breakout in the price.

Katusa said copper demand could explode over the next five years, resulting in COMEX prices as high as $5 per lb:

“The major takeaway is that the tight copper market is going to become very tight over the next 60 months, after which copper demand growth will significantly outpace available production. I believe this will result in an incredible bull market for copper.”

In summation, he asks if the copper mining industry can meet that much demand, and provides the answer himself, saying: “Yes, but not with copper at $3 per pound.”

That demand scenario is not expected to happen anytime soon, and neither is the price.