Copper Corrects; 3 Reasons This Is A Scale-Down Buying Opportunity

Many market participants call the red nonferrous metal that leads the industrial commodities trading on the London Metals Exchange “Doctor Copper” because of its long tradition of moving higher with economic expansion and lower with contraction, thereby making it a generally reliable diagnostician for the health or infirmity of global economies.

After trading to a low of $2.0595 in March 2020 during the height of COVID-19 induced selling, copper took off on the upside. Shares of companies that extract the nonferrous metal from the earth’s crust exploded higher.

Mining companies tend to outperform the commodities they produce on the upside and underperform on the downside. Freeport-McMoran (NYSE:) and Southern (NYSE:) Copper Corporation (NYSE:) are two of the leading copper producers worldwide. The iPath Series B Bloomberg Copper Subindex Total Return ETN (NYSE:JJC), an ETF product, is a pure play on copper as it reflects the red metal’s price action.

Copper had a rough week in mid-June, but that could create another in a series of buying opportunities for Doctor Copper and mining companies as they continue to have the potential to reach higher highs over the coming months and years. The current selloff could be a blessing in disguise for value seekers.

High-flying copper reaches a record in May

2021 has been a very bullish year for the copper market. The price moved above the $4 per pound level for the first time since 2011 in February.

The chart highlights the ascent of COMEX copper futures which continued to rally, reaching a new all-time high in May when the price surpassed the 2011 peak at $4.6495 per pound. Copper moved to $4.8985 per pound on the continuous contract during the week of May 10.

Copper corrects: The Fed makes it a falling knife

After reaching a new high, copper retreated, but the price became a plunging knife last week. On June 15, the price experienced its most substantial decline in months, falling from $4.5365 on the July COMEX futures contract to a low of $4.3155.

The price continued to drop, making lower lows through Friday, June 18, when it was trading near the lows of the week at just above the $4.12 per pound level, over 15% below the May 10 high.

The daily chart of July futures shows the plunge that turned the red metal into a falling knife last week.

On Wednesday, June 16, the US Federal Reserve left the short-term Fed Funds rate at zero to twenty-five basis points. The central bank stated it would continue to purchase debt securities at a rate of $120 billion per month.

The Fed raised its GDP growth forecast to 7% and expects to rise from 2.5% to 3.4% in 2021 but restated that inflationary pressures are “transitory.” The only deviation from the past months was that it increased the reverse repo rate by five basis points while saying that it may be time to start “thinking about thinking about” interest rate hikes and tapering the QE program.

The shift was enough to ignite a bearish fuse in commodity markets. Metals and many other commodity prices fell, with copper posting losses on Thursday and Friday, following the meeting.

At his , Chairman Powell evaded many specifics. When questioned on the lookback period for the Fed 2% average inflation target, he said the period is “discretionary.”

On Friday, June 18, James Bullard, a voting member of the FOMC, said that rates might need to rise in 2022 to address mounting inflationary pressures. The stock market fell in the wake of Bullard’s comments.

The Fed may have helped its efforts to make inflation “transitory” with the shift towards a more hawkish stance on monetary policy as commodity prices became falling knives.

Copper fell to its lowest price since mid-April late last week. The red metal last traded at $4.12 per pound on Apr. 15. After an over 15% correction, this could be an excellent time to begin thinking about adding some of the red metal to your portfolio. Three factors support the price of the leader of the base metals at near the $4 per pound level.

Goldman sees the price at $15,000 per ton by 2025, with other analysts calling for even higher prices. While COMEX copper prices were at the $4.12 per pound level on June 18, the LME price settled at $9,230 per ton. With substantial upside potential, buying copper on a scale-down basis during the current correction could be the optimal approach for future profits.

FCX and SCCO correlate well with the red metal

Shares of companies that extract copper from the earth’s crust tend to outperform the red metal during rallies and underperform when the price corrects to the downside. 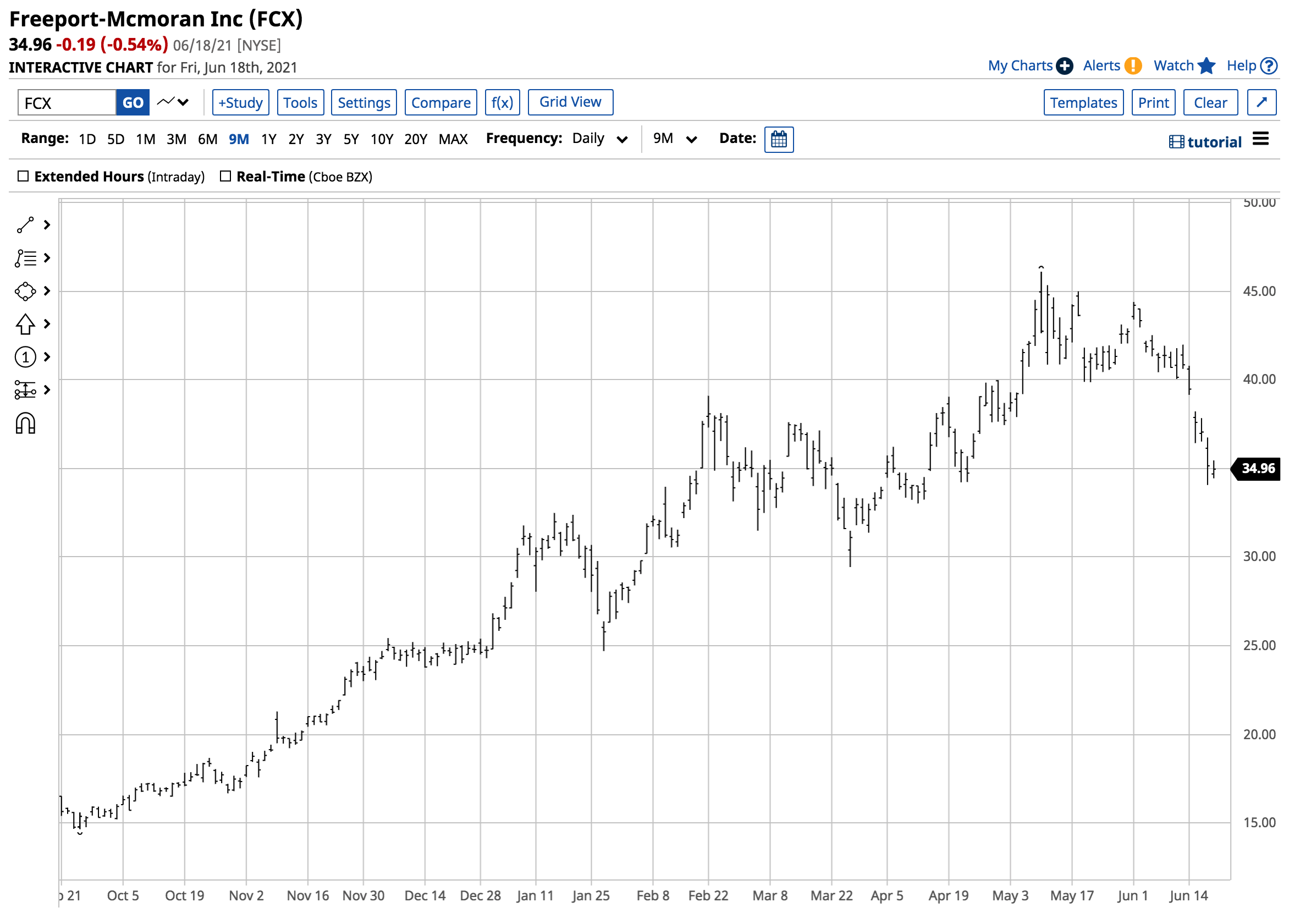 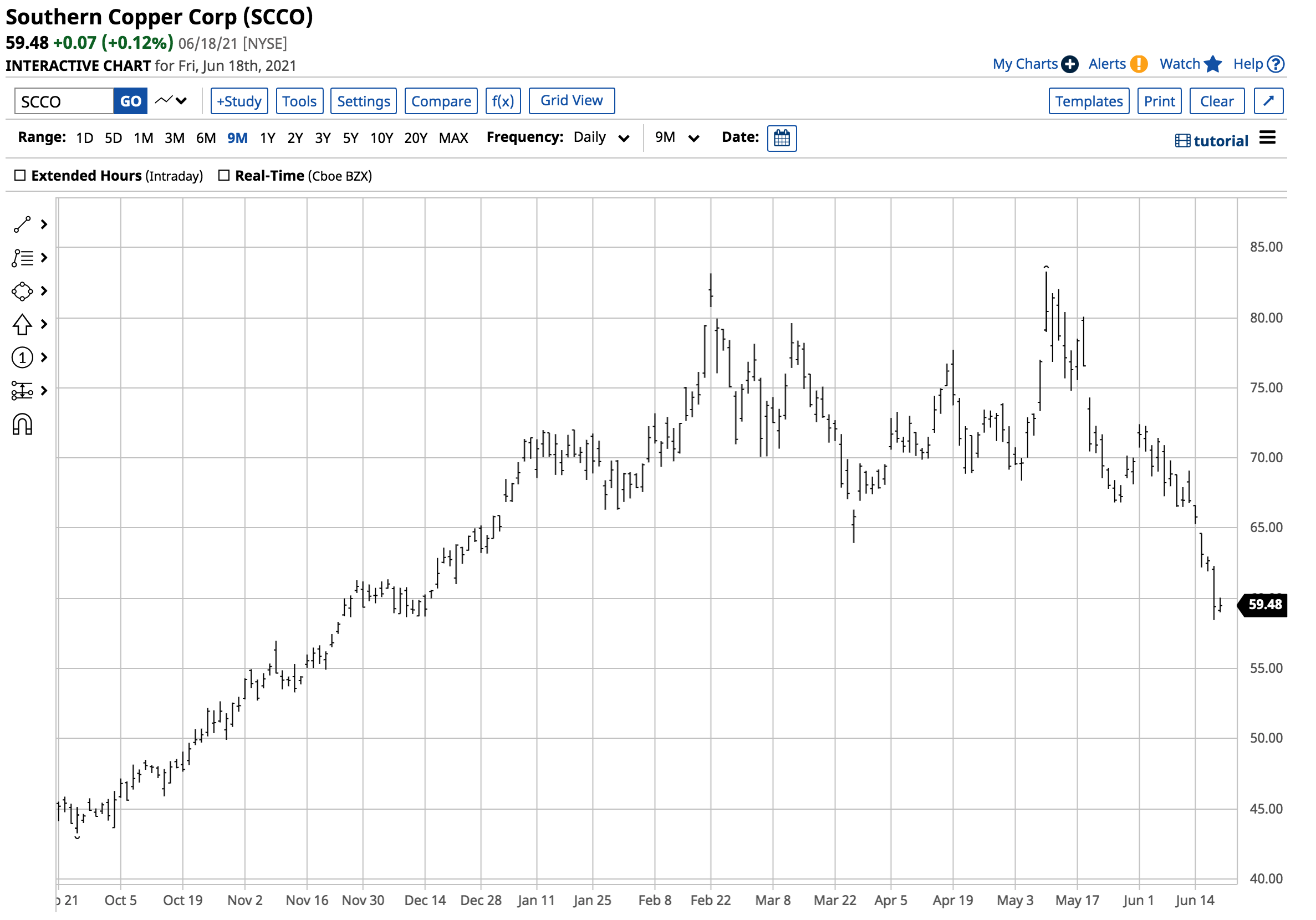 FCX outperformed copper on the upside, while SCCO shares lagged, turning in a weaker percentage performance. During the recent correction, both FCX and SCCO underperformed copper’s price action in the futures market. The bullish price action in copper is likely a gift that keeps on giving to the two established producing companies.

JJC is a pure play on copper

JJC is a copper ETF product that seeks to replicate the price action in the base metal, making it far more of a pure play on copper’s day-to-day price volatility. 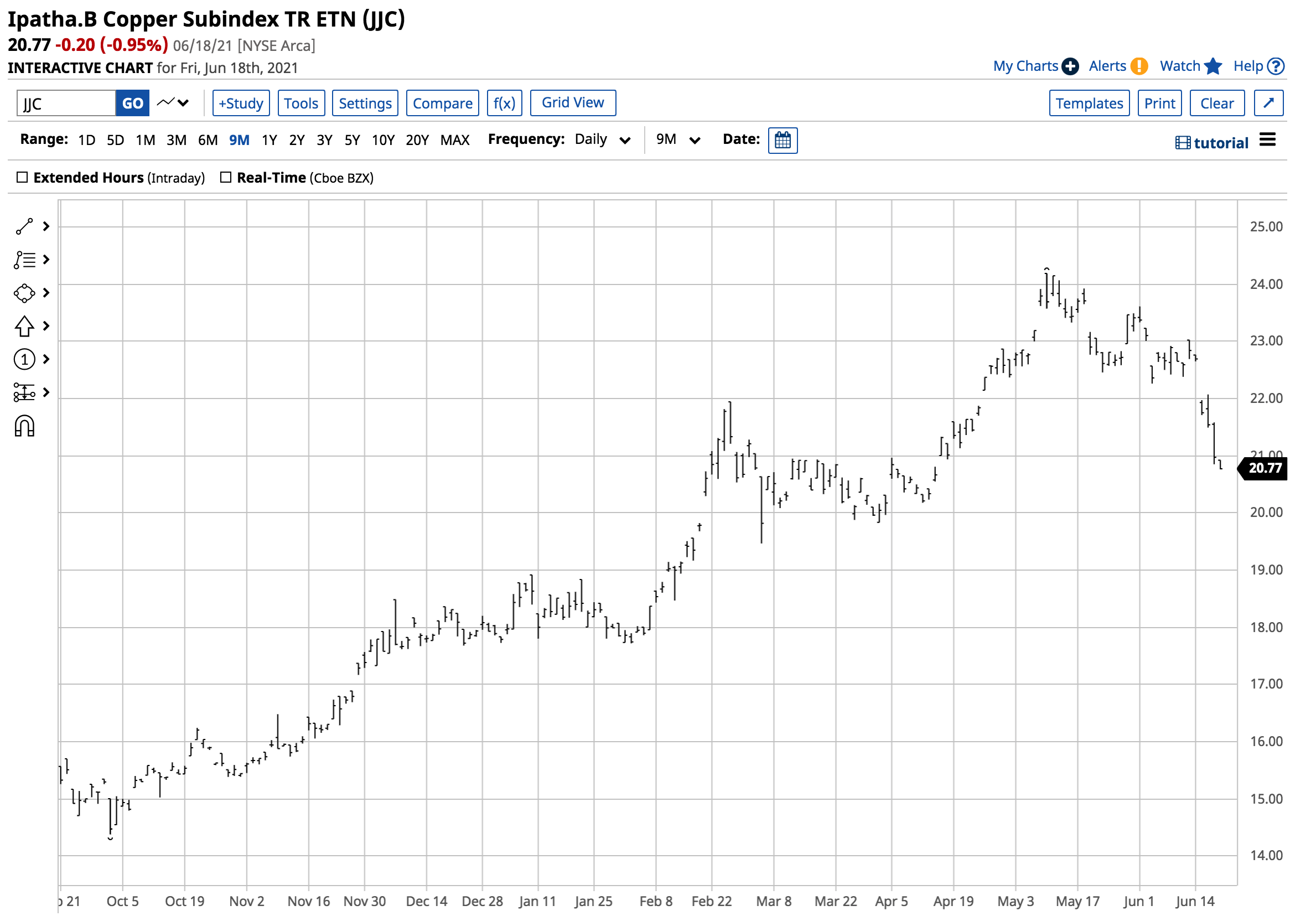 JJC, FCX, and SCCO should continue to track the copper price on the up or downside. Analysts are calling for much higher prices over the coming years.

The recent correction could be a golden buying opportunity for the red metal. However, it is impossible to pick bottoms during corrections as they tend to take prices far lower than fundamentals or even logic dictates. A scale-down buying program could be the optimal approach for copper bulls in the current environment.