Copper And Lumber Sending Signals For All Markets In 2021

and are critical industrial commodities for construction and infrastructure building. The red nonferrous metal and wood prices reflect the market’s current and future economic growth or contraction perceptions.

Since then, both commodities have come storming back, with lumber rising to a new all-time high over the past months and copper trading to its highest price in almost eight years. Copper and lumber are sending the markets a signal for the coming year that we shouldn’t ignore.

Copper rises to its highest price in almost eight years

Over the years, many market participants consider copper the “Doctor” of markets as it tends to diagnose the global economy’s health and wellbeing. A weak copper price often signals economic contraction, while strength in the red metal is a sign of growth.

China is the world’s second-largest economy and most populous nation. Therefore, the Chinese are the demand side of the fundamental equation for many commodities, and copper is no exception. Copper is a building block for infrastructure worldwide.

Copper has been on a bullish tear since March. 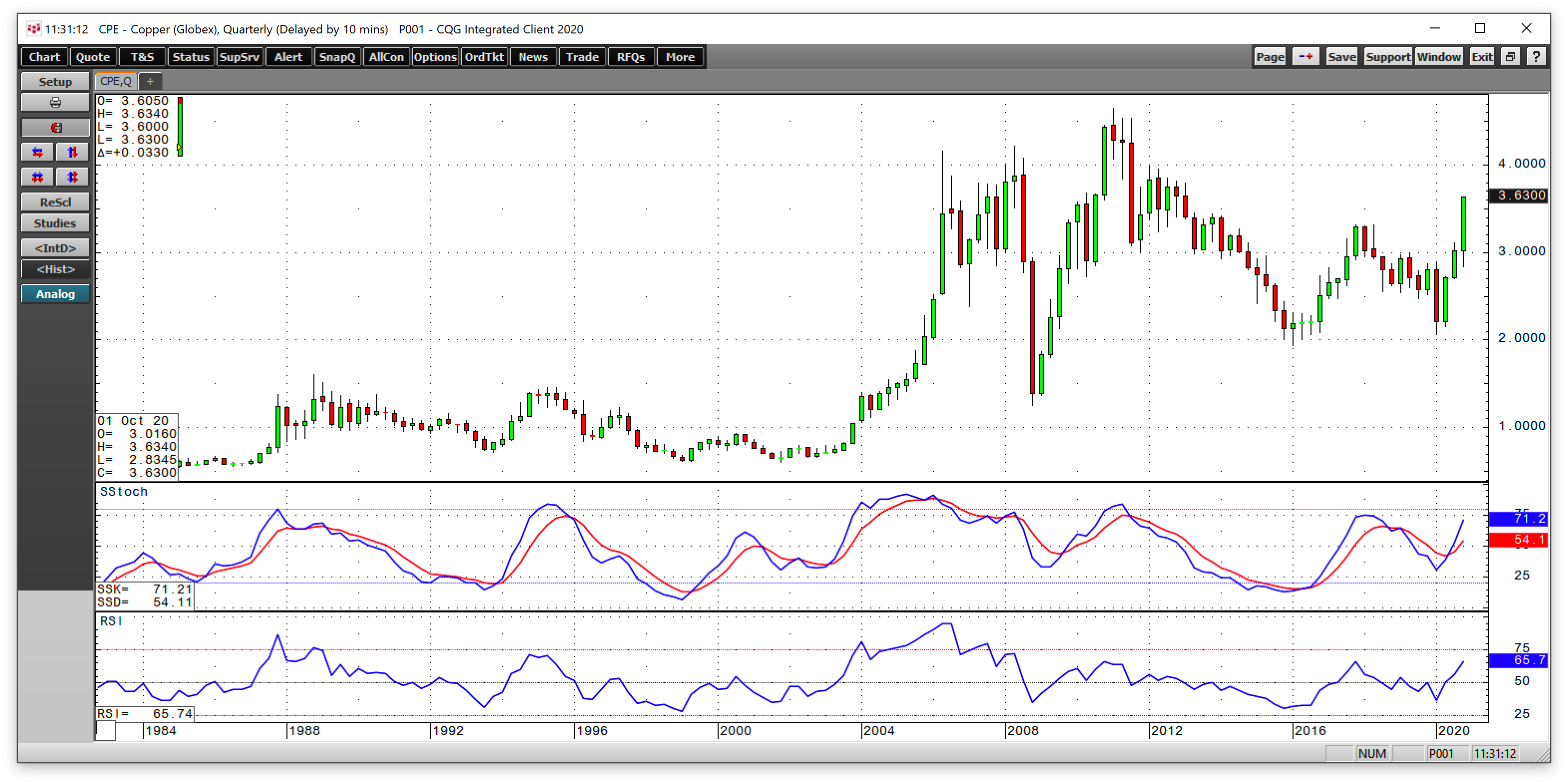 The chart highlights the ascent of copper’s price since then, which pushed the base metal to its highest level since 2013. The red metal traded to a high of over $3.6455 per pound on Dec. 18.

Copper has posted substantial gains over the past three quarters. Quarterly price momentum and relative strength indicators are trending higher as we move into the new year.

After correcting, Lumber moving back towards September record high

Lumber is an industrial raw material required for home and most construction projects. The lumber futures market suffers from a lack of liquidity, but its price action is a barometer for the supply and demand equation for the commodity.

In 2020, as COVID ramped up worldwide, many people sheltered at home, causing an increase in home improvement projects. The demand for lumber rose. Simultaneously, shutdowns at mills because of the virus caused supplies to decline when the demand was increasing. 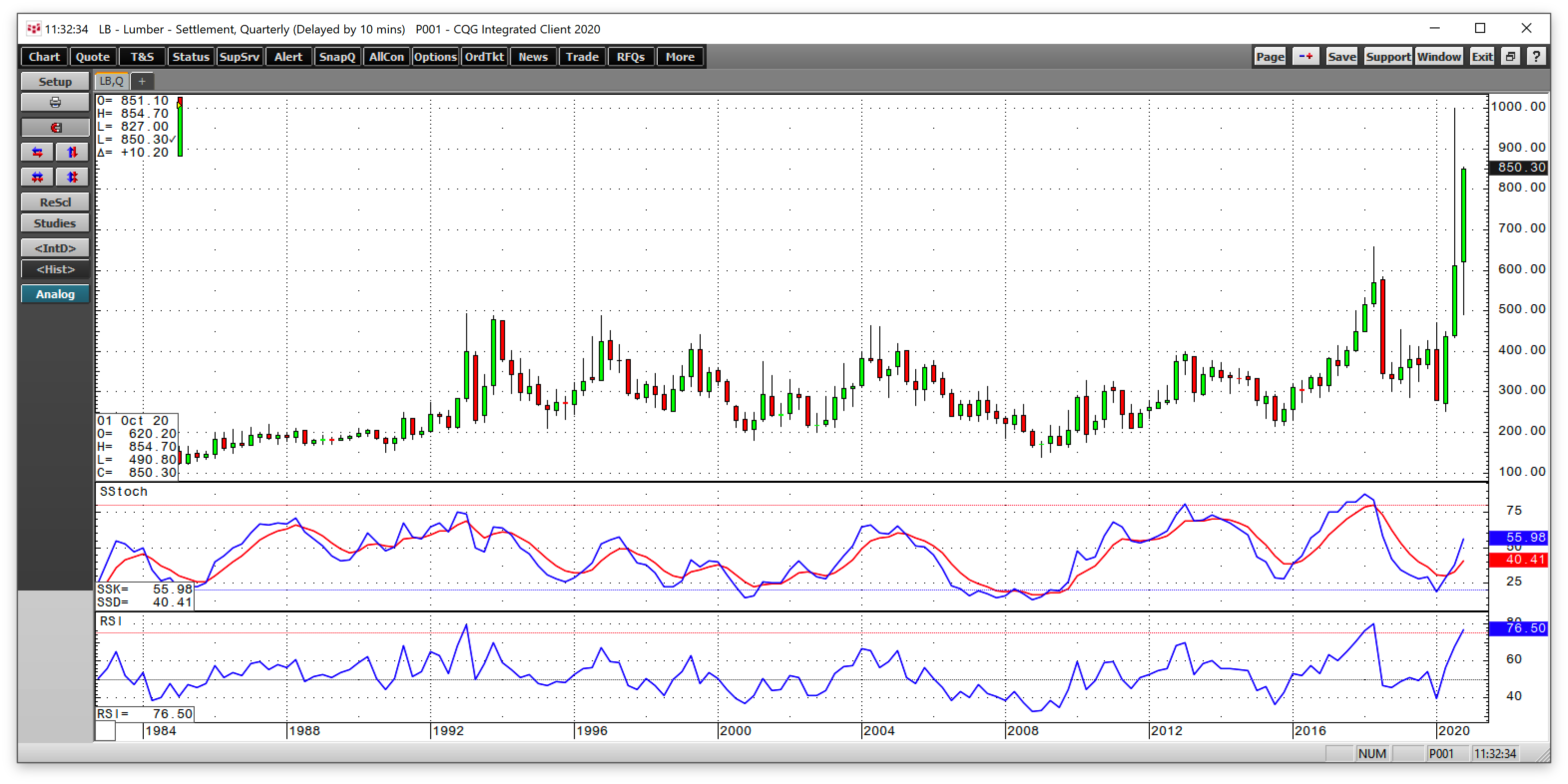 The quarterly chart illustrates the price action in lumber that took it to an all-time high of $1,000 per 1,000 board feet in September. The price almost quadrupled from the April low.

After a correction to just below the $500 level, nearby lumber futures were back above $850 at the end of last week. Quarterly price momentum and relative strength indicators were trending higher at the end of 2020.

I view lumber and copper as two industrial commodities that are barometers of inflationary pressures. Inflation is an economic condition that erodes the purchasing power of money.

Copper and lumber prices rise or fall for many reasons. Supply and demand considerations are always present in commodity markets and cause cyclical price behavior.

Commodities are volatile assets. They often fall below or rise above rational levels before the fundamental cyclical pressures create bottoms or tops.

While each commodity has idiosyncratic price cycles, macroeconomic and other factors can influence prices. In August 2020, the US central bank shifted its target from 2% to an average of 2%. The move was significant as it signaled that the Federal Reserve not only expects inflationary pressures to rise; they are also encouraging a return of a condition that erodes the value of the and other world currencies.

Levels of monetary and fiscal policy signal higher highs in 2021

Central banks and governments worldwide, led by the US Fed, addressed the financial fallout from the 2020 pandemic with the same set of tools they used in 2008 during the global financial crisis.

Government stimulus in 2008 and again 2020 has been a lifeline to businesses and individuals during turbulent times. This year, the US Treasury borrowed $3 trillion to fund the stimulus, far exceeding the previous record when they borrowed $530 billion from June through September 2008. More stimulus and borrowing are on the horizon in 2021.

The tidal wave of dovish monetary policy and a tsunami of fiscal stimulus in 2020 are at far higher levels in 2020 than in 2008. From 2008 through 2012, commodity prices rose in a secular rally. The crisis in 2008 was far different than in 2020. However, the same tools mean we should expect similar results. The price tag for the current paths of monetary and fiscal policies is inflation.

The price action in the copper and lumber markets signifies a variety of factors for the coming year. Still, both point to rising inflation that will continue to eat away at the value of all fiat currencies.