The two metals are supposed to be on the opposite ends of the investment spectrum, one leveraging on risk and the other safe-haven money. Yet, startlingly, prices of and have risen and fallen together in each of the past five years. And for 2021, they look like they could be rallying in sync.

Copper, which is finishing 2020 up about 27%, is expected to add to its gains in the coming year from a forecast rebound of the global economy as vaccinations for the coronavirus gather pace.

In gold’s case, this year’s 21% rally is expected to grow into 2021 if the Biden administration gets to pass more stimulus for COVID-19 relief as it intends.

Despite the positive outlooks, price forecasts for both copper and gold are murky in the year ahead.

Copper Likely Taking Out This Year’s Price Highs In 2021

U.K.-based Commodity Market Analytics thinks can easily revisit and breach this year’s high of $8,027 a tonne if top buyer China continues to recover faster from the pandemic than the rest of the world. 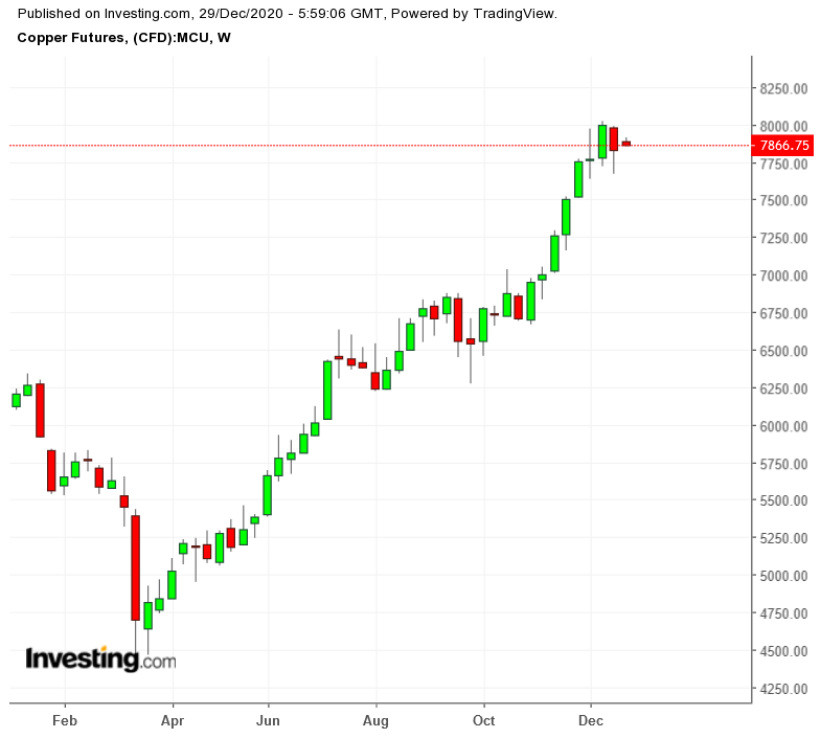 The firm’s forecasts are on the higher — and realistic — side as it accounts for the 18% rally in copper since the beginning of November as news began circulating on the efficacy of the COVID-19 trial vaccines developed by Pfizer (NYSE:) and Moderna (NASDAQ:).

Fitch Ratings and Bloomberg, meanwhile, published consensus estimages in mid-December that still have LME three-month copper at $6,800 and $6,900, respectively, on the average for 2021.

Commodity Market Analytics’ Dan Smith, in a blog published on the INN portal, says China’s projected growth of 2 percent or beyond in 2021 will lead the charge for global metals demand and prices, particularly that of copper.

Recovery is also expected to be swift in Japan and Europe where activity fell the most in 2020 due to COVID-19-related lockdowns, he said.

In the United States as well, Biden’s presidency could boost demand for copper via its green agenda that could see “encouragement of renewable power and electric vehicles, which will both boost copper demand”, Smith added.

London-based CRU Group also anticipates higher 2021 copper prices on average than forecast by Fitch or Bloomberg.  CRU’s principal consultant Charlie Durant told the INN portal that it thinks the red metal will trade at or above $7,000 over the next 12 months on the LME, as risk appetite grows for most commodities along with equities.

“Bulls will argue the copper price rally is still in its infancy given low exchange stocks and the prospect of a balanced market next year. Bears will point to 90th percentile cash costs for miners of just $5,000. That uncertainty means 2021 could be a year of significant price volatility.”

Like Smith of Commodity Market Analytics, CRU’s Durant is also banking on China to outpace growth projections, and spark another 2020-like phenomenon in copper prices. Copper saw a 12% plunge in March, after two months of lockdowns in China, but began rallying without pause from April as the No. 2 global economy reopened for business, even as the rest of the world, including the United States, went into shutdown.

“I think that the most interesting part of the story has been how quickly Chinese purchasing recovered and how much metal has been sucked into China.”

“The most recent Chinese macroeconomic data is generally robust, with monthly real estate completions turning positive. For 2021, we think that stimulus measures, a recovery in the automotive sector and a buoyant construction market can again help power Chinese refined copper demand growth to over 2 percent year-on-year.”

As for gold, analysts at Goldman Sachs are targeting a record as high as $2,300 an ounce in 2021, expecting recovery from the coronavirus-related recession to fuel higher inflation next year. 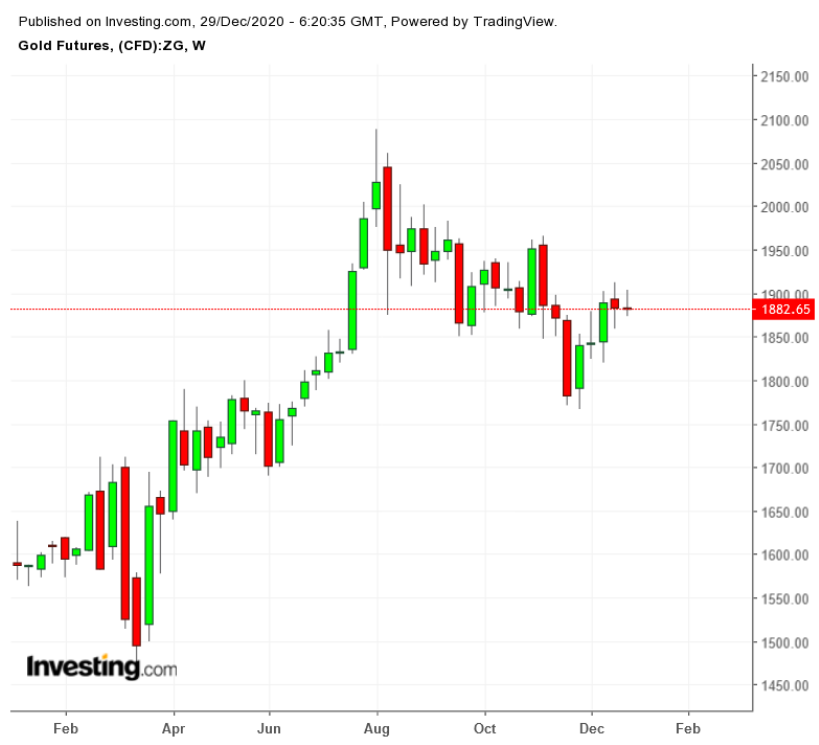 Goldman’s economics team sees inflation peaking at 3% in 2021 before turning lower by the year-end.

A further boost to gold prices is expected to come from a recovery in demand for the physical form of the yellow metal from traditional big bullion buyers in India and China, Goldman’s analysts say.

London-based Capital Economics, however, expects the upside to COMEX gold futures in 2021 to be capped at around $1,900 — barely higher from current levels. It says increasing inflation would undermine the prolonged low-rate environment and dissuade investment in non-interest-bearing assets, like gold.

At Investing.com, our firm belief is it that gold futures can even surpass Goldman’s $2,300 projection — provided Biden gets his way with the stimulus efforts he has planned to spur the U.S. economy back to activity.

The herculean effort to get just a second relief plan through the U.S. Senate this year is testimony to the odds in getting gold to the next phase of $2,000 pricing.

To cut to the chase, the Biden administration needs to be unshackled from the political deadlock that the current Republican-controlled Senate will likely force on any COVID-19 relief — or, for that matter, bill — that his administration intends to pass in 2021.

One definite game-changer to this will be the two Georgia Senate run-off races on January 5, that if won by the Democrats, will put the incoming president’s party in effective control of both chambers of Congress and grant it the ability to pass just about any legislation.

The President-Elect has already said he plans to encourage Congress to pass a larger stimulus package after his Jan. 20 inauguration. If the Democrats win the Georgia run-offs, Biden might go for two, or even three, relief packages before 2020 ends, to try and kick the U.S. recovery into high gear.

At that point, even $3,000 gold might not be an impossible price to consider.