Is doomed to finish another week under $20? It depends not just on oil supply and storage, but also on how markets digest America’s progress through the COVID-19 pandemic and the protests being waged in some U.S. states to expedite the economy’s reopening.

With the on West Texas Intermediate expiring by Tuesday, Investing.com has already begun quoting the more actively-traded June futures as WTI’s spot month. The switch enabled U.S. crude to open Monday’s trading in Asia at nearer to $25 per barrel, significantly higher than Friday’s settlement of $18.27. Even so, by the noon hour in Singapore (0400 GMT), June WTI had lost more than 5%. 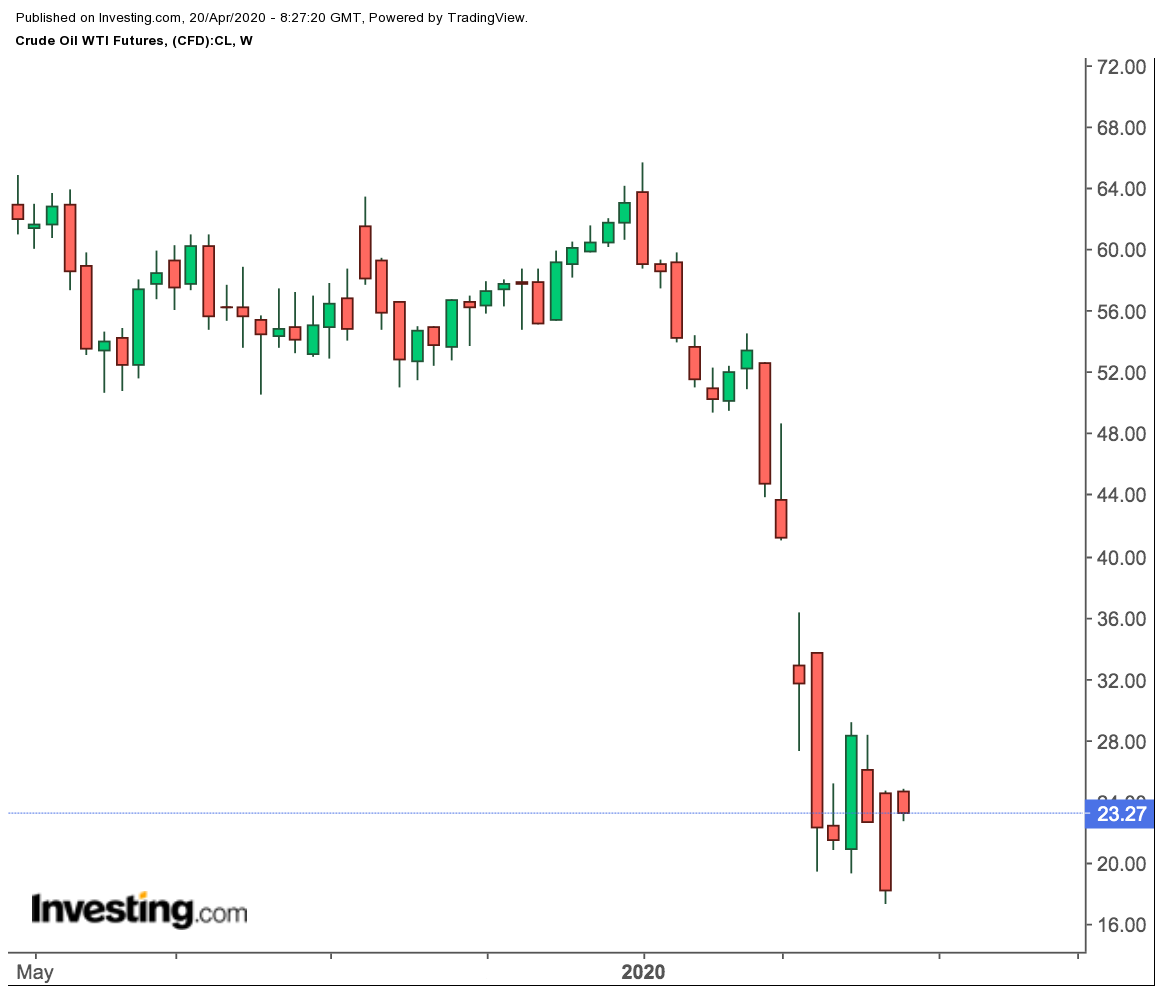 For those still using May as the front month, the plunge was worse. As of Friday, May WTI had less than a third of June’s volume, hitting $17.31 — the lowest since November 2001. By Tuesday settlement, it had sunk to a bottom below $14.50 — the lowest since March 1999.

Oil: How Low Will it Go?

How low June WTI will get this week will first be determined by how quickly storage facilities for oil are filling up in the United States and across the world.

According to known data, storage at the Cushing, Oklahoma hub for WTI deliveries reached 71% of working capacity as of April 10 — up 15% from two weeks earlier. At the rate Cushing is building — an average of 16 million barrels weekly over the past three weeks — analysts say the hub could hit capacity by mid-May, or the first few weeks of June, at the latest.

Oil storage on sea is growing too. Global crude tankers are estimated to hold a record high of 160 million barrels, doubled from just two weeks ago.

Amid the pandemic that’s destroying demand for oil faster than producers can cut, how much storage is left for crude and whether this will run out has been a matter of great debate. Rystad Energy, a Norwegian consultancy, and Orbital Insight, a California satellite data company, have different perspectives on this.

Oil Storage Puzzle: Is There Space for 200 Mln Barrels or 2 Billion?

Oslo-based Rystad estimates that U.S. crude storage capacity alone could have fallen to as little as 200 million barrels in April from demand lost to the COVID-19 outbreak. In practice, available space might be closer to 150 million barrels, it says.

Its breakdown of worldwide storage is as follows:

Mixed messaging on the impact of the pandemic on America’s health itself was having varying influence on investor behavior across markets.

Wall Street continued its recovery last week on optimism that the United States was progressing in its fight against the coronavirus. Andrew Cuomo, the governor of New York, the state at the epicenter of U.S. COVID-19 infections, said Sunday he continued to see a decline in hospitalizations and daily deaths.

But Cuomo also noted the need to significantly expand testing for COVID-19 to avoid igniting a new wave of infections and called on the federal government to help New York’s labs acquire the chemical reagents needed to perform those tests before the state’s economy can be reopened.

It was a similar story in neighboring New Jersey, where the virus’ curve was showing signs of flattening in some places and ramping up in others, according to Governor Phil Murphy.

Amid this, President Donald Trump praised protests in states run by his Democrat rivals, saying the governors there “have gone too far” in imposing social-distancing requirements — the same ones he approved — for the pandemic. That muddled the takeaway message for investors on how well the federal administration was working with the states in getting the country back to work. indicated a lower open for Wall Street on Monday.

But back to the supply of oil, the need to cut production could not be greater.

The Paris-based International Energy Agency expects April demand for crude to drop by 29 million barrels a day to levels not seen in a quarter of a century. That equates to roughly 29% of the world’s 100-million-barrel daily oil-demand figure from 2019.

The GLOPEC alliance of world oil producers, meanwhile, has officially committed to reduce only 9.7 million barrels per day — despite Trump’s protestations that the actual cuts will be closer to 20 million barrels daily. The energy ministers of Saudi Arabia and Russia said before markets closed last week that they were monitoring to see if additional cuts were needed.

“The industry will be wiped out if cuts are not introduced,” Pioneer CEO Scott Sheffield.

But others like Chevron (NYSE:) and Marathon Oil (NYSE:) stood in Sheffield’s way.

“I would argue that among global producers, the U.S. has acted first and has acted quite strongly,” Marathon CEO Lee Tillman said.

“The bottom line is we’re already cutting and cutting deeply,” Tillman said, adding that shale oil drillers in Texas were on track to cut capital expenditure — corporate speak for oil search-and-drilling-related spending — by as much as 50% this year.

On the global front, oil companies have cut capex by 26%, or $60.5 billion, a Reuters factbox showed.

Yet, on the U.S. side, drillers may have become victims of their own success — i.e. drilling efficiency.

Total U.S. crude production is about 1.7% above where it stood a year ago, with output still estimated at 12.3 million bpd last week, versus the record high of 13.1 million bpd in March.

“The U.S. upstream sector is currently deploying 438 or 72.8% fewer drilling but are producing 3,425,000 bpd (38.6 percent) more oil than they were producing in October of 2014,” said Dominick Chirichella, director of risk and trading at the Energy Management Institute in New York.

On the precious metals front, opened in Asia at just under $1,700 an ounce — the berth it fell off on Friday as Wall Street’s “soon-to-reopen” mantra about U.S. businesses coming back from the COVID-19 sparked profit-taking. 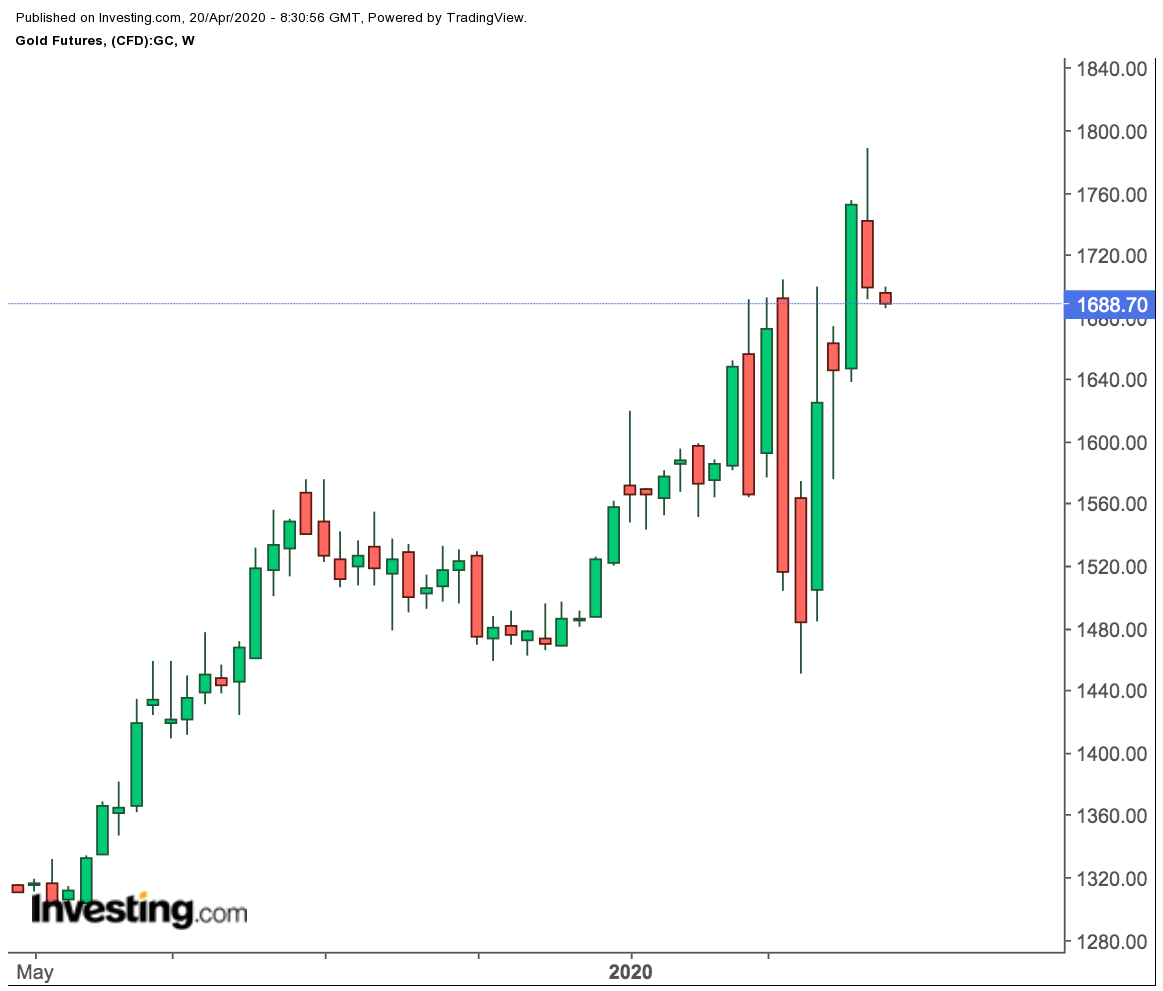 Analysts were, however, optimistic of gold’s eventual return toward a path that will see it testing the $1,800 highs and, possibly, record highs at above $1,900.

“Gold will remain supported by the boatload of monetary and fiscal stimulus that will be in place for the foreseeable future,” said Ed Moya, analyst at online trading platform OANDA.

“Record high calls for gold in dollar-denominated terms are slowly becoming the base case scenario, so we could see volatility ramp up over the coming weeks.”

The plunge in oil prices is the ...