Commodities Week Ahead: Will Oil Align With Saudi Wishes? Time To Watch Gold

While oil was getting crushed on Friday by Russia’s suggestion that OPEC shouldn’t think of extending output cuts when it meets this week, Bloomberg ran an article reminding the market of something else that Saudi Arabia wants from the cartel’s members and allies: respect for pre-agreed cuts.

At a glance, what Russian Energy Minister Alexander Novak and his Saudi counterpart Abdulaziz bin Salman hope to achieve from the Dec. 5-6 seem different. Yet, the two have similar objectives: Reduce stress for their nation’s oil operations and maybe—just maybe—get crude prices up too.

But what makes the Saudi aspiration more difficult is that it needs Russia’s help to continue manipulating global oil production and prices.

Moscow, in contrast, is in quite a different position.

Standing between the No. 1 oil producer, the United States, and third-place Saudi Arabia, Russia is a mere ally in the enlarged OPEC+ group—not a member.

It chooses to cooperate with Saudi Arabia because it wants to, and is free to decide on whether to cut production now or later and by how much, regardless of promises made to the kingdom.

Saudis Beholden To The Russians

Wielding massive influence over Russia’s private sector, the Putin administration is in a position to do what the Trump administration can’t with the independent U.S. oil industry.

The Saudis have little choice but to trust Russian President Vladimir Putin to deliver fewer barrels to the market—which U.S. President Donald Trump refuses to do anyway because of the notion that higher oil prices could hurt the U.S. economy and his reelection chances in 2020.

But in turning to Putin for help, the Saudis also go with the whims of the Russian president, who can simply, in oil parlance, tell the Saudis to go turn off their own spigots.

According to Friday’s Bloomberg story, Abdulaziz is likely to use his first OPEC meeting as Saudi oil minister to signal that, as the cartel’s dominant producer, Riyadh is no longer willing to compensate other members’ non-compliance to agreed cuts.

The current deal is for an OPEC-wide cut of 1.2 million barrels per day (bpd), a goal the Saudis say they’ve shouldered more than any member or ally of the cartel.

The Saudi list of suspects for overproduction within OPEC has had the same serial offenders over the past three years: Iraq, which during some months this year produced nearly 4.8 million bpd compared to its 4.51 million quota; and Nigeria, which pumped 1.8 million bpd versus a promised 1.68 million.

Notably added to the list this year was Kazakhstan, which accepted a limit of 1.86 million bpd but somehow produced closer to 1.95 million.

According to Reuters data, Russia’s overproduction stood at about 70,000 bpd, and it was partly to compensate for the May-June outage on its Druzhba crude pipeline, where Moscow lost some 19 million barrels due to contamination.

While not as great a disrupter to the OPEC+ pact, Russia’s participation in the plan is, however, critical for market confidence, given its standing as the world’s second largest oil producer. The OPEC+ pact expires in March and the Saudis hope to get an extension until June at this week’s meeting. 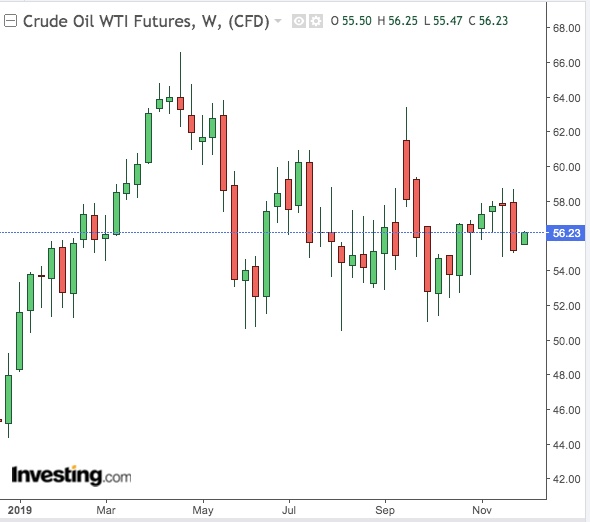 If Moscow again mutters indifference to the Saudi plan, oil prices could crash by another 4% or more as they did last week. Crude is still up strongly on the year, with showing a 23% surge and global benchmark a 14% gain.

Yet, if OPEC doesn’t continue cutting production, it’s hard to imagine those gains holding up well.

According to people familiar with Saudi thinking, Abdulaziz will try and browbeat the serial offenders within OPEC into delivering the barrels cuts they pledged to maintain.

But will Riyadh be able to do the same with Moscow, and expect similar results? In old school talk, the question is akin to whether the school yard bully will be willing to take on someone of his size—and be able to win.

To Avoid Market Crash, The Russians Might Just Agree To Saudi Plan

Perhaps the Saudis will not have to wage such warfare with the Russians after all. That’s because, despite the drama created by Moscow, there’s a possibility that Russia will agree before the end of this week to kick OPEC+’s 1.2-million-bpd-cuts can further down the road to June.

We’ve seen Putin at this kind of crossroads before and we’ve seen him going OPEC’s way in the end. There’s a chance he’ll do so again. Already, Novak has suggested a workaround—changing the way Russia’s production is calculated.

This way, both the Russians and Saudis will be happy and the market will gladly buy the narrative. Or will it?

For The Saudis, All Roads Lead To Aramco’s IPO

How the market views this week’s OPEC meeting is critical for the Saudis because of their dire need to keep oil prices rising amid the work underway to list their state oil company Aramco.

It’s no coincidence that the pricing for Aramco’s initial public offering is being announced on Dec. 5—the opening day of the OPEC meeting—to leverage maximum market impact on the IPO and pressure an outcome favorable to the company.

It’s also a no-brainer why the Saudis don’t want to shoulder any more cuts for recalcitrant OPEC members—because all that burden will fall upon Aramco.

Unlike in the past, when it made deep cuts just to hold up oil prices, Aramco now needs to optimize its own production within OPEC constraints to create a healthy balance sheet for its investors.

Just an idea of what Riyadh has lost in oil revenue over the past three years: Russia is earning $170 million a day more than it did in the final quarter of 2016, when the OPEC+ cuts were first agreed; the Saudis are making just $125 million more.

Global Trends And Forecasts Not Aligning Yet With Saudi Plans

As they stand, global trends and forecasts don’t look too promising for what the Saudis have in mind. A Reuters survey last week of 42 economists and analysts forecast Brent to average $62.50 next year, little changed from October’s $62.38 outlook.

OPEC’s own production outlook reflects a surplus of around 70,000 bpd next year. Analysts pegged demand growth at 0.8-1.4 million bpd next year.

“OPEC+ is in an unenviable position, struggling to prop up prices against weak demand growth, fragile market sentiment and strong gains in non-OPEC supply,” Fitch Solutions said in a commentary on Friday.

Trade Woes: Gloom For Oil And Boon For Gold?

And then there’s the trade war—Trump’s never-ending guessing game on the U.S.-China negotiations, and how each day could be a blessing or doom for the markets, depending on his call.

On Friday, the U.S. president signed into law two U.S. bills aimed at supporting protests by Hong Kong citizens against Beijing—a move that further threatens the chances of a trade deal. If there’s more of such negativity, then gold prices could rise within the $1,460-$1,480 channel as investors seek a hedge. 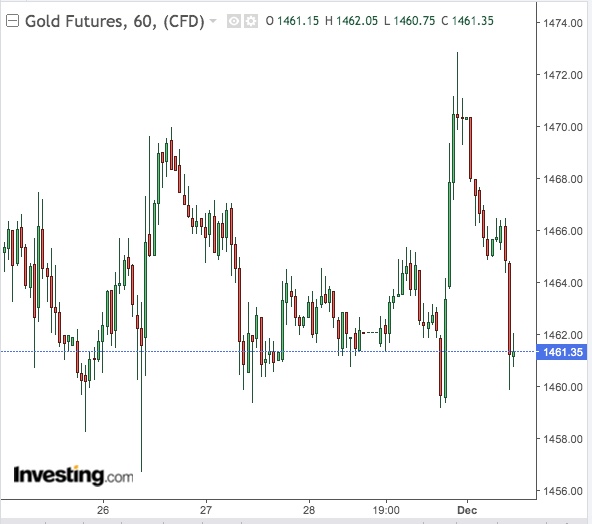 Both for February delivery on New York’s COMEX and , which tracks live trades in bullion, settled last week in the positive.

“Might Santa gift gold at $1,500 by the New Year?” asked Investing.com contributor Mark Mead Baillie in an article on Sunday.

China may ban US officials from region ...

Chart Of The Day: A Surprise OPEC ...