Commodities Week Ahead: Will Jackson Hole Be Boon Or Bane For Oil And Gold?

Will the Fed lend a helping hand to commodity markets this week? Or will it kick oil and gold prices down the alley?

The Federal Reserve holds its annual gathering in Jackson Hole from Thursday through Saturday, with Chairman addressing the forum on Friday. Prior to that, on Wednesday, the central bank will publish of its July meeting, where it cut interest rates for the first time in a decade.

What Will The Fed Do To Address Recession Risks?

For the global financial calendar, the Jackson Hole retreat is as big as it comes: Investors across the world will scrutinize the meeting for any insight into future monetary policy.

While Powell’s speech will be a high point, other discussions that even remotely touch on interest rates can trigger significant market moves, especially with investors psyched up for another Fed cut in September. Any hints of a rate reduction will almost certainly boost crude and gold prices.

Even without adding to the 25-basis point cut ordained by the central bank in July, investors will be watching to see how the Fed responds to recession fears whipped up by the recent inversion of the U.S. Treasury yield curve.

On The Radar Too: ECB Minutes, German PMI

Jackson Hole aside, there will be more central bank watching this week, with the European Central Bank reporting its July on Thursday, a day after the Fed’s.

While the ECB left rates unchanged last month, it did adjust its forward guidance to indicate that rates could go lower. That essentially means the ground has been laid for a potential September cut. It also indicated that it could revive its quantitative easing program in coming months.

Ahead of the ECB minutes, investors will get an update on the health of the euro zone’s and sectors. from Germany will be closely watched after the euro area’s largest economy contracted in the second quarter, fueling fears over the prospect of a recession.

On the U.S. side, market attention will largely be on and numbers, slated for Wednesday and Friday, respectively. At the moment, both are supported by firm consumer confidence, rising wages and falling mortgage rates. 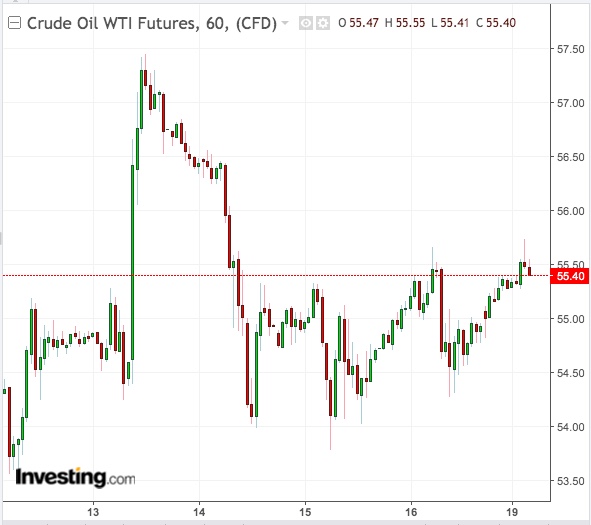 Last week, the biggest swing happened back-to-back between Tuesday and Wednesday, where U.S. crude jumped 4% first on a delay in U.S. tariffs on Chinese goods before plunging 3% in the next session on recession fears and a surge in crude stockpiles. Separately, the CBOE oil volatility index on Wednesday experienced its biggest one-day move since Aug 1, surging 8%.

The gyrations came during a week of contradicting drivers for oil. On Friday, for instance, OPEC issued a damning report on oil demand for this year and next. Crude prices rose nonetheless for a weekly gain, after a “relief rally” in equities tamped down some of the volatility in oil.

Meanwhile, China’s finance ministry initially said last week it had to take countermeasures to the latest U.S. tariffs due on $300 billion of Chinese imports.

Yet, within 24 hours, the Xi Jinping administration was saying it hoped to meet Washington halfway on the trade dispute.To be sure, by Tuesday Trump had partially backed off from his earlier plan to impose tariffs by Sept. 1, delaying until December duties on some Chinese-made items such as cellphones, laptops and other consumer goods, in the hopes of blunting the impact of those on U.S. holiday sales.

Gold bugs, meanwhile, can’t be surer than now of the rally after seeing many years of false starts.

Sought both in stable times, as a luxury good, and bad times, as a safe haven against economic and political troubles, the yellow metal is having its best year since hitting record highs eight years ago.

Hovering at just below six-year highs at $1,525 per ounce, the benchmark contract on New York Mercantile Exchange’s Comex is up 16% year-to-date, for its best annual returns since 2011, when it set an all-time peak of $1,911.60. 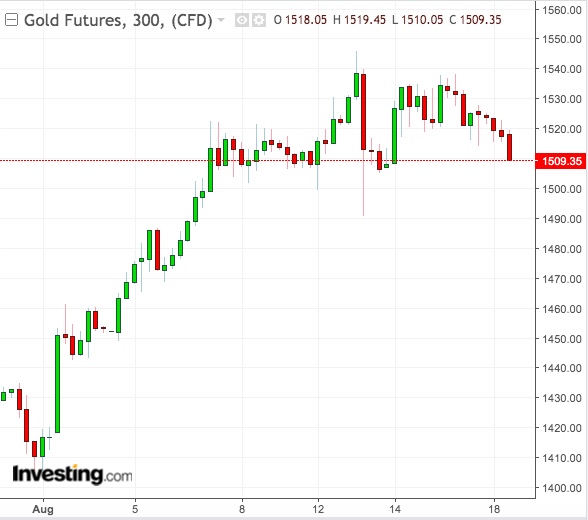 Since the start of August, gold has gained over 6%, or about $90, on heightened trade tensions and sustained buying by central banks responding to a slew of disappointing economic data globally. Speculative support lent by hedge funds and indirect buying of gold via exchange-traded funds have been other major drivers of the rally.

The strong fundamentals for gold and relative price action has fed into gold’s technicals. Investing.com puts Comex gold as a “Strong Buy” on its Daily Technical Outlook, projecting a top-end resistance of $1,599.24 in the near-term.

Some strategists see gold as having a top-end target of $1,820, which if Comex takes out, could set the stage for the yellow metal to match its current record or even write a new one.

In a precious metals note issued last week, Bank of America Merrill Lynch (NYSE:) said central banks could still have a lot of buying to do in gold.

… But Bullion Buyer Beware, Some Say

Others have less lofty targets for gold, despite being somewhat bullish.

After daily rises of up to 2% or more in recent weeks, gold’s ascent has also slowed lately, with investors awaiting more signs of central bank easing before committing to fresh long positions. Due to this, some technical strategists see a potential retracement.

Last week’s Comex gold settlement at below $1,526 might be a signal to reduce long-exposure and raise protective stops, Michael Boutros, a technical strategist in gold, said. “Be on the lookout for possible exhaustion,” he added.