Lots of numbers will be flying about in the coming days on how high Brent crude and its peer WTI could go after last week’s pledge by Saudi Arabia, Russia and other oil producers to remove over 2 million barrels, or 2% of global supply, a day from the market.

The OPEC+ alliance isn’t expecting oil consumers, traders and analysts to look very far into the new year for pricing a barrel. In fact, by having a three-month window for its new production schedule, it is shutting out the trade war and other “noise” that could distract the market from the supply tightness being forced upon crude.

Calculated Game By The Saudis

It’s a calculated move by new Saudi oil minister Abdulaziz bin Salman, and his half-brother and king-to-be, Mohammed bin Salman, to ensure maximum price advantage for the state’s Aramco oil company, which is nearer listing by the day.

Instead of longer-term agreements that could be made irrelevant by market dynamics, the Salman brothers intend to keep OPEC cooperation as elastic as possible, so that they can respond to just about any situation and keep a floor under prices at any time. 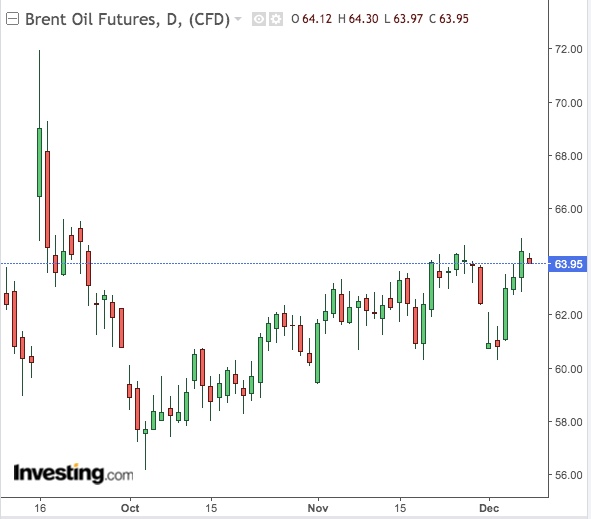 The last time , the global crude benchmark, traded above $70 was just after September’s attack on Saudi Arabia’s oil facilities. On Friday, it reached as high as $64.88. WTI, or , the U.S. crude benchmark, peaked at $59.84, responding to OPEC+’s new production plan. That’s compared with September’s high of $63.38.

So, will 2020 be the year that OPEC gets the oil market back to where it wants? Will the Salman brothers achieve the financial success they dream of for Aramco and a chance to reset the global disrepute brought upon their country by the 2018 murder of the journalist Jamal Khashoggi?

China Will Show By Sunday Where Oil Is Going

Part of the answer to those questions will be known before the end of this week, as the U.S.-China negotiations reach their own high-drama amid the Trump administration’s plan to punish Beijing with new tariffs if a deal isn’t reached between the two countries by Sunday.

Some $156 billion of Chinese imports have been spared by the administration so far in the 17-month trade war.

But these imports are consumer goods and any levy on them will be felt by typical wage earners who have powered the U.S. economy to an 11th record-breaking year. It might not be a good idea for President Donald Trump to make such ordinary citizens unhappy on a year he is seeking reelection. His counterpart Xi Jinping might also not want to risk undermining China’s growth at the start of a new decade simply because of his displeasure with U.S. support for Hong Kong pro-democracy fighters.

Still, Trump wants Beijing to agree to at least $50 billion of farm purchases a year and China wants the U.S. to remove all tariffs before a deal is signed. So, while a partial deal is possible, the standoff could also continue.

Trump Could Decide Where Oil Goes Next If Rally Keeps Up

The other part of the oil price riddle lies, interestingly, with Trump himself.

The U.S. president’s utter dislike for high oil prices is well known. While he hasn’t made the connection directly to his election campaign in the past, Trump understandably suffers from the same anxiety his predecessors had—that pricey oil will lead to pricey gasoline in the U.S. and pricey gasoline could alienate voters.

When Brent hit four-year highs above $86 per barrel in October last year, ahead of the 2018 U.S. midterm elections, Trump unexpectedly allowed a rash of sanction waivers on Iranian oil exports. He also constantly put out negative tweets on oil, to frustrate OPEC attempts to get the market back up. By Christmas eve, Brent was under $50.

There’s no saying when Trump will turn his full attention to fighting OPEC again, though a safe bet might be at U.S. pump prices closer to $3 per gallon. The national average for gasoline has stayed at or below $2.60 for months now, according to the American Automobile Association—explaining why the oil market has remained under the president’s radar for a while.

If oil prices jump sharply in the coming months, OPEC might again find itself pitted against the might of Trump’s Oval Office, Twitter account and his propensity for wanting to win in every fight.

We also cannot discount the possibility of the president toying with more Iranian waivers or a diplomatic maneuver of some kind with Tehran that traders will perceive as meaning more barrels for the market than OPEC intended.

An OPEC member that doesn’t contribute to production cuts because of U.S. sanctions, Iran produced 2.192 million bpd in the third quarter, according to OPEC data. There is no credible data on how much of that oil got out to buyers due to the cat-and-mouse game played by the Islamic republic with U.S. authorities cracking down on its exports.

Prior to sanctions, Iran’s oil production averaged 3.813 million bpd in 2017, again, according to OPEC data.

“If the Iranians get back into the market through some kind of waivers, that itself could be millions of unexpected barrels in additional supply.”

“There’s upward of 8 million barrels of Iranian oil in either floating storage and bonded warehouses off China, waiting to be released. Any idea that those supplies could be legitimized will send smoke signals contrary to the message of tightness that OPEC is trying to convey.”

Also, Saudi attempts now to paint OPEC as a happy, united family may be nothing more than a red herring. Iran was reported to be surprisingly supportive of the production cuts proposed at last week’s meeting—a so-called sign of unity. Yet, the simple logic is higher prices help Iran in whatever limited oil it sells. Give them a chance to do more, and they’ll happily jeopardize the rest of OPEC, which did not lift a finger to help them in their worst crisis with the U.S.

If oil or gasoline prices reach levels Trump won’t tolerate—and they could, given the propensity of headline-reading algorithms that drive the trade—Trump might just get the U.S. State Department to reach out to Iran to offset the market’s momentum.

It’s easy to think Trump won’t do all this because of how U.S.-Iran relations have become strained in the past year, after Tehran’s downing of an American surveillance drone in June. The United States has also accused Iran of masterminding the September Saudi attack.

Yet, politics is the art of the possible. Trump has maintained that he still hopes to negotiate with Tehran. Iran’s president Hassan Rouhani is similarly open, though he says Washington should lift sanctions for talks to begin. With a truce, Trump could have a victory to gloat about on his campaign while Rouhani could quell protests at home from Iran’s hurting economy. 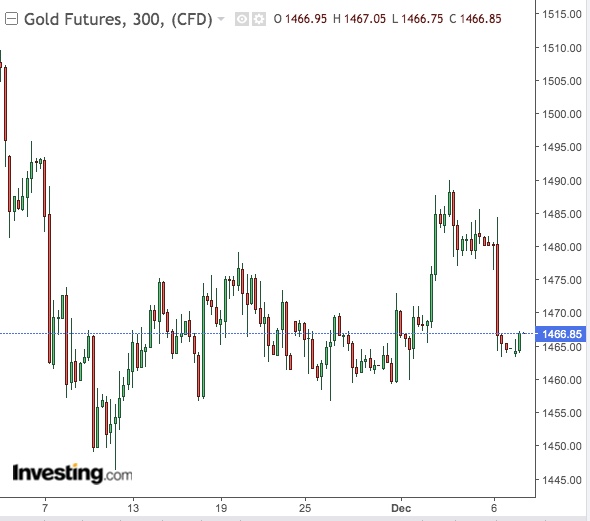 In gold, Friday’s supercharged left almost zero chance for a rate cut when the meets this week, making it even harder for both and of the yellow metal to return to $1,500 levels.

The Fed aside, European central banks, including the , and the are all expected to keep rates unchanged this week, weakening the case for safety hedges like gold. In the U.K. general election, Prime Minister Boris Johnson is forecast to win, paving the way for Brexit.

Investors are terrified of something a year ...