bulls are expected to double down this week in their fight to keep crude prices above, or at least near, $40 a barrel as raging new cases of COVID-19 threaten to send key US cities into another lockdown.

In what could be a fascinating replay of the first quarter, those long oil may have built bullish positions that could be hard to unwind quickly, particularly if the economy suffers more than thought in the new round of coronavirus infections.

After falling in April to as little as -$40 a barrel, West Texas Intermediate futures, the benchmark for US crude, have been steadily rallying, almost uninterruptedly, to around $40. Upward progress from here might prove tricky. 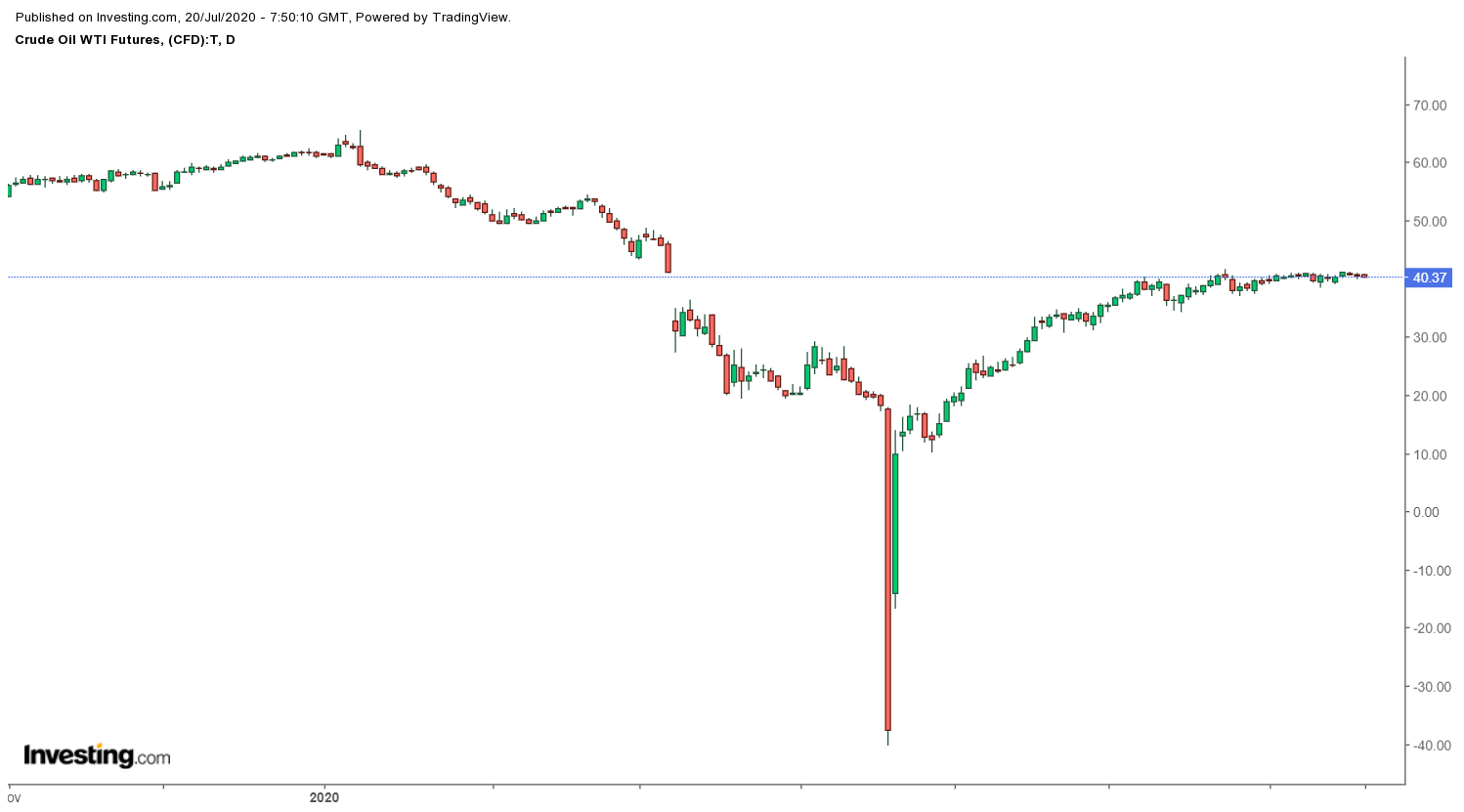 With the world bracing for a fresh COVID-19 onslaught, the United States is again getting hit harder than most nations. Nearly 90% of Arizona’s intensive care beds are being used. Meanwhile, on a single day this month, Florida recorded more new infections than the whole of the European Union.

“Lockdown 2” is, meanwhile, being considered in places such as Houston, Los Angeles and Miami. California, the technology hub of the United States, has already shut down all businesses with indoor activity. If curbs are placed in more cities, they could pose serious threats to oil prices, while lifting gold, the safe-haven for most commodity investors.

WTI was last down down 25 cents, or 0.6%, to $40.50 per barrel by early Monday afternoon in Asia, responding to the latest health worries.

A new round of forced business closures could be excruciating to the United States after the economic devastation wrought by the first round this spring.

“There are growing signs the domestic economy is losing its post-Lockdown (1) steam, with weekly remaining stubbornly high and new quarantine measures being re-introduced in several states,” said Dominick Chirichella, director of trading risk at the Energy Management Institute in New York.

Despite rising caseloads of COVID-19, the Organization of the Petroleum Exporting Countries audaciously took the plunge last week in rolling back production cuts the group has maintained between May and June.

OPEC Rollback On Cuts Akin To Skiing Off Cliff

The Saudi-led and Russia-assisted OPEC+ alliance said it will withhold 7.7 million barrels a day from the market from August onwards, compared with the 9.6 million in July. That’s a 20% rollback.

It’s a move that could be regarded as the oil market’s equivalent of skiing off a cliff, simply because demand for fuel is in question, with Lockdown 2 threatening some major cities.

“OPEC+ is anxious to see higher crude prices as soon as possible but its ambition is likely to be thwarted in the short term by the renewed softness in fuel consumption.”

Kemp said fuel traders and refiners were becoming more pessimistic about the outlook for the global economy and transportation for the rest of this year, even as the crude producers in OPEC+ try to push oil prices higher.

“Price premiums for gasoline and diesel over crude have been flat or falling for almost four weeks since June 23 amid growing anxiety about a resurgence in the coronavirus and a new round of lockdowns.”

More than 137,000 Americans have been killed by the disease and over 3.9 million infected. President Donald Trump, in an interview with Fox News aired Sunday, insisted that the leap in COVID-19 positive cases among Americans were just “burning embers” and the result of increased testing.

“That’s because we have great testing, because we have the best testing in the world,” Trump told the Fox interview.  “If we didn’t test, you wouldn’t be able to show that chart. If we tested half as much, those numbers would be down,” the president said, blaming the numbers mostly on young people “with the sniffles.”

On the precious metals front, gold is expected to push for new peaks above $1,800 this week, after having rallied over the course of six straight weeks so far. 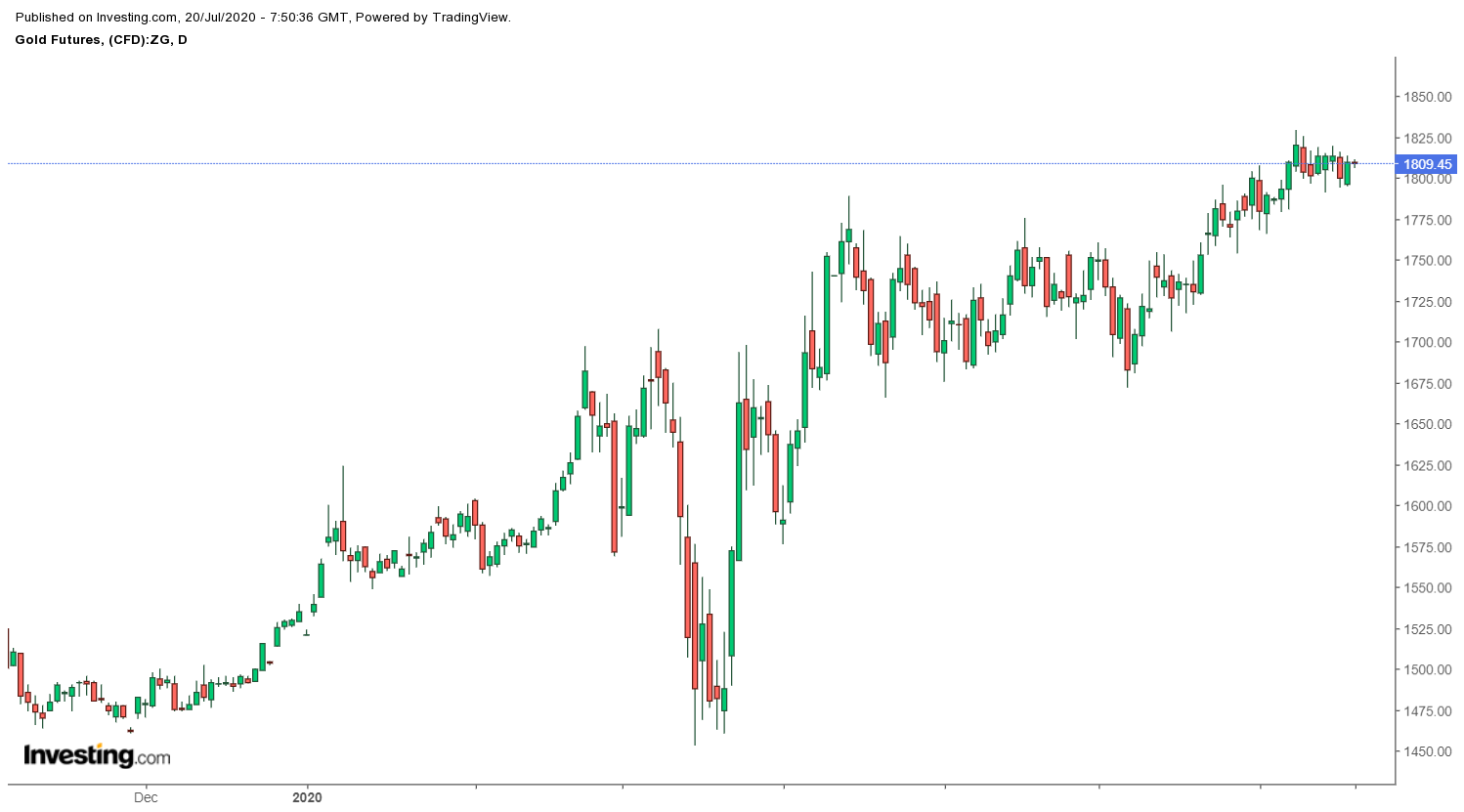 US lawmakers return to Washington on Monday to discuss potential new coronavirus aid programs, while investors also eyed a meeting of EU leaders in Brussels about a proposed stimulus to kick-start their economies.

Coronavirus aside, election risk was also becoming a factor for US-based gold investors, as polls are showing a growing lead by former vice-president Joe Biden over Trump in the run-up to November 3 vote, said Moya.

“Wall Street can’t ignore the polls anymore and (has) start(ed) to price in the risk of a Biden Presidency.”

Disclaimer: Barani Krishnan does not own or hold an interest in the commodities or securities he writes about.