Will get beyond $1,850 this week, and will be able to piggyback on the cyberattack on US pipeline Colonial and consumption numbers in the United States to escape the rut of range-bound trading?

While these are topmost questions for longs in the yellow metal and crude, a broader debate will be raging this week not just in the commodity markets but across the global financial space. 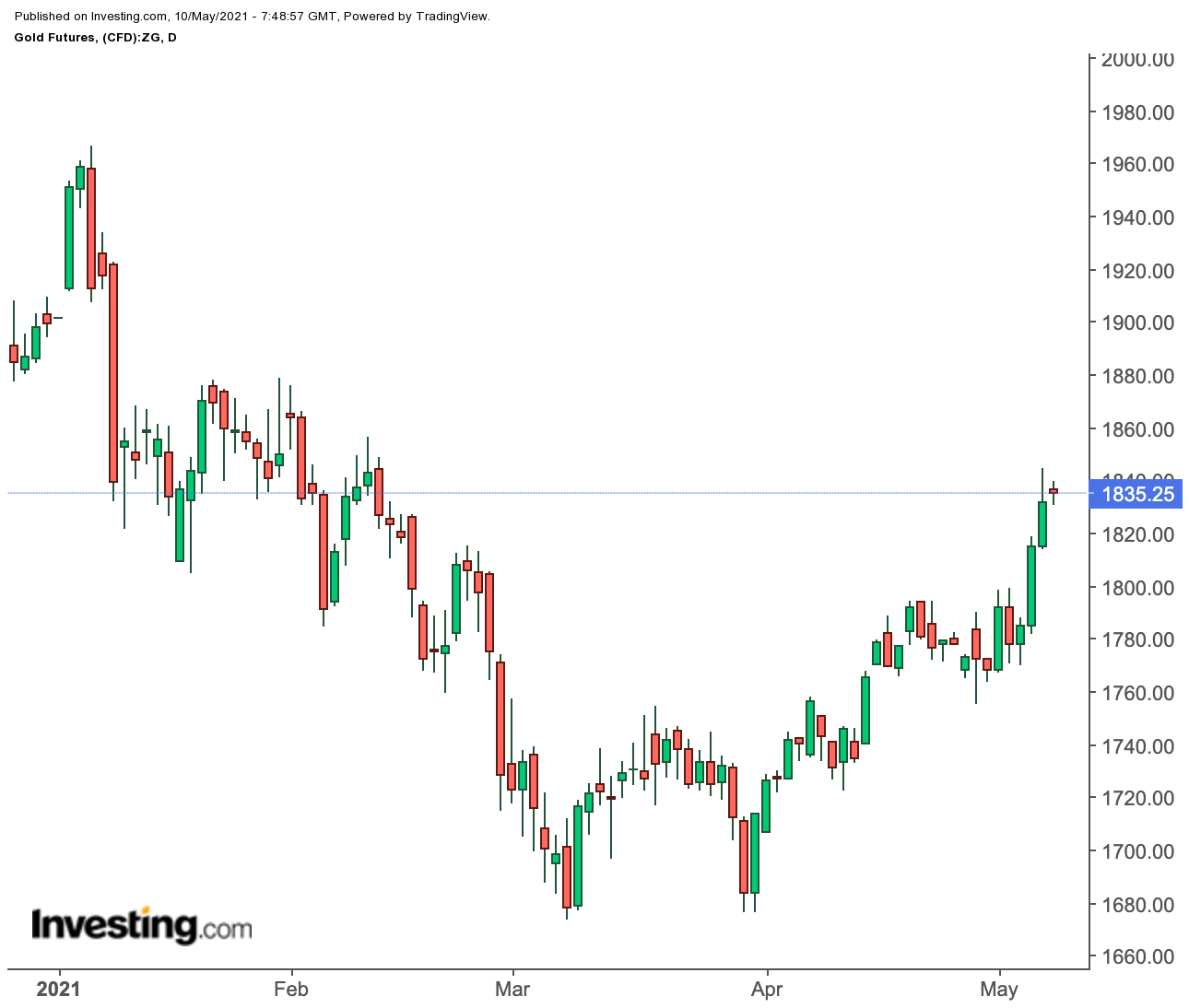 In fact, the wrangling began almost immediately after the US hit the airwaves on Friday. The shock of seeing just 266,000 job additions versus the 1.0 million forecast left many traders speechless at first, before the warring began on where inflation was headed in the near term.

Until last week, the argument on inflation was going almost one-way—that it was a runaway train from surging prices of everything from to , , —and even —and the Federal Reserve needed to taper its easy monetary policy and lift interest rates that were at near-zero to prevent economic overheating. 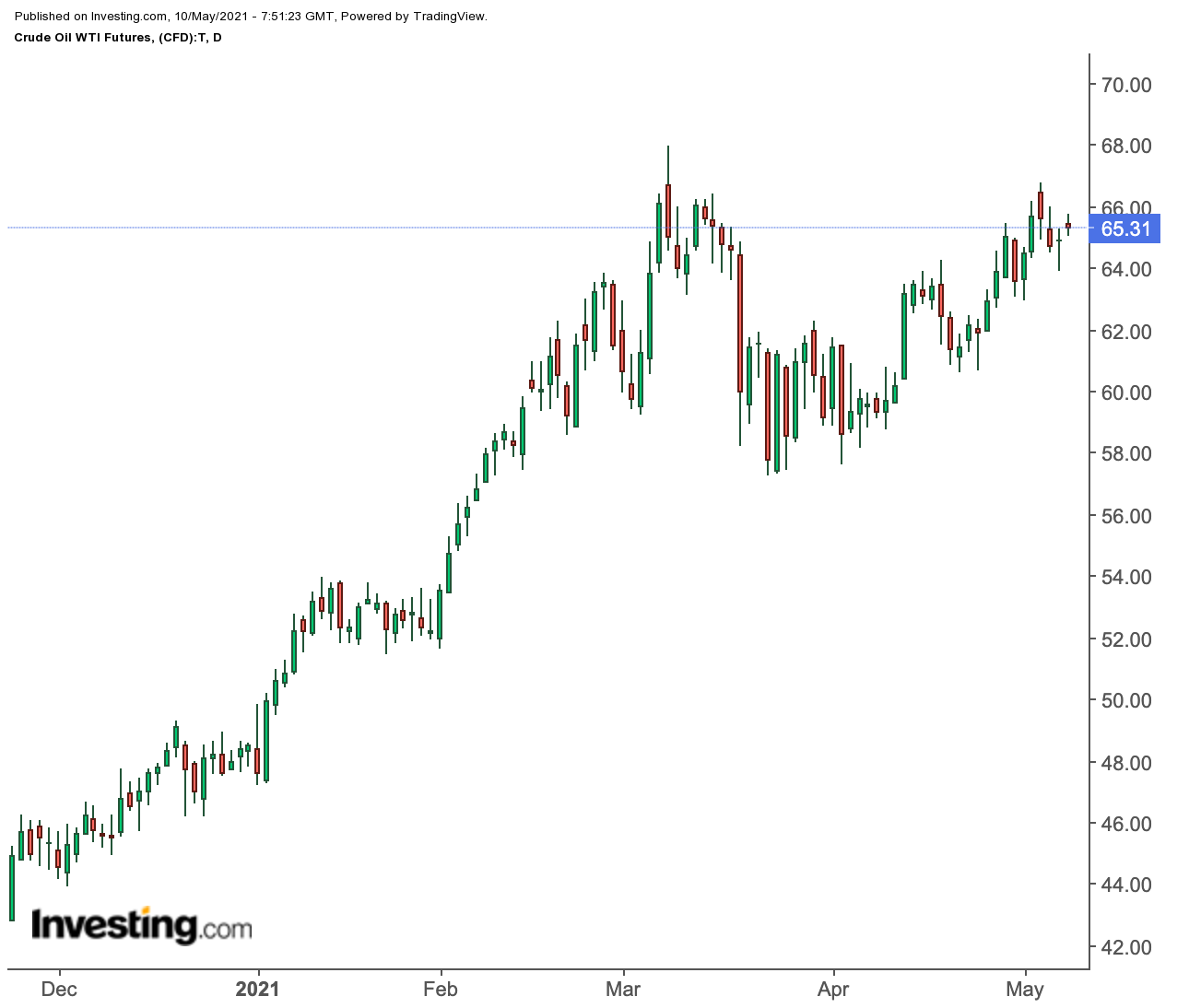 But the stunning slowdown in jobs growth for April—versus March’s revised number of 770,000—has empowered a smaller market constituency, that had backed the Fed’s argument that the price pressures seen since the start of the year were “transitory” and that the scorching economic rebound from COVID will cool in coming months, to become more paced out.

Multiple Fed speakers will be making appearances in the coming days and their comments will be closely watched for the tug of war between value and growth will likely continue in the equities market and spill over into other asset classes, commodities included.

Aside from Fed Vice Chair and Governor , this week’s speakers will be the central bank’s heads for Atlanta ; Dallas ; New York ; Philadelphia Patrick Harker; and San Francisco .

On the data front, Wednesday’s figures for April get top billing on the US economic calendar this week.

figures will be out on Thursday, followed by data on Friday. Retail sales jumped in March boosted by stimulus checks and this effect is expected to carry over into April.

In gold, longs are banking on taking out and closing above the $1,850 level in the coming to pave the immediate return of the $1,900 range and, ultimately, record highs of $2,000 last hit in August.

“Gold’s daily chart depicts that the odds remain in favor of the bulls, as they keep their sight on the 200-daily moving average (DMA) at $1851. Ahead of that the gold price needs to take out Friday’s high of $1843.”

“Only a daily closing above the 200-DMA could call for a retest of the $1900 psychological barrier.”

Mehta said RSI, or the Relative Strength Index, lied just beneath the overbought region, currently at 68.44, that appeared to point to additional upside potential.

“However, if the correction regains momentum, gold prices could fall back towards Friday’s low of $1813,” she said.

“The $1800 threshold could emerge as strong support for buyers.”

After months of anemic action, gold prices suddenly broke out on Thursday, playing catch-up to the rally in a horde of commodities that had been reacting to US inflationary pressures since the start of the year.

Conviction itself has been a rare commodity in gold since the yellow metal came off its $2,000 record highs in August, and meandered for a while before stumbling into a systemic decay from November, when the first breakthroughs in COVID-19 vaccine efficiencies were announced.

Except for gold bugs who had sworn allegiance to the yellow metal, many long investors have been thrown off gold’s path after the travails of the past six months, which included 11-months lows at under $1,675.

Thus, with the recapture of the $1,800 berth on Thursday after a 10-week struggle, multiple price demands were set for gold by traders and analysts unwilling to agree that the yellow metal may finally be on the path of a renaissance.

Gold passed the first test set by naysayers on Friday by almost reaching $1,850—a critical price point it has to cross in order to regain its past glory.

In oil, top US fuel pipeline operator Colonial Pipeline has shut its entire network, without saying when it would reopen, after a cyber-attack involving ransomware on Friday.

Colonial is the main source of for the East Coast and also serves some of the largest US airports. The incident has highlighted how vulnerable US energy infrastructure is to hackers.

A prolonged outage of the network could trigger price increases at gasoline pumps ahead of peak summer driving season, a potential blow to US consumers and the economy as pandemic restrictions are eased.

The outage could also potentially affect oil refineries on the Gulf Coast if refiners are forced to reduce crude processing because part of the distribution system is offline.

Oil put in a second week of gains at the close of Friday’s trade but crude prices reentered range-bound trading on concerns about slowing US jobs growth in April and the COVID catastrophe in No. 3 energy consuming nation India.

New York-traded US West Texas Intermediate crude, the benchmark for US crude, settling Friday’s trade at $64.90 per barrel, up 2% on the week. In Monday’s Asian trade, WTI got to as high as $65.75, piggy-backing on the gasoline rally sparked by the Colonial pipeline outage.